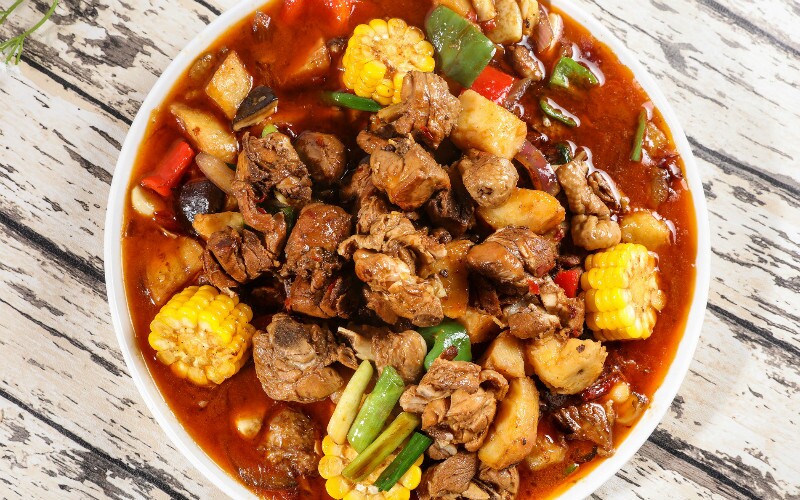 Naan bread is one of the most popular dishes in Xinjiang.

Western China is mainly Xinjiang Province and Tibet. The food reflects the characteristics of the culture, geography, climate, and agriculture of this region.

The region of Xinjiang in northwest China is traditionally home to ethnic Muslim peoples like the Uighur (pronounced wee-ger), so there is no pork or carnivorous animals on the menu. Being a region with lots of pasture, sheep features on top of the menu. Xinjiang is also famous for its fruit, particularly dried fruit.

Xinjiang is mostly composed of deserts and mountains, so arable land is limited. Wheat is the main staple grain, and a few vegetables are grown there, mostly onions, carrots, peppers, eggplants, and tomatoes. Xinjiang is also famous for its fruit, particularly dried fruit.

Being a region with lots of pasture, Xinjiang cuisine features mutton top of its ingredients list. Other protein foods include beef, camel meat, horse meat, and various dairy foods.

Xinjiang is a multi-ethnic area, so the diet of this region varies with ethnic customs, beliefs, and ways of life. There is Uyghur cuisine mainly, but also Han, Kazakh, Russian, Tibetan, etc. The common cooking methods include stir frying, roasting, and steaming.

Where to Eat Xinjiang Cuisine

Halal food and Muslim (Xinjiang) restaurants can be found in cities and towns all over China. As Xinjiang is a poor region, many people have left their hometowns to open restaurants or food stands in other cities, which offer more economic possibilities.

Tibet is a high-altitude, harsh-climate area, where it is hard to grow food, so vegetables and fruits are scarce. It has a distinct food culture. The Tibetan yak has traditionally been the animal of choice for nomadic pastoralists, as it is able to withstand the harsh winters. Yak farmers can live almost exclusively on Yak products, including Yak fat tea.

Traditional Tibetan cuisine emphasizes "calm" tastes, so many dishes do not have any spicy seasonings except salt, scallion, and garlic.

However, influenced by its neighbors India, Nepal and Sichuan Province, Tibetan cuisine also use lots of pungent spices and seasonings, including curries with mustard seeds and chilies.

Due to the high altitude and limited resources, people who live in this region need a diet higher in fat and calories to resist the cold weather. Therefore mainstay foods are meat (mutton, beef, or yak), dairy, barley, and wheat. Their mountain barley is made into tsampa (糌粑 zānbā /dzan baa/), which is very popular and eaten every day by Tibetans.

Some of the most traditional staple foods are yak butter tea, sweet tea, barley tea, or dried meat that is either barbequed or eaten raw.

The common cooking methods include roasting, frying, and stewing.

Where to Eat Tibetan Food

Tibetan dishes are served in Tibetan towns and cities in China around the Tibetan Plateau, as well as its neighboring countries Nepal and India. You can even find Tibetan restaurants in large cities including Beijing, Shanghai, and Chengdu.

Now in larger Tibetan cities and towns, Lhasa for example, vegetables and fresh fish are available in markets. Tibetan cuisine is supplemented by other Chinese cuisine styles, mostly Sichuan Cuisine. However, many restaurants in small cities and towns still serve traditional Tibetan food.

For a tailor-made China tour, please tell us your interests and requirements.