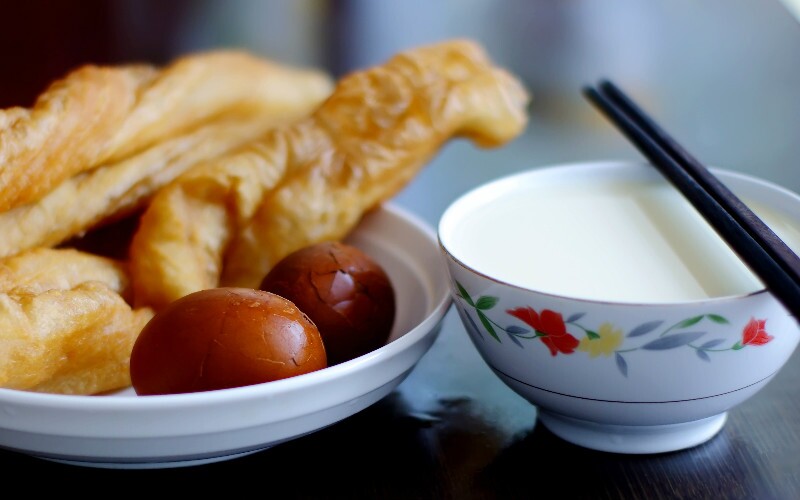 Chinese people are good at making use of all the resources available to make things taste delicious. Tea, originally served as a medicine in ancient times, is now not just a type of beverage, but also an excellent form of seasoning. Here are two delicious dishes made with tea. As a famous snack, you can find delicious tea eggs (茶蛋/茶叶蛋) being served by street vendors in almost every city in China. It's a very simple dish that is convenient to make in the kitchen, as well as being economical.

The ingredients of a tea egg are simple: eggs, water, tea leaves, soy sauce or tamari, star anise, and a touch of sugar.

Although the tea eggs are delicious, it's not recommended to eat very many. People who consume tea eggs on a regular basis would increase their risk of osteoporosis. Traditionally, the tea leaves have to be picked around the time of the Qingming Festival, in early April, to ensure their tenderness. The shrimps have to be plump residents of the local river, and must be captured alive.

Like most stories associated with Dragon Well tea, the legend of the Dragon Well tea shrimp relates to the Qianlong Emperor (1711–99), of the Qing Dynasty, when he toured Jiangnan (a geographic area referring to the south of the lower reaches of the Yangtze River).

One day, according to the legend, the emperor took shelter from the rain in a girl's home, and the host entertained him with a cup of aromatic tea containing freshly picked tea leaves. The emperor was impressed deeply by the taste, but didn't want to reveal his identity, so he just pocketed some leaves and continued with his trip.

Then he took a break in an inn and ordered several dishes, and among them was fried shrimp. The emperor passed the leaves to the waiter to make some tea while waiting for the meal. But the waiter caught a glimpse of the imperial gown underneath and rushed to tell the chef with shock.

Due to the stress he now felt, the chef became flustered, and added the fresh tea leaves into the dish of fried shrimp, because he mistook the tea leaves for the green onions. But what was pleasantly surprising was that the lingering fragrance of the tea and the crunchy texture of the shrimp won the emperor over, and the mistake was looked on favorably.

Thus, the classic dish was born and gradually became a regular home-style dish in Hangzhou. Our customers enjoying dinner in Guilin.

chinese-tea The 7 Most Common Tea Sets in China