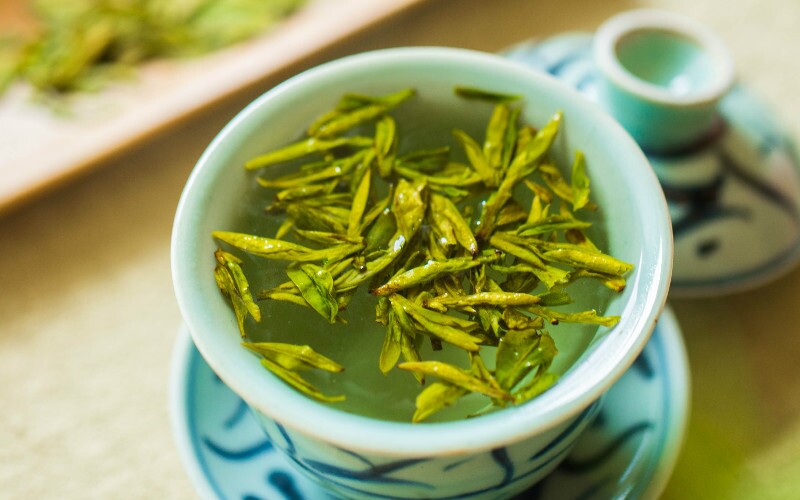 West Lake Dragon Well tea has topped the list of the ten most famous teas in China and is characterized by its green color, delicate aroma, mellow taste and beautiful shape.

The superior geographical environment and good quality water resources around West Lake have contributed much to the growth of Longjing tea, comfirming the saying that "Longjing tea is the best among all of the teas in the world, and the best Longjing tea is produced on Lion Peak Mountain".

Thanks to Emperor Qianlong of the Qing Dynasty (1644-1911), Shi Feng Longjing tea has earned a high reputation.

Legends of Longjing Tea — Admiration from the Imperial Family

The legend went that Emperor Qianlong visited Lion Peak Mountain during his Hangzhou travels, and he saw some ladies picking the tea at the foot of the mountain. He was so interested in their movements that he decided to have a go himself.

While picking the tea, he received the news of his mother's illness, so he carelessly put the leaves in his right sleeve and left Hangzhou for Beijing. He visited his mother immediately upon his arrival in Beijing, and Empress Dowager smelt the fragrance of the leaves from his sleeves and wanted to have a taste.

Emperor Qianlong ordered some tea to be brewed for her, and she found herself completely refreshed after drinking a cup of tea, and she even praised it as a remedy for all ills. From then on, Shi Feng Longjing tea was listed as the tribute tea especially for Empress Dowager.

Both the picking and making processes of Longjing tea are elaborate in order to make sure it retains its high quality and original flavor, according to which Longjing tea is classified into six grades (from superior to the fifth grade).

Much importance is emphasized on the timeliness of the leaves being picked, and the tea leaves that are picked before the Qingming Festival (Tomb-Sweeping Day, April 4/5) or after the 'grain rain' period (6th solar term, April 20-May 6)) are considered to be the top grade, while the leaves picked between Qingming Festival and the 'grain rain' period are considered almost worthless.

The process of making Longjing tea is very strict; It usually employs iron pans for baking the tea, and it involves ten techniques based on different temperatures and moisture, including shaking, grasping, buckling, pressing, grinding, rubbing, and throwing.

A skillful tea-making master knows exactly how and when to use a certain technique according to the changes of moisture and temperature.

Longjing tea is a delicious beverage with potential health benefits owing to its rich antioxidant content. However, it's also rich in caffeine, which could adversely affect some tea drinkers in large enough amounts, so don't drink too much.

How to Make a Perfect Cup of Longjing Tea

Preparation:Get some Longjing tea, a glass cup, and a bottle of mineral spring water ready, and then put three grams (one teaspoon) of tea into the cup.

Clean the tea leaves:Pour a little (about 50ml) heated spring water (80°C to 90°C) into the cup. Gently swirl the cup, and then pour out the water, keeping the tea leaves in the cup. This should clean off any dust etc. on the tea from the manufacturing process.

Brew the tea: pour 150ml (the leaves: water ratio should be about 1:50) of 85°C water in to the cup, and wait for seven minutes until the tea leaves have dilated owing to the absorption of the water.

Drink the Tea: Drink the tea in the following three minutes, and you can enjoy a perfect cup of Longjing tea.