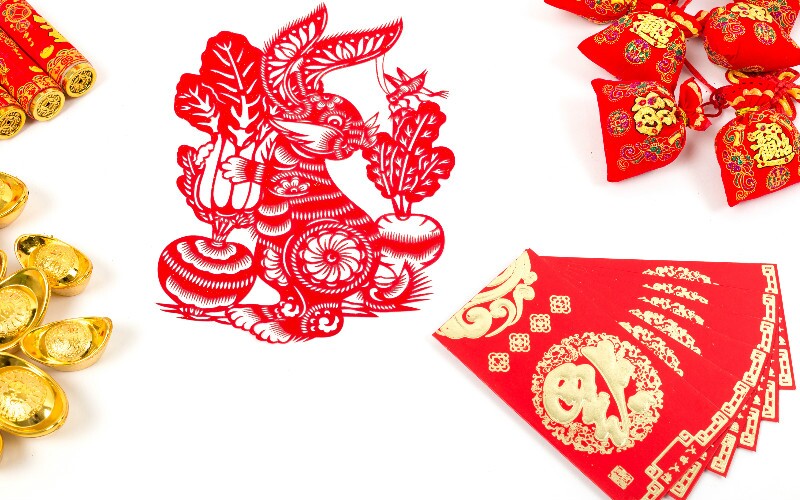 The rabbit is a docile animal loved by everyone, and one cannot help but to touch it whenever it is seen. The Rabbit is not only one of the 12 zodiac signs of China, but it's also closely related to people's lives.

The symbolic cultural meanings of the rabbit are closely related to its living habits, including vigilance, wittiness, cautiousness, deftness, self-protection, and the moon.

The rabbit is always ready to detect its surroundings with its hypersensitive ears and eyes. Just as an old Chinese saying goes, "guarded as a virgin; swift as an escaping hare," the rabbit will stay still when the wind blows and grass bends low, and it will run as fast as a flash of lightning if there is real danger. As a result, the rabbit was used by the ancient Chinese people to symbolize high vigilance.

Symbolizing the Wit and Caution of Men

The rabbit also symbolizes lechery and fertility in traditional Chinese culture due to its prolific reproductive performance, always being ready to mate during any season.

In Western culture, the Rabbit symbolizes new births and prosperity; therefore, it has become one of the mascots for Easter Day along with the chocolate egg.

The rabbit was often painted on the flags of armies in ancient times, and it was said that it would protect those who were born in the Year of the Rabbit, somewhat like the "lucky rabbit's foot" of Western culture.

The Rabbit also symbolizes the moon. According to the ancient legend, Chang'e Flying to the Moon, Chang'e drank the elixir of life and flew to the moon with a white rabbit in her arms; therefore, the ancient people believed the spot in the moon to be the rabbit.

The Rabbit and Chinese Folk Customs

The traditional Chinese character "兎" (literally meaning "rabbit") is a pictographic character of the wild rabbit with long ears and a short tail, which was found in the inscriptions on bones or tortoise shells of the Shang Dynasty (16th century–11th century BC).

Though born wild in nature, the rabbit had a close relationship with the daily lives of the ancient Chinese people, who would get up with the sunrise. The rabbit usually leaves its burrow for food from 5am–7am each day, and it is very fond of eating green grass covered with dew.

The Rabbit ranks in fourth place in the 12 zodiac signs, and it corresponds to "卯" in the 12 Earthly Branches, being the fourth one, referring to the period 5am–7am.

Rabbit meat is forbidden for the Han ethnic people, especially for pregnant women, due to the ugly lips of rabbits. According to the ancient legends, pregnant women will give birth to babies with harelips if they consume rabbit meat during their pregnancy.

The Rabbit and Marriage

Not only does the Rabbit have a profound cultural connotation, but it also has a close relationship with Chinese politics and mythology, and it is an auspicious sign.

It's believed that the Snake is intelligent and good at accumulating wealth, and it's lucky for people to dream about a snake; the Rabbit is docile and versed at guarding wealth. As a result, people born in the Year of the Snake and those born in the Year of the Rabbit are an excellent match, and it's believed that they will have a happy life together if they get married.

The pattern of "A Snake Coiling a Rabbit" is widely used in paper-cuttings for window decorations, colored paintings, and even screens in China, and the fishermen of Shandong Province also use the rabbit as their mascot.