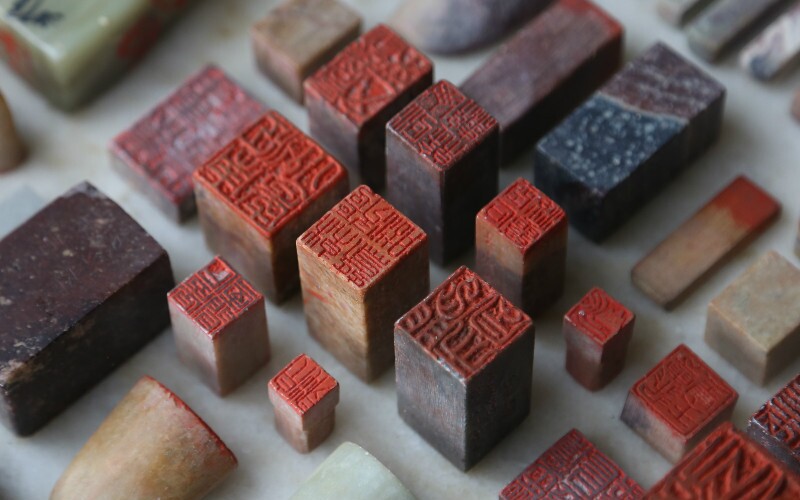 With roots dating back thousands of years, Chinese seals are more than just a unique motif; they are symbolic of identity, status, and culture. Read on to learn what makes Chinese seals a renowned national treasure.

What are Chinese seals?

A Chinese seal (印章 yìnzhāng) is a seal or stamp used to mark important documents, pieces of art, contracts, or any other item that requires a signature.

Typically, the seals are carved into stone, but they can also be made of wood, bamboo, bone, or ceramic. When the seals are used, they are dipped in either red ink or cinnabar paste.

What's the history behind Chinese seals?

The seal was first created in 221 BC. After the first emperor of China, Qin Shi Huang, conquered the six Warring States and unified China, he ordered his first imperial seal to be carved using beautiful white jade. The imperial seal was called the "Xi" (/sshee/) and was only used by those in power.

The emperors who followed used an imperial seal, but the number of seals changed depending on the dynasty and who was in power.

It wasn't until the Ming (1368-1644) and Qing (1644-1912) dynasties that the seal's usage moved from the imperial to the personal, due to the expansion of the feudal arts. Artists began using a stylized seal carving of their name to mark ownership of their works. Individuals also began using a personalized stamp for important documents. These non-official stamps were called "Yin".

How are seals carved?

Seals can have a variety of shapes and sizes. There are four parts to a seal: grip or handle, body or platform, sides, and face. Carvings may be done on the grip portion of the seal or on the entire seal.

How are seals used today?

Seals with different sizes and shapes

Today, seals are used widely throughout China for marking important documents. Seals are often accompanied by hand signatures as a more secure form of identification. Chinese calligraphy works and paintings are still marked with a personalized seal.

Most Chinese people have a personal name seal. Artists and scholars will often collect full sets of name seals.

The carved seal is particularly important for business people to prove the reliability of their business and show adherence to their identity.

Nowadays, along with calligraphy, painting, and wax printing, seal carving is considered a traditional Chinese art.

Look no further than China Highlights. We offer tours to Huangshan city, where there is a famous ink factory on Tunxi Old Street. There, you can tour the factory and even purchase a personalized seal of your own.

Check out our 3-day Essence of Huangshan Tour, which includes a visit to the ink factory. This city-based tour can be combined with other China tours. Just let us know where you want to go.