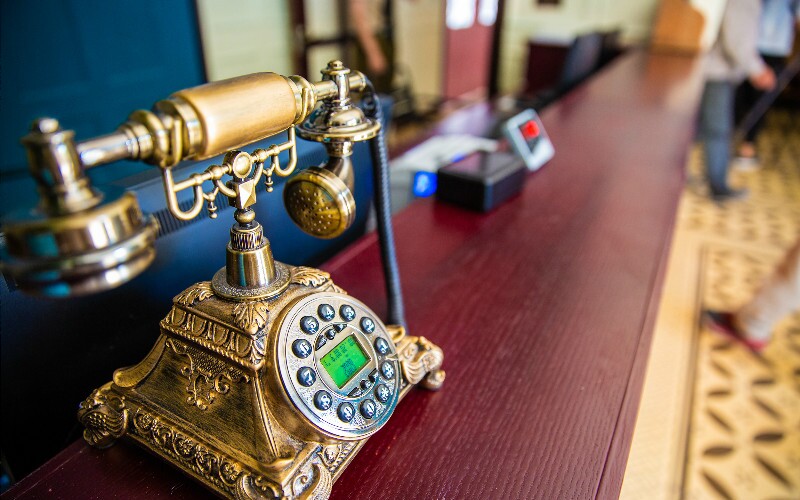 There are three three-story houses built in Western style. Travel there is easy because it is in the Lianhu District in the center of Xi'an and is only about 2 or 3 kilometers or less than 1.5 miles from the main Xi'an Train Station. It is also very close to several other attractions such as the Bell Tower, the Drum Tower and the Beilin Museum. So visiting these sites in the center of Xi'an may make for an interesting day. While visiting his former residence, you can learn about the history of the Chinese Civil War and WWII period in China.

There is a lot with three gray three-story houses built of brick. The houses are quite big and look luxurious. They take a Neo-Gothic look. The site has now the Xi'an Incident Memorial Hall.

Zhang Xueliang was born about the year 1900, though people are not sure about the exact date. He lived a remarkable 100 or 101 years. He was born in China and died in the year 2001 in Honolulu, Hawaii. His life is very unusual and interesting.

He was born at a time when China was being divided up by "warlords" who divided up territory for themselves as the Qing Dynasty rule was ending. He was taught by tutors. During the 1920s, the Japanese tried to exert influence in Manchuria.

When the Japanese invaded Manchuria in 1931, he withdrew with his armies further south. During the 1930s, he was given the task of eradicating the Communist Party from the north. He first fought in the central area of China, and then he fought with another general named Yang Hucheng in Shaanxi Province. Yang Hucheng was a warlord of Shaanxi Province and was also a Nationalist leader.

It is said that they were impressed with the Communist army and decided that the Nationalist government should try to cooperate with the Communists instead of trying to eradicate them. In October of 1936, Chiang Kai Shek flew to Xi'an from Nanjing. Zhang Xueling and Yang imprisoned him. People differ about their reasons for doing this. Then political leaders all over the world got involved. Finally, in December of 1936, they forced Chiang Kai Shek to sign an agreement near the Lintong Museum (临潼博物馆) and the Huaqing Hot Springs in the Lintong District of Xi'an to cooperate with the Communist Party instead of trying to fight them.

For some reason, instead of staying behind in Xi'an where they had their own loyal troops, both Yang and Zhang went back to Nanjing with Chiang Kai Shek. This is strange if they were really traitors. Chiang Kai Shek put Zhang Xueliang and Yang Hucheng under arrest. However, he was very lenient with Zhang Xueliang. In 1949, when Chiang Kai Shek moved to Taiwan, he was taken and put in a villa near the sea. He was under a very loose house arrest, but he was free to go to church. He received many famous visitors and started a famous collection of Chinese art. In the last decades of his life, he became a Chinese art collector and studied the Bible. He became a Baptist. When he was about 90 years old, the he was set free. In 1993, he moved to Hawaii. He died there when he was 101 years old in 2001.

Travel: 69 Jianguo Street in the central Lianhu District of Xi'an. Travel there is very easy because it is only about 3 kilometers or about 2 miles south of the Xi'an Train Station and the Xi'an Bus Station. You can walk there by going directly south on Jie Fang Lu, then going left on Dong Da Jie, and then turning on Jianguo Street.

Nearby Attractions: There are four other attractions in the Lianhu area of central Xi'an that you can visit. The Bell Tower and the Drum Tower are both about 2.5 kilometers or 1.5 miles directly west on Jie Fang Lu. The Beiling Museum is about 3 kilometers to the southwest in the Lianhu area. The Museum of the Eight Route Army Office is nearby at No. 1 Beixin Street in the Lianhu area. In the museum, you can see thousands of photographs and other items from the 1930s and 1940s. You can also see letters written by generals and high political officials. Since all these attractions are close to each other, they can be visited in a day.