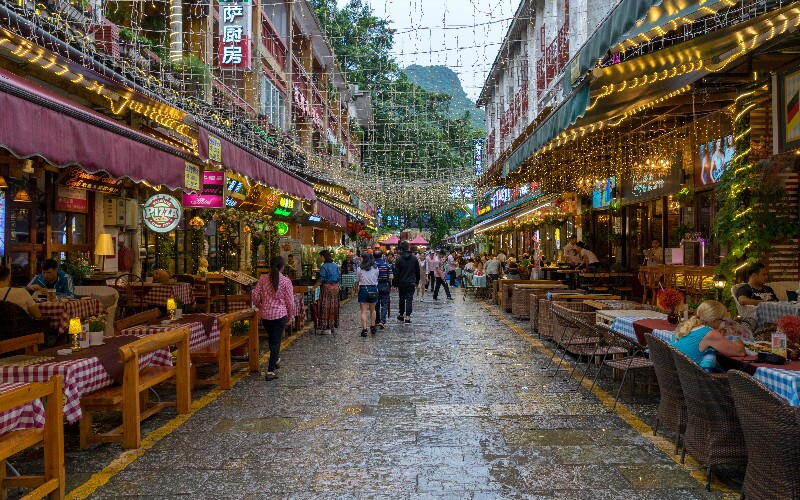 Yangshuo West Street is renowned for its ancient and local architectures, its various and memorable tourist souvenirs, its special and tasty snacks, and especially its beautiful night scene with exotic styles.

The Features of West Street

Over the years, Yangshuo has become popular with foreign backpackers. As one tourist destination, West Street is located in the heart of the town with a total length of 517 meters and a width of 8 meters.

It was paved with local marbles with betel nut patterns, meandering in an 'S' shape, and it still presents a dark with oily gleam after many years.

Visiting West Street, travelers will be surrounded by an array of traditional folk and amazing international elements. Various shops, craftworks shops, painting and calligraphy stores, backpack shops, cafes, and Chinese Kung Fu academies jostle for attention; travelers will be amazed by a multitude of items, from embroidered silk cloth, wax-painted weaving, to embroidered shoes for women.

In addition, everywhere on the street you may find bars and cafes, some run by foreigners, decorated with bamboo rafts, fish baskets, wax-painted tablecloths, and so on.

Yangshuo West Street is said to be a street having the most foreigners visited in China; every year witnesses foreign tourists three times as many as local residents come and go. Some foreigners come to learn Chinese, to spend holidays, to work in the restaurant while learning how to cook Chinese food; others may come for mixed marriage.

It is a wonder that each year hundreds of thousands of foreigners come to the West Street to go sightseeing, live, work and study and at times, foreigners outnumber Chinese. Therefore, West Street is also called "foreigners' street".

A shop on West Street

West Street being modern and fashionable, nearly every store has bilingual shop signs, and more than 20 stores have been opened by foreigners who have settled here. Don't be surprised if you hear English words spoken by elderly Chinese women, for West Street is called 'the global village'.

Whether you are Chinese or a foreigner, West Street is a terrific place to rest, both physical and psychological. West Street will drive all of your pressures and burdens away, and give you a calmer view of life.

It shows different faces at different times: calm and peaceful in the morning, while trendy and modern in the evening. Traveling to West Street is an experience to be with the landscape, with the people, with the soul, and with yourself.

West Street, as the crossroad of traditional Eastern culture and modern Western civilization, is the best place for Chinese people to learn foreign languages and for foreigners to study Chinese. Along West Street run dozens of foreign language schools, training centers, training camps and computer training courses. Those street bars and restaurants are not only places to relish delicious food, but also places to learn and make friends.

West Street is just a few minutes away by foot from the bus station of Yangshuo. Travelers can take Li River cruise (about 4 hours) to get there from Guilin. Yangshuo is also conveniently connected to Guilin by bus service (every 20 minutes). The whole trip takes about one and half an hour.