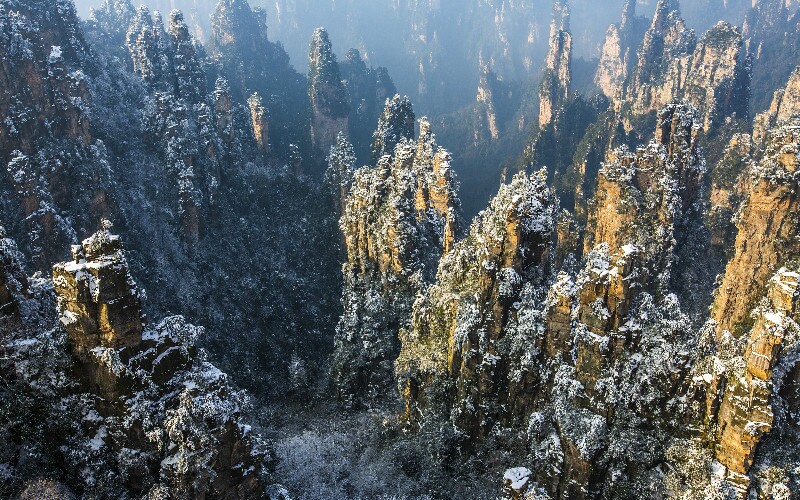 Weather: The weather is dry and cold. February is a little warmer than January. The average temperature is about 7 °C (44 °F). It is cloudy and slightly rainier than January. It snows or rains about 11 days of the month, but usually not heavily. There is about 66 mm of total precipitation.

Many tourists appreciate the park area in the winter since there are fewer people and the lines are shorter. Sometimes, there is snowy scenery in February, and sometimes the access roads are closed. It might be too cold for comfort or stormy, so check the daily weather and forecast>>

Clothing: Wear a coat, gloves, and a hat or scarf to stay warm. If you are planning to hike, then make sure you are dressed for freezing weather. It is important to wear shoes with good traction to avoid slipping on icy paths. Wear snow glasses to protect your eyes if the sun is shining.

Things to Do in Zhangjiajie in February

Take a winter walk: During the winter, you can see frozen ponds, snowy peaks around the valley, and an ethereal landscape of tall rock spires. You might enjoy some solitude. See how the World Heritage site looks up close. The park was honored with World Heritage listing in 1992, and it is a Chinese AAAAA site.

See the Frozen Scenery at Wulingyuan: In February, you'll might still see frozen ponds, snow crusted rock spires, snow on the evergreens, and ice at the bottom of the ravines. The scenery is beautiful in winter. 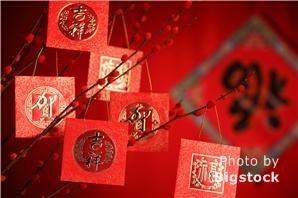 Chinese New Year: The biggest holiday season in China usually falls in the first half of February. It falls in February about two out of three years. During the holidays, there are traditional ethnic festivities in the region as well as tens of thousands of celebrating tourists. There is a lot of traffic at the airports, train stations and bus stations.

Enjoy the Tujia holiday food and traditions: A minority group called the Tujia live in Hunan. They celebrate the Chinese New Year with special ceremonies and foods. You might be able to watch them dance and perform. On the eve of the Chinese New Year, they have a traditional celebration with special dishes and traditional dances. You might enjoy their pork and mung bean dishes.

The holiday season is called a "golden week". Many Chinese families want to travel, and go to the national park then. With their family and friends, they celebrate with special food at the hotels and restaurants, and set off a lot of fireworks in the towns around the park. Foreigners might want to avoid the holiday crowds at Zhangjiajie and see the winter scenery on other days. But if you do go to the region during the holidays, you might enjoy the customs and playing with fireworks.

February is in the low season for visitors except during the Spring Festival period that lasts for about two weeks. The snow is quite charming this month, and the trees are bare except the evergreens. Because of the cold weather, tickets to the scenic spots are inexpensive. Let us arrange hotel accommodations for you. We'll try to arrange accommodations just right for you.

If the Chinese New Year falls in the month, expect crowds at the airport, train stations, and bus stations. Expect high prices for hotel rooms and greater difficulty reserving flights and train tickets. Why wait in line at crowded stations or counters? Book in advance, and we can perhaps deliver your tickets an easy way, and even get them at a discount.

China Highlights offers several Zhangjiajie tour packages. Combine Jiuzhaigou with other major regional attractions such as the Li River cruise in Guilin or the Yangtze River cruise. We can tailor-make a tour to suit your needs. Almost all our customers tailor their tour to suit their budget and interests.

China Highlights offers a 7-day Zhangjiajie tour with a Yangtze River cruise. After seeing the natural highlights and hiking around in the park, relax and watch the scenery pass by on the Yangtze River. Tailor-make a personal or group tour to suit.

Air Quality in Zhangjiajie in February 2015