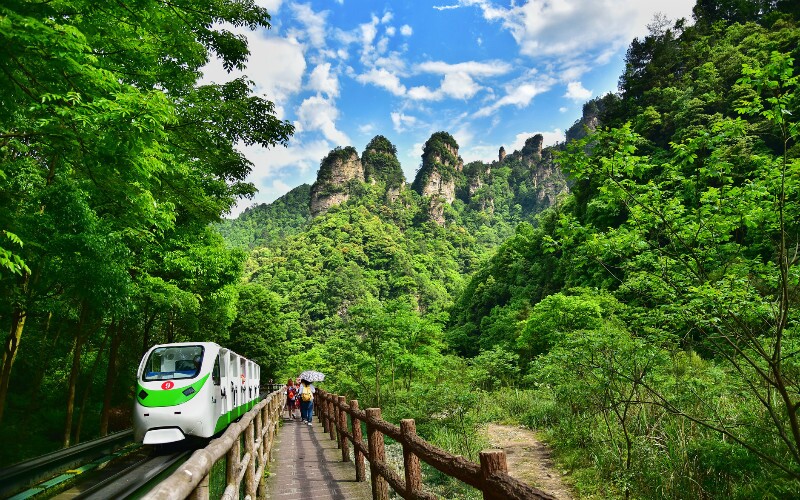 Zhangjiajie's national forest park is one of China's most recognizable landscapes. Thanks to blockbuster movies and a large tourism budget, this natural wonder has become a must see.

Here are some key things you should know about this tourism boom area...

Many endangered species of animals and plants can be found there, which prompted the Chinese government to begin conservation efforts to preserve the landscape of Zhangjiajie National Forest Park, named in 1982, long before the area was of interest to tourists.

Perhaps the most famous of these endangered residents is the Chinese Giant Salamander. This massive amphibian lives in the pools and caves throughout the forest and is strictly protected by the Chinese government.

While tourism is the main industry to the area, the preservation of such a unique and biologically diverse region is at the forefront.

After being declared a UNESCO World Heritage Site in '92 and a UNESCO Global Geopark, visitors to Zhangjiajie are guaranteed to find a pristine setting in the park's many scenic areas.

Tourists flock to the park to witness nature in a unique way. Aside from the many viewing decks and scenic viewpoints, the park offers caves, pools, waterfalls, and towering peaks for exploration.

Outdoor enthusiasts from beginners to professionals are sure to be delighted with its many challenges and rewarding experiences. The most popular natural attractions include:

3. Zhangjiajie is home to the world's longest glass bridge.

If the views alone aren't enough to wow you, try taking them in from the world's longest and highest glass bridge over the canyons below.

At 300 meters (1,000 feet) high, this attraction is definitely not for the faint of heart. The bridge officially opened in August of 2016 and has welcomed thousands of brave visitors in its first month.

This modern feat of engineering offers picturesque views of the canyon below and even offers opportunities for bungee jumping if you want a closer look at the ground below!

Located in Hunan Province, where Chairman Mao came from, Zhangjiajie is a part of the 'rice and fish belt' of China.

Much like the steak and potatoes meals of the American midwest or the fish and chips of Britain, the rice and fish of China is considered the traditional and historic cuisine of the culture.

In Hunan province you can find the best examples of this cuisine in local restaurants across the region. In the Zhangjiajie area, the local dishes include: sour and salted fish, mala ('numbingly spicy') chicken, and sanxiaguo ('three gorges pot' a type of hotpot made by the Tujia people).

5. Zhangjiajie's pinnacles have a history as a heaven for artists.

Long before the photographers descended to capture floating mountain images, the quartzite rock towers and bluffs have inspired generations of painters and visionaries from China.

The landforms and motifs of the area can be found in many Chinese paintings and cultural artifacts. The foggy peaks and lush greenery have become indicative of the Chinese nature aesthetic across many art forms.

Perhaps most famously for Westerners, the mountains are known as the inspiration behind James Cameron's alien world in the movie Avatar.

The floating mountains of his extraterrestrials in turn inspired the naming of Hallelujah Mountain - often with its middle lost in cloud, seemingly floating.

In the present day, tourists can see many artists there to capture the beauty of the park, with their cameras and easels in tow.

6. The wild monkeys are a favorite attraction.

The park is home to hundreds of protected macaque monkeys. During the peak hours, when the park's more popular areas are densely crowded, they hide away in their forest homes. When the crowds start to thin, the monkeys come out to play.

There are signs warning tourists "do not tease the monkeys", but the creatures are familiar with people and will approach you without coaxing (especially if you are eating).

They are playful and unafraid, which makes them a delight to watch as they scamper around the trees and cliffs.

Be prepared to snap a picture or two, but hold onto your camera in case a monkey decides to take a selfie and run!

7. A world record glass elevator offers views minus the hike.

Translated as the 'Hundred Dragons Sky Lift', the Bailong Glass Elevator on the side of one of Zhangjiajie's highest peaks offers quick access to some of the best views.

Climbing 326 meters (1,070 feet) in less than two minutes, the world's tallest outdoor lift is another attraction that caters to more adventurous sightseers.

The engineering success is just another example of China's investment to make the park a growing world attraction.

The elevator brings you to a height taller than the Shard in London and offers frequent rides for up to 50 people at a time.

If you're feeling brave and looking to save some energy, the glass elevator is your ticket to the top. However, you'll do well to avoid the queues...

The Zhangjiajie area is considered a continental subtropical monsoon climate zone. The humidity and warmth that supports the unique ecosystem can also take a lot out of those touring its gorges, though there's a big temperature drop between the peaks and the valleys.

The optimal time for visiting is between April and October when you are sure to see the lush foliage at its peak. The steamy summers and snowy winters can be quite extreme, leaving fall and spring as the most desirable travel times, weatherwise.

We advise you to review the Zhangjiajie weather for yourself to ensure you're best prepared for your trip.

This thrilling mountain offers stunning views for visitors - a must, besides the national park. Featuring knuckle-whitening glass skywalks and cliff-hanging paths, the 'Stairway to Heaven', and the 99-Bend Road, it's another for the adrenaline-driven traveler.

But your options are increasing fast:

Zhangjiajie was once a remote and isolated minority area, but now it has a small airport, high-speed railway lines, and expressways, making it a pleasant few hours journey by land from gorgeous Guilin, and other places you'd probably like to see. See Zhangjiajie Transport>>

However, the mountain areas don't have wide roads (yet), so traffic jams are a problem that you would do well to avoid - both vehicles and pedestrian crowds on peak paths. We can help you avoid the crowds and tour this exotic location smoothly, your way...

Planning Your Trip to Zhangjiajie...