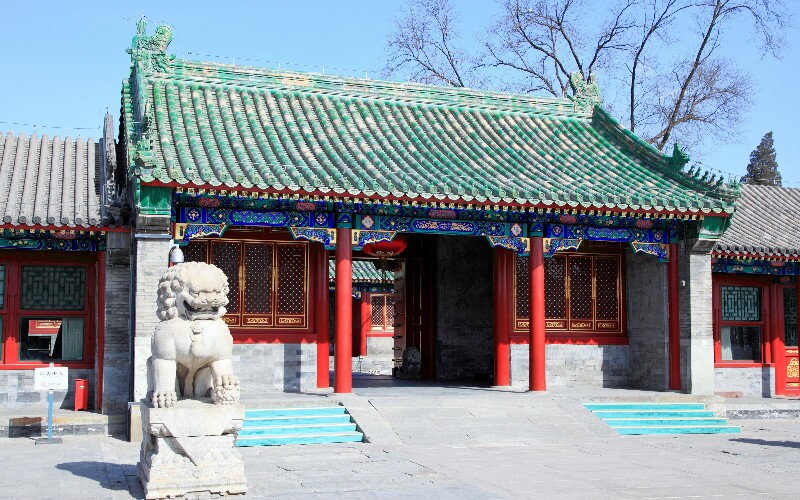 Characteristics: Prince Gong’s Mansion is the best preserved mansion in China and it is also the only mansion built in Qing Dynasty which is open to public.

The main layout of Prince Gong’s Mansion includes three parts: middle buildings, east and west buildings. All those three parts are built along the central axis and composed of traditional courtyards. Those mansions are built widely with the highest level of construction regulations at that time. The most significant signs are the number of gates and rooms. There are five gates, seven main halls, five rear court rooms and seven sleeping rooms. During the Qing Dynasty, general mansions are not allowed to be built under such regulations. Besides, there are three courtyards in each of three main buildings and each of them is a popular tourism spot.

The park in Prince Gong’s Mansion is a unique park. It is also known as Cuijin Park, which is located in No.14 Liuyin Street. The park has a history of around 400 years and covers an area of 28,000 square meters. There are 31 ancient buildings. Reportedly, there was a park which was built in the Ming Dynasty. Prince Gong invited hundreds of skillful craftsmen to build this park into a park with combination of South China classic gardens and North China construction layout. After the construction, Prince Gong’s Mansion used to be the king of those mansions at that time. It can be said that Prince Gong’s Mansion has collected all the essences of those existing mansions in Beijing. People always say that it is the “Pearl in the Shicha Sea”. Some people even believe that it is the model of the Daguan Park referred in the book “A Dream of Red Mansion”

There are various cultural exhibitions held in Prince Gong’s Mansion, such as painting exhibition, furniture and porcelain exhibitions.

Furniture of Ming and Qing Dynasty exhibition in Xijinzhai: Xijinzhai is located at the backyard of the mansion which is one of those featured halls. It used to be the place where Prince Yixin read books, collected antiques and avoided summer heat. The main exhibitions are partition walls and furniture made in the Ming and Qing Dynasty.

Mansion Cultural Exhibition in Yin’an Hall: As the important component of royal culture, the mansion culture provides a platform for the communication of royal culture and folk culture. Prince Gong’s Mansion is the best preserved mansion built in Qing Dynasty. Therefore, it plays an important role in mansion cultural research. The exhibition collects some antiques and profiles preserved in the Palace Museum, the National Museum, and Beijing Art Museum.

Spring and Autumn are the best seasons to visit the Prince Gong’s Mansion. The mansion is full of green trees and pavilions, which can be vaguely seen in this distance.