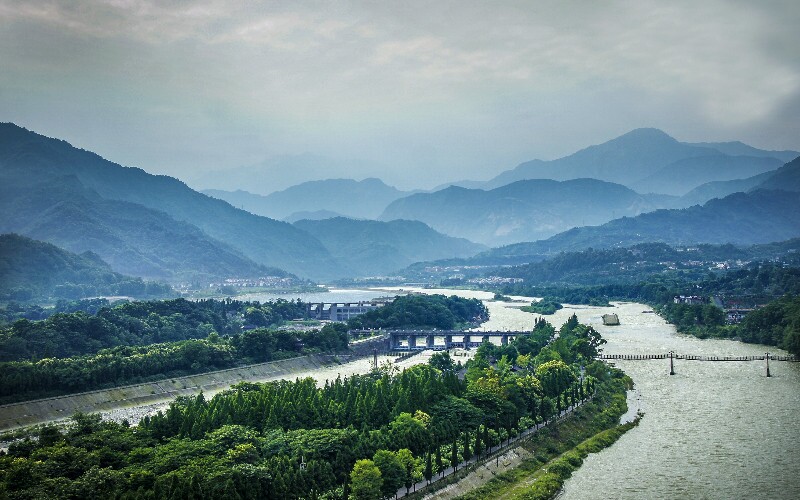 This ancient waterworks about 60 km northwest of Chengdu transformed the region. It is an amazing feat of engineering and construction and is a wonder of the world, and is a UNESCO world heritage site. This waterworks is still used to irrigate 5,300 square kilometers of land in the region. For thousands of years, it has helped to make Sichuan a prosperous agricultural province in China. It was used to not only control flooding on the Min River, but also to irrigate an arid region on the other side of a mountain around Chengdu. Visitors to the site will gain an appreciation of the ingenuity and history of people of the Qin Dynasty over 2000 years ago.

It was built about the year 256 BC to provide irrigation water and to control the Minjiang River. Water surging in the river from annual runoff from the Minshan mountain range destroyed property and killed people. So an official in the Kingdom of Qin named Li Bing decided to build an artificial levee in the river to control the flooding. It is said that he received money for the crucial project from King Zhao of Qin and utilized tens of thousands of laborers. King Zhao sought to strengthen his kingdom and conquer the kingdoms around him.

After its completion, the Dujiangyan system eliminated the flooding and gave the Sichuan area in the Kingdom of Qin abundant harvests. The area around Chengdu became one of the breadbaskets of China. This project greatly strengthened the Qin Kingdom because the expanded agricultural output helped to sustain the kingdom's large army. Within a few decades, a Qin king named Qin Shi Huang used their large army to become the Emperor of China. It was Qin Shi Huang who built the famous Terracotta Army in Xian that has wowed travelers from around the world and who directed the building of the original Great Wall of China.

There are three major parts to this irrigation system. The first is a well designed levee named Yuzui (Fish Mouth) erected in the middle of the river that was shaped to control the amount of water that entered the two channels. The levee is shown in the picture. The second part is the channel of the irrigation project that was cut through a mountain by means of heating the rock and then pouring water on it. The narrow opening to the irrigation system regulated the amount of water entering the system. It is called Baopingkou ( Cherished Vase Mouth ) . It is said that the 20 meter wide channel required 8 years to finish. The third part is a spillway called Feishayan that was dug to discharge water and silt.

Visitors can find many ancient sites nearby. A temple called Erwang Temple was built nearby to worship Libing and his legendary son who helped to design the project. There are statues of both men in the temple, but scholars say that the legendary son might have been a myth.

Since Dujiangyan is only about an hours drive away from Chengdu, travel is easy and quick. The Erwang Temple is right by Dujiangyan.