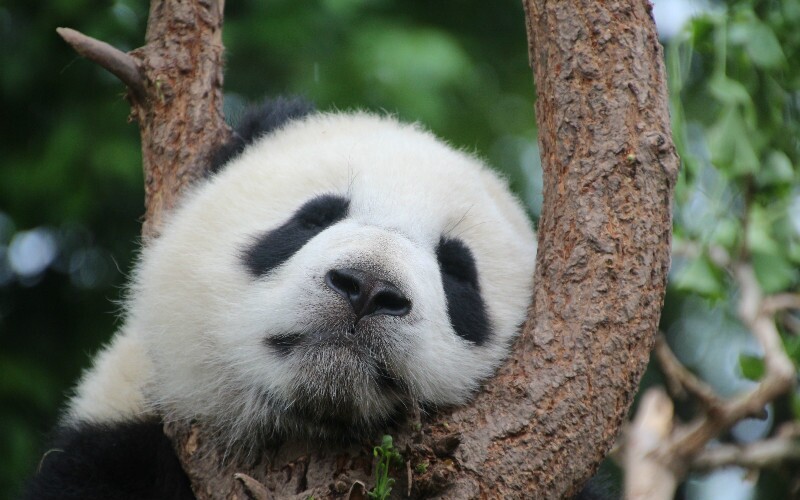 Take photos with a giant panda.

China Conservation and Research Centre for the Giant Panda Dujiangyan Panda Base is a new panda center, established in 2014. However, it is quieter and sees less travelers than Bifengxia Panda Center, so volunteers have more time and chances to get close to the pandas.

Giant Panda Breeding and Research Base is located in the northern suburbs of Chengdu City. It is fully equipped for giant panda breeding, with a baby panda house, several enclosures for adult pandas and cubs, health stations, a giant panda museum, and a laboratory. Thousands of bamboo plants are harvested there to feed the pandas.

The base aims to create an approximation of the panda's wild living environment, and to train the pandas to adapt to wild living, and then releases them into the wild for the continuation and preservation of this charming and endangered species.

There used to be more than 100 giant pandas in Wolong. But it was largely devastated by the catastrophic "5.12" earthquake in 2008. Now the new Wolong Panda Research Center has been opened, and visitors can not only see pandas, but also participate in panda keeper programs to experience taking care of pandas, and take photos with them.

4-Day Wolong Panda Tour: Hike in the habitat of giant pandas, and take care of them.

Beijing Zoo is the largest zoo in China with the largest number of animal species and is one of the best zoos in the world. It was the first zoo to open in China. There is a panda house in the zoo, which is one of the most popular enclosures there.

For those who can make their trip to Chengdu, Beijing Zoo is a good alternative for seeing pandas. Be warned that the panda house in Beijing Zoo is always fully-packed. Our guide knows how to escape the crowds.

Ocean Park is a large ocean theme park and one of several large amusement parks in Hong Kong. You can see hundreds of kinds of marine fishes.
There are four giant pandas in Ocean Park: An An, Jia Jia (the world's oldest living panda, who will be 36 on August 10th 2014), Le Le and Ying Ying. Le Le and Ying Ying are presents from China's central government to celebrate the tenth anniversary of Hong Kong's return to the motherland.

Other China Zoos with Pandas

There are other zoos in China's major tourist cities where you can see pandas, such as Chongqing, Guilin, Guangzhou, and Shanghai.

If you want to see the lovely giant pandas in China, please see the following giant panda tours for inspiration:

Not interested in the above tours? You can tailor-make your own unique tour by telling us your interests and requirements. We will help you design a perfect trip.