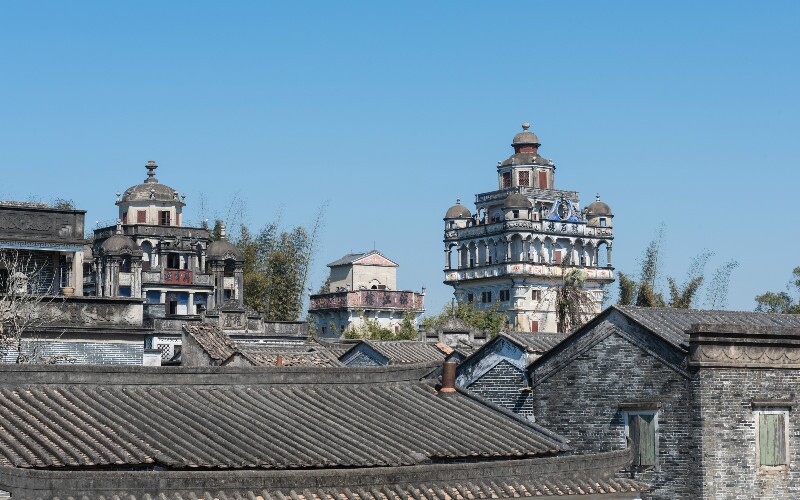 The Kaiping Diaolou, multi-storied buildings scattered around Kaiping County, were listed on UNESCO's World Heritage List in 2007 as China's 35th World Heritage Site. These old buildings were built mainly at the end of the Qing Empire and in the beginning of the 20th century when ethnic warfare, village battles, wars, bandits and lawlessness troubled this area of Guangdong Province.

At the time, Kaiping County was considered a backwater, and its people built these buildings to be small fortresses and watch towers for protection. Overseas Chinese and Chinese returning with wealth that they acquired in other countries funded most of the buildings, explaining why the tall buildings have modern features and often include what seem like Western architectural styles.

There are three basic kinds of towers: watch towers, fortified residential apartment dwellings, and buildings constructed to be emergency refuges. In order to protect themselves and defend their area, guards needed tall little fortresses to use as their base and survey the countryside. These were the watchtowers. Clans and villages constructed fortified residential apartment buildings that they lived in or prepared as a refuge in case of danger. The area is a rice-growing area, and the tall apartment buildings had high foundations and also helped people to escape floods.

Life was hard in the Kaiping area (开平) when the Qing Dynasty collapsed in the 20th century. Kaiping is on the coast, so a large number of people were able to leave to work in other countries, as a result of which some people returned with enough wealth to build fortress dwellings and towers. These were called diaolou in Chinese.

Some buildings have domes and arches, and others employ Western-style columns. Many look somewhat like apartment buildings that were built in cities in the West at that time, but there are bars over the windows and other defensive features that weren't common in the West.

The families and clans competed with one another for prestige and power, and they competed to build the tallest and grandest looking buildings. You can see Spanish or Muslim domes, towers that kind of look like pagodas, and buildings with Western architectural elements for decoration.

It is thought that about 1,800 diaolou structures remain in the area. Some of them are only three stories high, and the tallest is called the Ruishui Diaolou. It was built in 1921, and is 9 stories high. The Chinese government is preserving many as a national heritage, although you are able to visit them and go upstairs.

The UNESCO World Heritage Organization included the diaolou and the villages they are in as the "Kaiping Diaolou and Villages" historic site. The buildings are considered historic because they are in a relatively good condition and serve as a record of the migration of Chinese workers and of the their contact with the West.

How to get to Kaiping City

Once you get there, you can take a taxi or rent a van or perhaps find an organized tour. The various buildings are spread out, but foreign tourists who go there say that it is worth the trip to see the huge buildings amid simple small farms.

Which Diaolou to Visit

The diaolou are located around Kaiping City, not within the city itself.

You'll find some of the most popular ones in Zili Village (自力村), which has watchtowers open to the public that still have original furniture inside. These are the photogenic towers in the lush green fields that you'll likely have seen in the photographs of the area. Climb to the top for the best views.

They are located approximately 20 kilometers and 30 minutes east from Kaiping City by car. The towers here are CNY80 to get into, or you can pay the CNY150 to get entry to the other clusters around too.

Jinjiangli Village (锦江里) was once a flourishing community, evidenced in the three impressive diaolou remaining. One of these is the abovementioned Ruishi Dialou, the tallest surviving structure of the region.

The village still has some families residing here, albeit not many, and a friendly knock on the door of the most beautiful diaolou's neighbor gave us permission to look around their house and get the views from their rooftop for just CNY10 per person.

Sanmenli (三门里) is a sleepy community with one impressive fortified tower in the center of it all. Wandering around here really feels like time has stood still, and you'll be hard-pressed to bump into another tourist.

There are local families cooking up regional cuisine in the nooks and allies for those interested in trying the local flavors.

Want us to help get you to Kaiping?

China Highlights can help you customize a tour to visit the Kaiping Towers and other highlights in Guangzhou. Just let us know when you're booking your tour! If you want to read more about Guangzhou, you can find the top things to do in Guangzhou here.