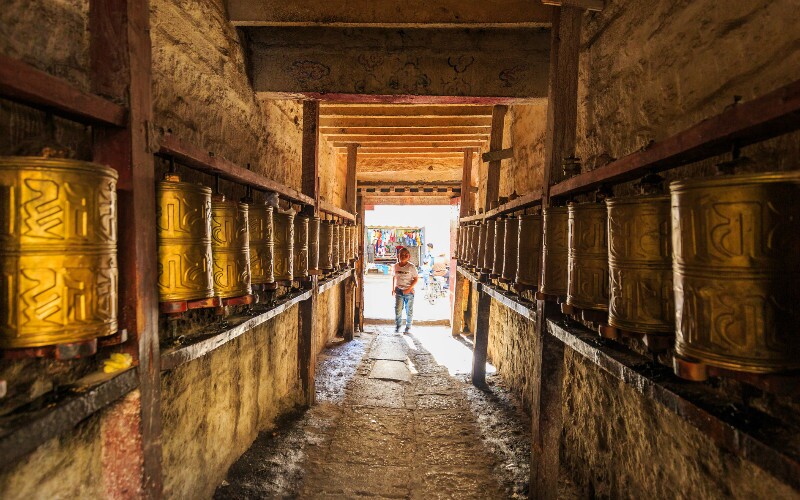 Pabonka means "on top of a giant rock" in the Tibetan language and, given its situation on Mount Parasol, is quite fitting.

It is said that Pabonka was built even earlier than the Potala Palace and Jokhang Monastery. Several famous Tibetan kings and monks meditated here and Pabonka is said to be the birthplace of the Tibetan Alphabet.

Over the many years of its history, Pabonka has undergone many attacks. When the Dalai Lama took asylum in India, many of the remaining monks moved to Mysore, India, establishing a parallel Sera Monastery with more than 3,000 monks.

The former glory of the high-rise palace no longer exists and Pabonka has become a temple of mid-level importance as there only remains a few buildings plus a three-story structure standing on the rock.

Part of Sera Monastery, Pabonka Hermitage is located 8 kilometers (5 miles) north of central Lhasa in the Nyang Bran Valley on the side of Mount Parasol. There's a good road up to it with ample parking.

You can tailor-make your own unique tour by telling us your interests and requirements. We will help you design a perfect trip. We provide a high-quality local guide and private transport to get you to, and to get the most out of, places like Pabonka Hermitage.

This walk has often been referred to as "a sun-filled, energizing hike leading to the lively monk debates outside of the city". Additional hikes can also be taken to the Tashi Choling Hermitage (about 30 minutes) and the Chupsang Nunnery (about one hour).

Hiking from Pabongka Monastery to Sera Monastery is a hidden route, which is seldom seenby travelers.The magnificent bird's-eye view of Lhasa city is another highlight during this hike.