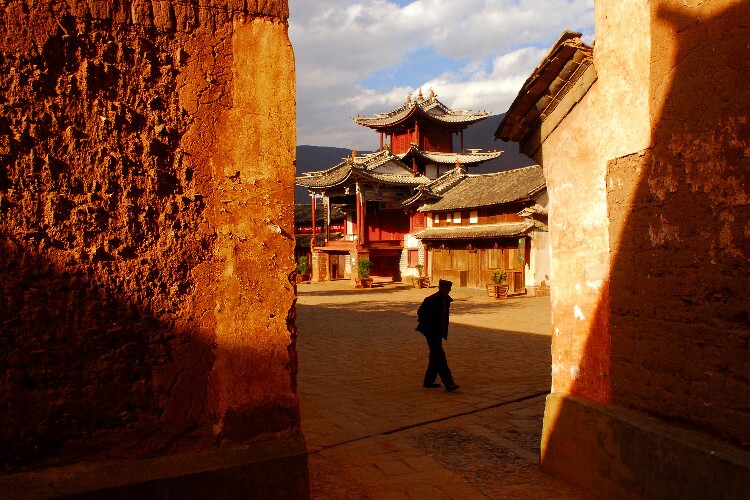 Shaxi Ancient Town: What to See and How to Get

It was an important trading hub on the Yunnan-Tibet Tea Horse Road. People of the town sold a wide variety of homemade items for the passing caravans and opened their houses and offered food to them.

Shaxi Ancient Town was included in the World Monuments Fund’s protection list of 101 endangered sites as early as 2001. Pompeii in Italy and the Great Wall of China are also on the list.

What to See in Shaxi Ancient Town

This street is a fully functioning millennium-old ancient bazaar, with a collection of temples, an ancient stage, shops, a caravansary, a wide street surfaced with red sandstone slabs, ancient alleyways, and ancient village gates.

The west-facing ancient stage on its east side and the east-facing Xingjiao Temple on its west side echo each other and divide Square Street equally into southern and northern halves.

Another alleyway passes in front of the caravansary, leading to the eastern town gate. This was the gate for the road to Dali City, and the north gate led to Tibet, in the days of the Tea Horse Road. Outside the east gate, the Heihui River is crossed by ‘Jade Ford Bridge’ (Yujin Qiao).

Vehicles coming to Shaxi are parked outside the west entrance of this street, where there is a drugstore called Longevity Hall (益寿堂 Yishou Tang), and the visitor service center and a number of inns can be found closer to the carpark.

As there is no large-scale commercial development yet, the only surviving ancient bazaar, once a bustling caravan stopover station on the Ancient Tea Horse Road, remains the same as before on this street. Every Friday, nearby traditionally-dressed residents come to sell a wide range of local items at the bazaar, such as freshly-made goats cheese, traditional Chinese medicine, dried tofu, and wild mushrooms.

The meandering Heihui River runs by the east side of Shaxi Ancient Town from north to south. There is a crescent-shaped ancient bridge, Yujin (‘Jade Ford’) Bridge, across the river, which is set off by distant towering green mountains.

This ancient bridge was the only way for Bai people living in Shaxi Ancient Town to go to work in the fields and to do business the other side of the river. The stone slabs it is paved with have become shiny with a green hue, but are also potholed due to the pressure and footfalls of carriages, horses, and people.

It is a witness to and artifact of Shaxi's long history, greeting and sending off several generations of Shaxi ancestors.

If you stand on the bridge looking back at Shaxi Ancient Town, you can see that the view is like a landscape painting under those mountains.

The Ancient Stage is the soul of Shaxi Ancient Town. Everyone that comes to Shaxi for the first time will marvel at its unique architectural structure and exquisite craftsmanship. It is the most distinctive building on Square Street.

The old theater stage was built in the Qing Dynasty. It is a three-story Kuixing (God of Fate in Daoism) pavilion with a stage in front. It's ornate structure has cornices and 14 flying-eave corners. It is incredible that there is such a gorgeous and delicate antique masterpiece standing under the blue sky and white clouds in this out-of-the-way town.

The stage is situated east of Square Street, directly facing Xingjiao Temple. The distance between them is 20 meters (66 feet). How many viewers can this tiny place hold? A saying from the older generation tells us, "The plays are sung for immortals in Xingjiao Temple."

THE ANCIENT TEA AND HORSE ROAD

Shaxi Ancient Town was once an important stopover station on the Yunnan–Tibet Tea Horse Road between Dali and Lijiang.

In the Tang-Song period, the kingdoms of Nanzhao (738–902) and Dali (937–1094) rose in China’s southwestern regions. The Nanzhao Kingdom was a buffer area between China’s Tang Dynasty (618–907) and Tibet’s Tubo Dynasty (618–842). Connecting the two strong dynasties, the Dali area was one of the main places for economic and cultural exchanges on the Tea Horse Road, and Shaxi Ancient Town played an active role.

After the Tang Dynasty, salt wells were dug in Shaxi’s vicinity. It was the nearest Tea Horse Road bazaar to those salt wells and consequently the salt trade began there. Salt mining, like icing on the cake, added fuel to the fire for the development of Shaxi Ancient Town. Shaxi became the salt capital on this road as well as a distribution center of table salt for Tibet and northwest Yunnan.

Contact us if you are interested in exploring other sites on the Ancient Tea Horse Road. Alternatively, see our Yunnan tours to get some more inspiration.

It is suggested that it is better to stay overnight in the ancient town if you want to go to Shaxi Ancient Town for sightseeing. Here are some suggestions for hotels:

Note: The staff in hotels in Shaxi Ancient Town may not speak English, and the choice of breakfast is limited.

See Where to Stay in Dali — 7 Best Boutique Hotels for alternatives and more information.

The Temple Fair for Prince Shakyamuni

The Temple Fair for Prince Shakyamuni is a grand folk-religion activity held in Xingjiao Temple on the 8th day of the second Chinese lunar month (probably in March).

Then, men and women, old and young, wear colorful clothes and festival accessories. They gather in Xingjiao Temple and then carry the statues of Shakyamuni and Mother Buddha for parades.

The gong and drum team, Buddhism team, Taoism team, and Dongjing (the Naxi ethnicity Taoist ritual form) music team take turns to perform. Coupled with performances on the ancient stage, Square Street is bustling all through the night with dancing, music, and bright lights.

It is held on Shibao Mountain (30 minutes’ drive from Shaxi Ancient Town) from lunar month 7 day 27 to month 8 day 1 (in August or Septmeber). During the event, Bai people from Jianchuan County, Eryuan County, Lijiang, Dali, and other places will put on their national costumes and sing songs in antiphonal style.

How to Get to Shaxi Ancient Town

Shaxi cannot be reached by flight or train. Visitors can take a long-distance bus or book private transport. Shaxi Ancient Town is 128 kilometers (20 miles) from Dali and 107 kilometers (66 miles) from Lijiang.

Visiting Shaxi Ancient Town with Us

Shaxi Ancient Town is located between Dali and Lijiang, so travelers typically visit en route between the two major destinations. Half a day is enough for you to visit Shaxi. Sometimes, travelers also go to nearby Shibao Mountain and stay overnight at Shaxi.

Here are our most popular tour plans that can be customized to include Shaxi or any other changes, for your reference:

Or contact us to create a Dali/Lijiang/Shaxi tour according to your requirements.