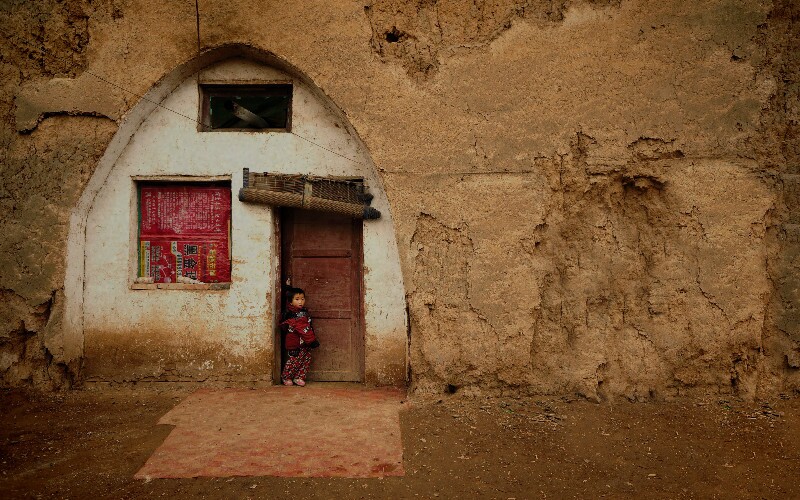 Cave dwellings are unique houses that are very common in the Loess Plateau in Northwest China. This type of residence is very different from the buildings found in cities and is a cultural symbol of Northwest China.

Cave dwellings are part of traditional Chinese culture in rural areas. Read on to discover the characteristics and culture of cave dwellings.

What Are Cave Dwellings?

In the past, the geology of the Loess Plateau was not suitable for building houses but the intelligent people from the present-day Shaanxi, Gansu, and Ningxia regions creatively made full use of the plateau and dug caves for housing. These caves gradually developed into cave dwellings.

A traditional dwelling cave is square-shaped with an arch on the facade, surrounded by mud walls.

This not only symbolizes the idea of a circular heaven and square Earth, but its large arch-shaped window allows sunshine to pour in, making it very cozy to live in.

The Characteristics of Cave Dwellings

The earth that surrounds the indoor space serves as an effective shield to keep warm in cold seasons and cool in hot seasons.

The cave dwellings are cool in summer and warm in winter.

Due to their shape, the earth that surrounds the indoor space serves as an effective shield from the elements, keeping the inside of the structure warm in cold seasons and cool in hot seasons.

Consequently, little heating is required in winter and it is as cool as an air-conditioned room in summer.

Classification of the Cave Dwellings

A cliffside cave is excavated from the side of a cliff and often faces south; a sunken cave is actually a large sunken courtyard that’s as large as 100 square meters (120 square yards); a detached cave is an earth-sheltered building.

History of the Cave Dwellings

The cave dwellings are a famous name card of the north Shaanxi area (geographically referring to the area south of the Great Wall, west of the Yellow River, east of the Ziwuling Peaks, and north of the Qiaoshan Mountains), with a long history of over 4,000 years.

Two ancient stone cities, built in the late Neolithic Period, were discovered by archaeologists in Wubao County, Shaanxi Province, in 2004. The remains of over 70 cave dwellings have been found there.

With the development of society, cave dwellings are also changing and developing. They have become more and more comfortable to live in, owing to new modern facilities that have been added to them.

Geographical Distribution of the Cave Dwellings

Shaanxi cave dwellings are built along the vast Loess Plateau, which is characterized by its beauty and energy-saving attributes.

According to preliminary statistics, the number of cave dwellings in China has reached over 110 million since 1949, many of which collapse each year owing to exposure to floods and mudslides.

The Culture of Cave Dwellings

Qingyang is the cradle of the Chinese farming culture. It is located in the east of Gansu Province and has a moderate climate. It’s also where the cave dwellings originated.

Primitive men used to live in natural caves that were dark and humid, which were very bad for their health, and they were often attacked by wild beasts.

Living Room in the Cave Dwellings

During the Zhou Dynasty, people dug caves out of the mountains to live in, which provided shelter for them and protected them from wild beasts, and the ancient people began to settle down.

As great progress was made in agriculture, the cave dwellings served as homes for the ancient people, who later created a prosperous farming culture in China’s history.

In ancient times, there had been cave dwellings, caves temples, cave workplaces, cave inns, cave schools, and cave shops. Every aspect of people's lives was closely related to caves.

The basic desire of farmers in Northwest China was to dig a cave dwelling, so that they could get married and raise a family. The women were expected to manage household affairs and bring up their children in the cave.

Cave dwellings are now inhabited by millions of people. They represent a typical characteristic of Northwest China’s architectural culture.

You can visit a typical cave dwelling to see its architecture. You can get an overall understanding of how the cave dwellings are built and the wisdom behind their layout.

Get a Taste of the Farming Culture

Usually, cave dwellings are found in the countryside as they were originally created by farmers.

After thousands of years, the cave dwellings still stand silently in the vast land of China, witnessing the development of China’s farming culture. You can see the traditional Chinese farming methods used, which you cannot see in the cities.

You can see how local people spend their entire day and learn many traditional local customs that may already have disappeared in the cities. You can taste delicious dishes with local flavors. If you are interested in cooking, you can learn how to cook a local dish.

The Best Time for Visiting

Every season is good for a tour. In the spring, you can dig up wild vegetables in a farmyard; in summer, you can get away from the heat; in autumn, all kinds of fruit mature and you can see the harvest scenery; in winter, you can sit around a fire indoors, taste local food, and experience some folk customs.

If you want to experience some folk customs and have an in-depth experience of what it’s like to live in a cave dwelling, winter is a good time to visit. If you want to have a comfortable tour, spring and autumn are good choices.

The cave dwellings are different from other attractions in Luoyang. Almost all of them are in the countryside, far away from downtown Luoyang.

The transportation routes are not easy so it is hard for foreign tourists to find them without local guides. A private tour with a private car and local guide is a better choice.

Having a local lunch in the cave dwelling

“Discovery Your Way” with Us

Taking a tour with us is a good choice. We will tailor-make your tour according to your requirements. We will arrange a private car for you and take you directly to your destination.

A local guide will accompany you, and you can travel at your own pace and experience what you like.