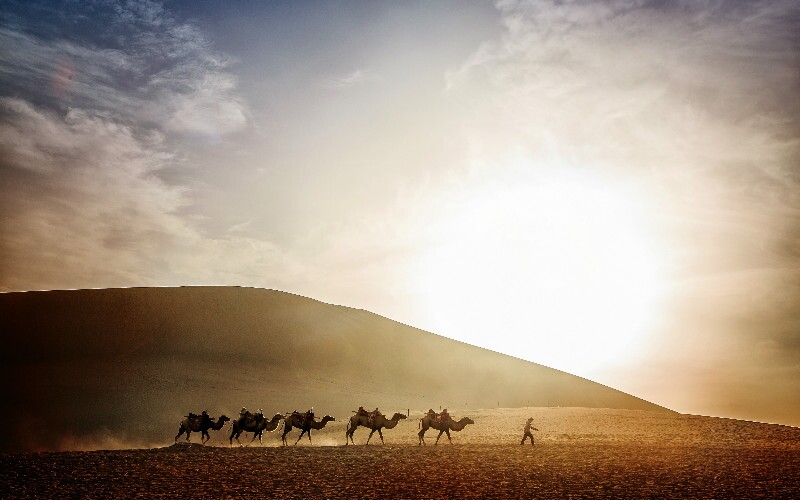 The New Silk Road - The Belt and Road Initiative

The New Silk Road is also called the Belt and Road Initiative. It links countries in Europe, Asia, and Africa together. The plan was initiated by Xi Jinping, President of the People’s Republic of China. The New Silk Road focuses on investment for railway, highway and port construction

Historical Background of the Silk Road The ancient Silk Road was established during the Han Dynasty era (206 BC – 220 AD). The Han Empire expanded to the west and built a trade network with Central Asian countries, and it even connected the empire with Europe. The Han people traded silk, spices, and jade to other countries, and they bought glass, gold, and other noble metals.

The ancient Silk Road acted as an exchange bridge for trade, culture, and religions between China and Western countries. However, due to the Arab conquest of Central Asia during the Tang Dynasty era (618–907) and their attack on Tang trading outposts, the trade diminished.

However, trade boomed when the Mongols established a vast empire covering much of Eurasia. When the Yuan Empire (1279–1368) was overthrown, the Mongols became the enemies. They retained control in Xinjiang and stopped the trade.

When the Manchu Qing Empire (1644–1912) arose in alliance with Mongols, even though they had control of the Silk Road routes, there was little use for overland transport because ship construction and navigation technologies improved substantially. Maritime trade flourished. The Central Asian countries were isolated and developed little economically.

For more detail see The History of the Silk Road in China.

Countries in Central Asia such as Kazakhstan, Kyrgyzstan, Tajikistan, Uzbekistan, and Turkmenistan are just across the border from China. They are closely connected with China's economy.

Middle-eastern countries such as Iran, Iraq, Jordan, Syria, Saudi Arabia, and Turkey mainly trade oil and gas. They look forward to developing other industries and agriculture through cooperation with China.

Other countries on the boundary between Europe and Central Asia such as Azerbaijan, Georgia, Armenia, Ukraine, Belarus, and Moldova are expected to achieve economic integration.

Russia is an important part of the Silk Road Economic Belt. It has a close relationship with Central Asian countries, the countries of the Caucasus region, and Western Asian countries.

If the issues in Afghanistan can be resolved peacefully, then the development of Afghanistan, Pakistan, and India will also be promoted by the Belt and Road Initiative.

Why China's Silk Road Is So Significant has more information about the modern Silk Road.

Traveling Along the New Silk Road The Terracotta Army in Xi'an

There are more than 60 countries along the New Silk Road. Lots of tourism resources are waiting for you to explore them.

Popular Tourist Cities Along the New Silk Road in China Xi'an was the starting point of the ancient Silk Road, and today it's located along the New Silk Road. It's a popular tourist city that is well-known for the Terracotta Army and the long history of ancient China.

Dunhuang is a well-known city that was located on the ancient Silk Road. To protect trade along the Silk Road, the government set up military defenses at Dunhuang. Dunhuang is famous for the Buddhist caves containing beautiful Buddha statues and mural paintings.

Urumqi is in Western China and is close to Central Asian countries. Cities near Urumqi, such as Turpan and Kashgar, were main trading towns along the ancient Silk Road. Urumqi was the first city to construct a tourism distribution center on the Silk Road Economic Belt.

Travel Along the Silk Road with Us If you want to travel along the Silk Road, see our popular itineraries below for inspiration. Our tours are flexible and can be customized.