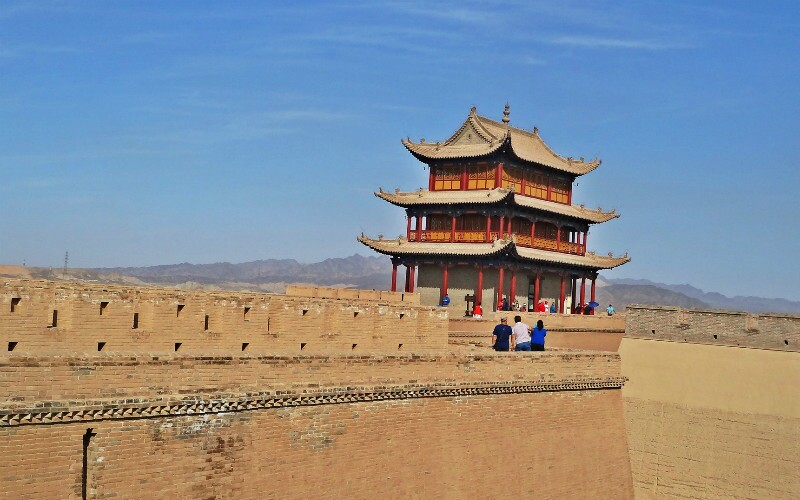 The Silk Road route across northern China changed world history in dramatic ways many times. As the invasion route of armies to Europe and west Asia, the means for important crops and technology exchanges, the route for the spread of cataclysmic plagues, and the avenue for the spread of religions, in many ways the travel and trade route has often changed world history.

Here are some facts showing how the Silk Road has been not only been amazingly significant to China's history, but significant to the history of the whole world.

1. The Longest Land Trade Route Connected the Most Powerful Civilizations

From Shang Dynasty times onwards (1600–1046 BC) until the Renaissance, the most advanced and powerful civilizations in the world were generally centered around the Mediterranean and around the basins of the Yellow River and Yangtze River. In order to trade, products had to pass the world's tallest mountain ranges, some of the most severe expanses of desert, vast distances, and prowling raiders who attacked travelers in between.

Han products were carried overland to the Mediterranean port cities such as Constantinople and Athens, and then the products were transferred to ships for onward transport to Venice, Rome and the other cities of Europe. At the furthest extent, the Silk Road routes stretched about 7,000 kilometers (4,500 miles) from Chang'an and Xi'an to Athens and Constantinople. This was the most important and longest land trade route in world history. See more about the History of the Silk Road.

Han Trade Was Enabled by Stable and Powerful Empires

During the Han Dynasty era, there were two other large contemporaneous empires in the West. These were the Parthian Empire in Central/West Asia and the Roman Empire in Europe and around the Mediterranean. Together, these three empires spanned most of Eurasia and protected Silk Road trade.

During the time of the Han Empire, in the land west of Xinjiang between the Han and the Parthians, three empires rose and fell: the Greco-Bactrian Empire, the Indo-Greek Empire and the Kushan Empire. These three empires also supported Silk Road trade.

Greek: First, the Macedonians and Greeks conquered Persia, and then Alexander the Great followed the Silk Road routes westward to Tajikistan where he founded Alexandria Eschate in 329 BC. This was one of the most important trading cities along the northern route of the Silk Road. The stable and civilized empires that arose after the conquest favored trade.

Huns: In the next major invasion in 370 AD, the Huns arrived at the Volga River, and by 430, they conquered a vast European Empire. By 451, Attila the Hun conquered territory stretching from France to near the Black Sea. It is thought that this invasion contributed to the fall of the Roman Empire and that at least some of the Huns may have originated from the area around Xinjiang.

Arabs: The Arabs invaded the Fergana Valley area in Tajikistan, and then in 751, they defeated a Tang Empire army at the Talas River. Due to an internal civil war, the Tang lost control of Xinjiang. Arab control spread across central Asia, and Islam spread to China. After the battle, for the next 500 or so years, the eastern empires traded much less with the West since they lost control of Xinjiang and enemy countries controlled Central Asia.

Mongols: The next big invasion was that of the Mongols. Genghis Khan united tribes in Xinjiang in 1204, and by 1279, Mongol armies had reached the border of Germany. During their reign, Silk Road trade and travel reached its height, and Mongols founded the Yuan Empire (1279–1368).

There is disagreement among experts about the details about the spread of bubonic plague and the major epidemic episodes. However, there is some consensus that bubonic plague from China spread to Europe and Africa along the Silk Road twice in history.

Bubonic plague in the 6th century: It is thought that the first epidemic began in the 6th century during the reign of the Byzantine emperor Justinian and came through trade and travel on the Silk Road routes. Perhaps half the population of Europe died, and the destruction may have enabled the Arabs to take over Byzantine provinces in the Near East and Africa.

Black Death (bubonic plague): In the 1330s, a large number of natural disasters and plagues led to widespread famine in China. It is thought that the bubonic plague may have first killed millions in the Yuan Empire before it reached Europe in 1347 perhaps via the Mongol army or Silk Road traders. It killed an estimated 75 to 200 million people in Eurasia, and in Europe it may have killed about 30 to 60% of the population.

Silk and porcelain were the two bestselling products over the centuries of the Silk Road trade. Silk was the most valuable export on the Silk Road since it was light, easy to transport, and was said to be worth its weight in gold during the Roman era.

Porcelain was heavier and fragile. Though the Han and later empires were the world leaders in its manufacture, it wasn't until the Song Empire and especially the Ming Empire (1368–1644) that the porcelain industry reached its height in China. Those two empires engaged in Maritime Silk Road trade, built big factories that increased productivity, and exported porcelain on a grand scale. See more about How Porcelain Changed China's Development.

During the main time for Silk Road trade, from the Han era about 139 BC to the end of the Yuan era in 1368, world changing technologies disseminated westwards over the Silk Road.

Paper: Paper is one of China's Four Greatest Inventions. It was developed during the Han era, and the technology reached Europe by the 11th century. Paper revolutionized the publishing and dissemination of information in Europe. Without it, there would never have been a Renaissance and Reformation nor the scientific and industrial revolutions since without it printing would not have been possible.

Gunpowder: It was developed during the Tang Dynasty era around 900 AD. The Mongol army and traders enabled the spread of gunpowder technology when they invaded Europe. It substantially changed warfare and changed the political boundaries. The gun enabled lightly trained infantry to easily kill heavily armored knights for example, and big cannons were able to destroy strong the strong fortifications that were built before gunpowder was known. With big cannons, the Turks were able to destroy Constantinople.

Other important technologies that traveled westwards were silk making and porcelain making, and when the methods were known in Europe and the Islamic world, big industries developed in both areas. However, no comparably important technology traveled east during the Silk Road era. Glass making technology was utilized to produce cloisonné that was a popular import in Europe.

6. The Spread of Western Religions Changed the Culture

Though technology generally moved westwards, religions flowed eastwards along the Silk Road routes. Buddhism affected China deeply from the Han era onwards through the adoption of Central Asian style Buddhism, and Christianity and Islam had less of an effect during the Silk Road times. The Mongols played a big role in spreading Islam by bringing in Muslims to live in their empire via the Silk Road routes.

There was little flow of Taoist or Confucian religious ideas to the west except to the Central Asian areas that they conquered and settled.

7. The Spread of Crops and Animals Eastwards Enabled Population Growth

Sesame, which is important in Chinese cooking, arrived on the Silk Road.

Animals: Central Asian horses were especially prized by Chinese for use by their cavalry to fight nomadic troops. The main reason that the Han Emperor initiated Silk Road trade about the year 139 BC was to obtain the larger horse breeds. Camels were also prized for desert transportation, and sheep were another useful animal.

Crops: Wheat and agricultural crops such as string beans, alfalfa, sesame, onions, cucumbers, carrots, pomegranates, grapes, peaches, figs, watermelons, and other kinds of melons were introduced from the West and improved the diet of the people. Wheat first originated in the Fertile Crescent, and it had been carried to the Gansu Corridor by about 2,800 BC.

Except for rice that wasn't widely grown in Europe and millet, few important crops traveled westwards from the 5th millennium to the 2nd millennium BC.

The Silk Road land routes fell into disuse during the Ming and Qing dynasties era (1368–1912). Ships carried products much more economically and quicker, and enemy countries and raiders were in between. Then the Japanese invasion of China in the 1930s forced the reopening of the Silk Road route because the Japanese controlled the sea routes and ports. From 1937 to 1941, the Soviets delivered armaments that helped the Chinese armies to hold land.

9. The Potential of the Modern Silk Road

Plans are brewing for the re-initiation of Silk Road overland trade. Chinese government leaders keep announcing big plans about train and highway routes to Europe. Now about 40 railway lines connect Europe and China, and Chinese freight shipments can now reach England. These trains travel overland in 18 days. This is much faster than ships that take about a month to go the distance to Europe.

China is also building harbor facilities, ports, and railway facilities in key places around the world. It is estimated that the expenditures amount to hundreds of billions a year. These transportation facilities make exporting products more economical and are designed to help China's industrial production and wealth to increase substantially.

10. The Silk Road Is an Important Tourist Attraction

Partly due to the recent news of the Chinese government's interest in reviving Silk Road trade, there is increased interest in touring the ancient trade routes' main sites in China, Central Asia and Europe. Backpackers are traveling the old trade routes between Europe and China by bus and rail. They stop at the old trade cities to tour.

More foreign tourists are also riding motorcycles and bicycles on trips between Europe, China and northern India. The roads and highways are good enough so that trips between Kashgar and Greece can take a leisurely month by motorcycle.

Within China, there are many sites to explore. Some tourists travel by train, and others travel by tour bus or road to go to the old Silk Road cities between Kashgar, Xi'an and Luoyang. See Top Things to Do Along the Silk Road.

You can enjoy riding in a caravan train like a Silk Road trader in Dunhuang.

Today the Silk Road still tells many stories of ancient times and the exchange of cultures. Take a tour to discover the history and culture of the Silk Road. See our Silk Road tour designs for inspiration (they can all be customized):

All our tours are customizable. Contact us to create a trip according to your group size, time, budget, interests, and other requirements.