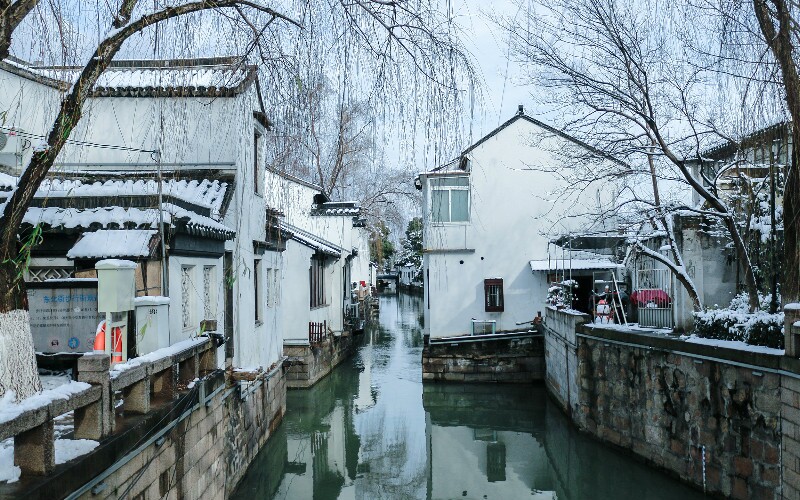 Zhouzhuang, the most popular, developed, and commercialized water town in China, is a popular tourist spot for Shanghai and Suzhou visitors. The town is built amid canals, ponds, and lakes. What makes it special are the old buildings and bridges, boat rides, crafts, and the quaint water town scenery. The canals that crisscross Zhouzhuang have many stone bridges, and some of them are ancient. About fourteen of these were built in the imperial era about 150 years ago or more. Representatives of these are the Twin Bridges, Fu'an Bridge, Zhenfeng Bridge and Fuhong Bridge.

The Twin Bridges: The twin Shide and Yong'an Bridges were built between 1573 and 1619. Each bridge has one square and one round opening that look like ancient keys. They are also known as the Key Bridges.

Fu'an Bridge was built in 1355 during the Yuan Dynasty era. There are towers on all four corners. Each side has carved beams and painted rafters. People enjoy local foods and shopping in the towers.

Zhenfeng Bridge is on the mouth of the Zhongshi River. It was built in the Ming and Qing dynasties and is well preserved today. There are towers on all four corners.

The Bodies of Water

Most of the residences of Zhouzhuang are built next to waterways or lakes. Baixian River runs north of Zhouzhuang west to east. There are several lakes around Zhouzhuang, where you can go boating, and the larger ones are Dianshan Lake, Cheng Lake, and Yuan Lake. Zhouzhuang has about 1,000 households living in old dwellings that were built in the Ming and Qing dynasties and the early Republic of China. About half of the houses are well preserved. A hundred houses have courtyards. Several are excellent examples of traditional Chinese architecture.

Shen's House is southeast of Fu'an Bridge on Nanshi Street. Shen Benren built it in 1742. The compound has seven courtyards, five archways, and more than 100 rooms. It covers an area of 2,000 square meters. There is a gate and wharf for mooring boats.

Zhang's House is south of the Twin Bridges on Beishi Street. It was built between 1436 and 1449 and covers 1,800 square meters or about half an acre. The house has six courtyards and more than 70 rooms. A square pool was built in the middle section. It is an important historical building.

Ye Chucang's Residence: Ye Chucang (1887–1946) was a poet and a statesman. He was known for organizing a group of young people to publicize against gambling and opium and steer people away it. It is on Xiwan Street and has five courtyards. The Main Hall was his studio, and the Rear Hall was a place where he received friends.

With almost a thousand year’s of history, the townspeople people have kept their unique lifestyle as well as exquisite craftsmanship. While shopping in Zhouzhuang, you will find momentos with special meaning. A typical 'south-of-the-Yangtze River' water town, Zhouzhuang abounds in silk, Suzhou embroidery, woven bamboo, and other exquisite handicrafts. Zhouzhuang bamboo weaving (竹编 zhubian /joo-byen/) has a long history and is famous for compactness, strength, and durability. In Cultural Street, see many locals, especially older people, weaving bamboo. Their exquisite craftsmanship gives tourists a deep impression. For tourists, bamboo weavings are made even prettier than usual.

Zhouzhuang stoves (庄炉 Zhuanglu /jwung-loo/) enjoy a high reputation as "the best of copper ware". Coppersmiths pound the flat copper sheets into oblate stoves and hollow out a snow-shape or pearl-shape hole on the lid. They engrave some pictures on the surface of the stoves, such as flowers, landscape paintings, clouds, lines, many kinds of birds and so on. Zhouzhuang stoves are a work of art. A canal in Zhouzhuang Water Town

Major nearby train stations are Shanghai, Shanghai Hongqiao, and Suzhou.

Kunshan Railway Station is on the Beijing-Shanghai high-speed railway and the Shanghai-Nanjing inter-city railway, and serves trains from most major cities, including Hangzhou bullet trains.  From the station, take bus 88 or 111 to New Passenger Station, which takes about 15 minutes, and then take a 1-hour coach to Zhouzhuang. It's about 120 yuan for a taxi from Kunshan to Zhouzhuang.

Travelers from Hangzhou may also go by rail to Jiaxing Railway Station for a shorter train and coach ride to Zhouzhuang.

Check out our China train schedules and booking.

Take a coach to Zhouzhuang from Shanghai, Suzhou, Kunshan, or Hangzhou/Jiaxing (see above).

Vehicles including bicycles are not allowed in the water town because the roads are too narrow. The only available transportation is boats, at about 80 yuan per 8 person craft.

Boat rides: The town is known for small boats like gondolas that ferry tourists for sightseeing around the area. The small boats take about six passengers and have a gondolier who sings for you. Our tours are customizable — tell us your interests and requirements and we will help you to tailor-make a tour.