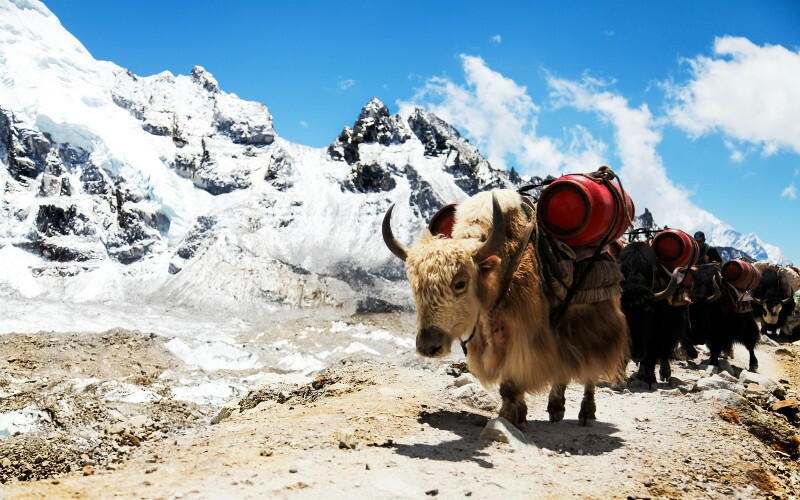 Everest is on the border of Nepal and Tibet, China, on the high southern lip of the Qinghai Tibet Plateau, an area known as “the roof of the world”. It is known as the world's highest mountain that once seemed insurmountable.

Now there are more than 4,000 people have stood on the top of Everest over 9,000 times. Due to its harsh cold and low-oxygen environment, Mount Everest is one of the deadliest mountains in the world.

We've collected some interesting and amazing facts about the thrill of Mount Everest as follows.

Mount Everest is the highest peak in the Himalayan mountains locates on the border of Nepal and Tibet (China). Mount Everest was given a Tibetan name as Qomolangma or Chomolungma, which means "mother of the earth".

In Nepalis, it was called Sagarmatha which means the "God of the Sky". In western countries, it was named after George Everest, a director of the British Surveyor General of India, who was responsible for surveying the Himalayas in the 19th century.

2. Mount Everest is NOT the tallest!

Earth is an obligated spheroid, which bulges at the equator about 21 km radically compared to at the poles.

The Himalayas are being formed by the uplift of the Eurasian Plate caused by the Indian Plate sliding underneath. Everest grows on average 4 mm (0.2”) a year or about 40 centimeters (16 inches) per century.

In 1924, explorer Noel Odell was the first to discover marine fossils on Mount Everest, which proved that the Mount Everest area was originally covered by an ocean.

The limestone and sandstone on the summit were found to be submarine sedimentary rocks formed approximately 450 million years ago.

However, geologists consider that Everest has only been a mountain for about 60 million years, that is since the Indian Plate started being subducted by the Eurasian Plate forming the Himalayas.

Mount Everest must be growing faster now than in the past if that’s so, as it would only take about 2 million years for Everest to rise 8,848 meters at recent measurements of 4 mm/year.

Mount Everest was first climbed on May 29, 1953, by Sir Edmund Hillary from New Zealand and Tenzing Norgay, a Sherpa from Nepal.

Read more on Notable Records of Mountaineering on Everest.

There were more than 5,000 different people who have stood on the top of Everest over 9,000 times.

Kami Rita Sherpa is the person who has climbed Mount Everest the most times. He reached the summit for the 24th time on May 21, 2019.

He has also conquered other peaks higher than 8,000 m in the Himalayas, including Cho-Oyu, Manaslu, Annapurna, and Lhotse.

7. Sherpas are the only people who can climb Mt. Everest without oxygen

Sherpa is a people group who have settled on both sides of the Himalayas. Living in mountainous areas with thin air, a unique physical characteristic has been inherited by the Sherpa people: increased hemoglobin production.

This inherent factor, which allows them to function well in the Himalayas’ low-oxygen environment.

Sherpas have become the best guides on Mount Everest. They not only lead the way for the climbers but also many Sherpas help with carrying supplies for the climbers, as well as some rescue items, camping equipment, etc.

Their packs can weigh more than five times as much as ordinary climbers’! A Sherpa guide gets paid US$5,000 upwards for an expedition.

8. There is a "2 o'clock rule" when climbing Mount Everest.

Because of its cold and unpredictable weather, climbers must be sure to get to the summit by 2 pm, or else experience has shown that they should turn back to avoid being caught in the death zone or short of camp in failing light and falling temperatures, not to mention bad weather.

9. About 300 People Have Died on Mount Everest.

The cumulative death rate is about 2% [2018], making Everest the 7th deadliest mountain in the world. Dead bodies are a common scene on Mount Everest.

When people die climbing Everest, their bodies are left on the mountain and become landmarks for other mountaineers, as it is a great challenge for anyone to carry/drag the dead bodies down due to the physical effort needed in the low-oxygen environment.

The actual climbing time from the lowest base camp to the summit is only a few days, but you have to descend as well. Most of the average 2 months for an expedition is spent acclimating and waiting for suitable conditions to break camp and move on.

You’d need to spend money on oxygen, equipment, supplies, and transport. You also have to pay the Sherpas in your team and pay for their oxygen tanks, equipment, and services.

Our Everest Base Camp Trek takes in a rewarding 4-day mountain hike from Dingri to Tibet’s EBC. It costs a tenth of the price and all oxygen, equipment, supplies, and guide services are included.

Some people will find that the oxygen bottle is missing before ascending the summit and they have to go back to the base camp to replenish.

On average an Everest climber will use 7 bottles of oxygen on the way up and down and each bottle lasts about five hours [Nepal National Mountain Guide Association].

12. Tons of human poop are frozen on Mount Everest.

Campaigners for a cleaner Everest estimate that about 8,000kg of human feces have been left on Everest per year (at an average of 800 climbers per year, that’s 10 kg each), and it is getting to be a serious environmental and health problem.

Feces does not decompose in the permanently frozen higher altitudes. Climbers are required to carry their feces off the mountain now.

There is no specific place for toileting on Mount Everest above the lowest base camp. Climber’s pee and poop in their tents if they can…The frozen ground makes digging latrines impractical and the risk of exposure/frostbite means excreting in a shelter is advisable.

Some climbers carry waste bags and pee bottles for use in their camps, and some wear diapers.

Contact us for a visit to Everest Base Camp. It has a toilet, but there are no toilets further up the mountain.

13. Helicopters can't fly to the top of Mount Everest.

Generally speaking, a helicopter can fly up to altitudes of 5,000 meters. In higher places, like Everest’s summit, the low density of the air means that the propellers can no longer achieve lift. Air evacuation is not possible for those high on Everest.

High-performance helicopters can get to the lowest of Everest’s base camps (altitude 5,200 m in China; 5,300 m in Nepal), which is the most expensive way to get to or from an EBC.

Today's civil aviation aircraft can fly at altitudes of 8,000–10,000 meters. Flying over Mount Everest is not a problem for a plane, though most don’t due to the increased risk of turbulence over high mountains. It is impossible to land on Everest.

The closest (civilian) airport to Everest is Tenzing-Hillary Airport in Lukla, Nepal at about 60 km (40 miles) away. Shigatse in Tibet also has a civilian airport, but most people fly into the Tibet side of Everest using the much larger Lhasa Gonggar Airport.

14. Jumping spiders are the only animals permanently based on Mt. Everest

Jumping spiders are the only animals permanently based on Mt. Everest At an altitude of 6,700 meters (22,000 ft), jumping spiders hides in nooks and crevices on the slopes of Everest, making them one of the Earth's highest permanent residents.

Below the altitude of 6,000 meters, animals such as the snow leopard, Himalayan tahr (a goat-like species), and Himalayan yak can be found.

15. The movie "Everest" was partially filmed on Mount Everest.

The movie "Everest" tells the true story of the mountain disaster in 1996. Parts of the action were filmed on Everest, in a location with an altitude of 4,750 meters in Nepal, which is not far from its EBC. Most of the other scenes were filmed in studios.

Whether you are a mountaineer wanting to see more of Tibet and China, or an ordinary traveler wanting to see the world's most famous peak from a respectful distance, we can help you. We are experts at tailor-making tours to customer requirements.