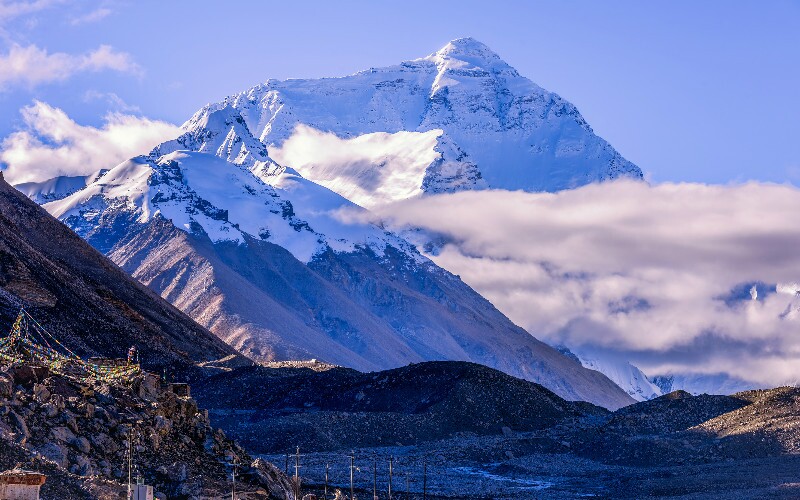 Where is Mount Everest

Located at the junction of the Eurasian and South Asian (Indian) tectonic plates, Mount Everest is in the central part of the Himalayas mountain range, the highest range in the world.

Everest is on the border of Nepal and Tibet, China, on the high southern lip of the Qinghai Tibet Plateau, an area known as a) “the roof of the world”.

In China, it has its north side located in Dingri (Tingri) County, Shigatse Prefecture, Tibet Autonomous Region, on the southern border of the People's Republic of China.

Continue to read more of Mt. Everest China vs Nepal

Mount Everest, at 8,848 meters (29,030 feet) high, is the highest peak of the Himalayas and the highest point on Earth. The privilege of giving the peak its English name fell to British Surveyor General of India, Andrew Waugh, who named it Everest after his forerunner Colonel Sir George Everest, who accepted the honor under protest in 1865.

Everest's location gave Indian and British surveyors access to its Nepal side at a time of lower political tension with Nepal and Indian colonialism and hence its discovery by India/Britain in 1852. However, they could not find out Mt Everest's local names, leading to its eventual English naming.

The Himalayan range where Mount Everest is located was once under an ocean. A large amount of gravel and sand were washed from the land and accumulated, forming a marine sedimentary rock layer with a thickness of more than 30,000 m (100,000 ft)

After that, the Himalayan range rose from the sea and was violently uplifted by the Indian plate sliding underneath. Since then, estimated at about 70 million years ago, it is estimated that the average elevation rise of Everest is about 20–30 m (65–98 ft) every 10,000 years. Currently, Mount Everest is rising by about 4 mm every year.

Interestingly, although Mount Everest is renowned as the highest peak in the world, its peak is not the farthest point from the Earth's center, as our planet bulges by 21 km at the equator.

Mount Chimborazo (6,310 m/20,702 ft) has the furthest point from the center of the world, which is located in Ecuador, South America.

Please contact us to plan your trip to Tibet

Climate and Weather of Mount Everest

The climate of Mount Everest is not friendly to living things, due to its high altitude and thin air. The warmest temperature is only -19°C (-2°F) on the summit, and the coldest temperature is -36°C (-33°F) — but far colder with wind chill.

Everest's summit is so high that it reaches the lower limit of the jet stream, and wind speeds can be more than 160 kph (100 mph) — devastating hurricane force. During the summer monsoon (May to September), precipitation falls in the form of snow on Everest.

Please scan the QR code to contact by WeChat

Mount Everest is a shape of a three-sided pyramid (or tetrahedral) mountain with extremely steep terrain. The three sides, called slopes, face north, east, and southwest and the ridges run roughly west, northeast, and south.

The China-Nepal border runs up Everest's west ridge, across the summit, down the south ridge about 1 km, and east on a minor ridge, meaning the larger portion of Everest is in China (including all of the NE ridge).

The glaciers are fed by snowmelt and monsoon precipitation from the Indian Ocean but are reported to be melting at over a meter in height a year and maybe mostly gone by 2100 due to global warming.

Also to see Most Beautiful Place in Tibet

Yak on the Himalaya

Flora and Fauna of Mount Everest

Below 4,100 meters (13,500 feet), in the valley forests and shrublands, there are animals like peacocks, gibbons, Tibetan bears, Tibetan antelopes, and other animals, some of them rare.

The yak can live at 4,100–4,500 meters (up to 15,000 feet) above sea level. For people in the Everest area, yaks are often used to carry climbing equipment and supplies. They can drag 100 kilograms (220 pounds) of goods across the mountains.

Other animals in such high areas include Himalayan black bears and snow leopards.

Found at 6,700 meters (22,000 feet) above sea level, the black leaping spider is considered the highest permanently resident species on Earth, not just Everest.

As the highest peak in the world, Mount Everest has long been the goal that mountaineers yearn for. Over the years, people have kept on challenging themselves at this peak.

Since the first summit of Mount Everest in 1953, it has attracted considerable attention and climbing attempts.

Although great efforts had been put into decades of explorations, only about 200 people had reached the summit by 1987, and Everest had remained a mountain difficult to climb, even with serious attempts by professional expeditions.

There are two main climbing routes for Mt. Everest. One is via the southern slopes in Nepal. The other is via the North Ridge in Tibet. Other routes are infrequently climbed.

Of the two main routes, the south slope is technically easier and was pioneered by Edmund Hillary (the first climber to reach the summit). The North Ridge is the most difficult route, traversing the world's longest ice slope.

Check more about Climbing Route on Nepal side or China side

Sherpas, which means 'people from the East' in Tibetan, are a people group who have settled on both sides of the Himalayas, mainly in Nepal with some in China, India, and Bhutan.

Sherpas mainly live in the Khumbu Glacier area at an altitude of 4,700 meters (15,400 feet). After generations living in mountainous areas with thin air, a unique physical characteristic has been inherited by the Sherpa people: increased hemoglobin production.

With this inherent factor, which allows them to function well in the Himalayas' low-oxygen environment, Sherpas have become renowned as "the porters of the Himalayas" since the 16th century.

Since the 1920s, Sherpas have been serving as guides and porters for mountaineers. Many of them are trained to speak English and have mountaineering skills. Almost every climbing expedition has a Sherpa.

Sherpas carry climbing equipment up to altitude 8,000 meters to set up safety lines for climbers. The ropes they set up can transfer goods across crevasses, help climbers to keep together, and ensure the safety of climbers on steep or uncertain terrain.

Sherpas have become the best guides on Mount Everest, providing guiding and logistics services for mountaineering expeditions from all over the world.

Plan a Tour to Mount Everest

You can visit Mount Everest from the Nepal side or the Tibet side. You can take a flight to Kathmandu from most major cities in Asia, Kathmandu Airport offers Mountain Flights that fly over Mount Everest for about 50 minutes. >>Read more about entering Tibet from Nepal

If you go from Lhasa, Tibet, the most popular and comfortable way to go by road is to hire a van and a driver. Mount Everest is about 700km (400 miles) from Lhasa to EBC Tibet by road. >>Read more about How to go to EBC in Tibet

To enter Tibet from China's mainland, you need a Tibet Entry Permit, and to visit Mount Everest you need an Aliens' Travel Permit. You need to find a travel agency to help you arrange it.

The typical 8-day Everest itinerary is made up of three days of basic acclimatization, a night for further acclimatization in Dingri, two days for the EBC visit and return to Lhasa, and Lhasa arrival/departure days.

China Highlights offers Permit + private guide service, and all our Tibet tours include our assistance in getting the required permissions. You can just contact us according to your interests and requirements.

Quickly inquire via our WeChat: chinahighlightstour