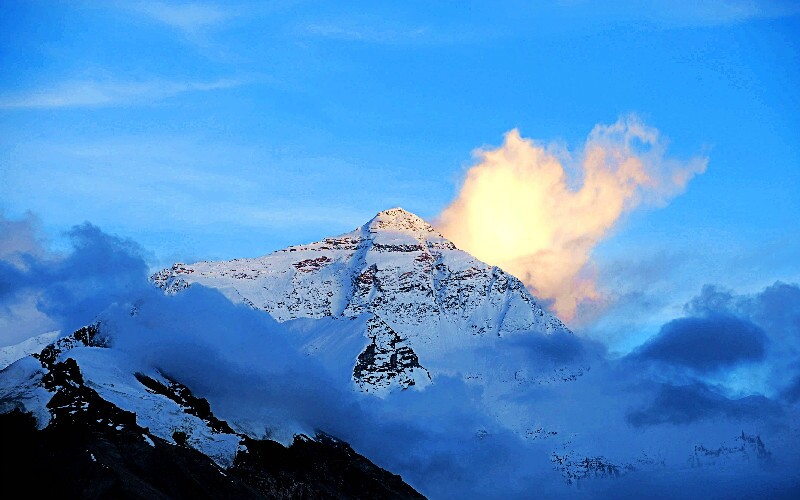 Where is Mount Everest?

Known as the world's highest mountain, with a recent measurement of 8,848.86 meters (29,031.34), Mount Everest is part of the Himalayas Mountain range on the border of Nepal and China. The two countries share its summit with its north slope in Tibet (China) and south slope in Nepal.

The name Everest was originally proposed by Andrew Waugh, the British Surveyor General of India. He chose the name to honor his predecessor in the post, Sir George Everest.

Mount Everest, known as Chomolungma in China, is situated on the high southern lip of the Qinghai Tibet Plateau. The exact location is in Mt. Everest National Nature Reserve in Dingri County, Shigatse Prefecture, Tibet.

To get to Mount Everest, Base Camp (5,180 m/ 17,000 ft) is the closest inhabited point which locates in the Rongbuk Monastery, about 700km from Lhasa by road.

At present, the Everest Base Camp is the best viewing place to watch Mount Everest in Tibet (China) side. Starting from Lhasa, the asphalt road can be easily negotiated by car. It usually takes 3 days including some must-see sightseeing along the way.

See How to Get to EBC in Tibet For a challenging experience, or even a way to acclimate to conditions around Everest, our Trek to Everest Base Camp is a good option. It requires a drive from Shigatse to Old Tingri to start the 4-day trek.

China's Everest Base Camp can also be accessed from Nepal by vehicle via China-Nepal Road or by direct flight from Kathmandu to Lhasa. See more about entering Tibet from Nepal

To visit Everest Base Camp in Tibet requires Tibet Travel Permit for foreign entry. The Permit could be arranged by China's travel agents, such as China Highlights, as part of a tour package. See more about Tibet Travel Documents and Restrictions.

In Nepal, Mount Everest, known as Sagarmatha, is located in Sagarmatha National Park in Khumbu Pasanglhamu Rural Municipality, Solukhumbu District, the northeast district of Province No. 1, easternmost in the Federal Democratic Republic of Nepal.

Access to Everest's Nepal side is less restricted. Everest is about 200 km (120 miles) east of Kathmandu, but road access is tortuous. You can take a flight to Kathmandu from most major cities in Asia.

Kathmandu Airport offers Mountain Flights of about 50 minutes that fly higher than some of the Himalayan peaks, so you will be able to see the world's highest mountain — Mount Everest. However, these flights don't land near Everest.

The Everest Base Camp trek in Nepal is one of the most popular ways of getting to the foot of Everest. Before climbing to the summit of Mount Everest, many choose to do the easy trek to the base camp of Mount Everest to acclimatize. Most of the trekking is at an altitude of more than 3,000 m (9,842 ft).

Mount Everest's Location in the Himalayas

Mount Everest is located in Mahalangur Himal, the highest sub-range of the Himalayas, surrounded by more than 40 peaks with an altitude of more than 7,000m.

The Mahalangurs'famous peaks are (with world ranking):

There are two routes for Mount Everest climbing. The South Slope on the Nepal side was pioneered by Edmund Hillary (the first climber to reach the summit). The colder, less-popular route is via the North Col in Tibet, China.

Camps Location in China side:

There are six camps on Mount Everest in China (the North Col route):

Near the base camp China-side, the options are tent hotels or a guesthouse at Rongbuk Monastery. They provide 10-person shared tents or twin rooms. Basic facilities include a public bathroom, a public toilet, and limited electricity.

On the China side, in Intermediate Camp and Advanced Camp, there are tents for accommodation, a kitchen, dining, washing, and toileting, as well as a tent for medical services. Above, tents are only for sleeping, usually, 4 people sharing.

The lowest camp is set on a flat gravel field and others are on rocky ridges, so there are almost no avalanches and rock-falls on the China side, and its camps are safer.

Everest's North Col in China is considered the most difficult route, traversed by the world's longest ice slope. There are many steep sections, some measuring around 100 m (300 ft) long with an incline of 70 degrees or sometimes even 90 degrees. 8,848 m (29,031 ft).

To climb Mt. Everest from the Tibetan side, you have to get permission from the General Administration of Sport of China.

For an "average person's Everest expedition" with no avalanche risks or ice climbing, but plenty of amazing views and interaction with Tibetan culture, check out our Trek to Everest Base Camp.

If you're just going to see Everest from a distance a tour to Tibet EBC may be preferable: e.g. our 8-Day Lhasa to Everest Base Camp Tour

Camps Location in Nepal side:

There are five Camps on Mount Everest in Nepal (the South Col route):

Nepal's camps are built on undulating glaciers and surrounded by mountainsides, where ice avalanches occur frequently and are the biggest cause of Everest deaths. The 2015 Nepal earthquake caused an avalanche at Nepal EBC that killed 22+ people: the worst Everest disaster.

In the base camp Nepal-side, there are basic lodges, known as "teahouses". Most of the teahouses offer a choice between shared dormitories or private rooms and include comforts such as 24/7 electricity, kerosene heaters, telephone services, Western-style bathrooms, and even Wi-Fi.

On the Nepal side, in Camp 1 and Camp 2, there are tents for accommodation, a kitchen, dining, washing, and toileting. Services of cooks and kitchen staff are provided by mountaineering companies. Above, tents are only for sleeping, 2–4 people sharing a tent.

Climbing Mount Everest on the Nepal side is less physically demanding, but riskier. The riskiest point is the Khumbu Icefall, where 30% of Everest's accidents have occurred, because of frequent ice avalanches.

1. Is Mount Everest in India?

Parts of the Himalayas are in India, across Himachal, Uttarakhand, Sikkim, etc., but Mt. Everest is not located in India. It sits in the highest part of the Himalayas on the Nepal-China border. The elevation of Mount Everest at 8,848 m (29,029 ft) was first determined by an Indian survey, but apart from that India has little to do with Everest.

2. Does Nepal or China own Mount Everest?

Mount Everest is located at the border between China and Nepal, in political and geographical aspects, Everest is jointly owned by the two countries. Mount Everest was divided into two parts, starting from the highest point of the mountain, southern slope lies in Nepal and north in China.

Explore Mount Everest with Us

Although we are not a mountaineering company, we can arrange the things you need to get to Everest and stay at a base camp — Nepal-side or China-side. Whether you are a mountaineer or an ordinary traveler, we can help you. We are experts at tailor-making tours and travel arrangements to customer requirements.

Quickly inquire via our WeChat: chinahighlightstour