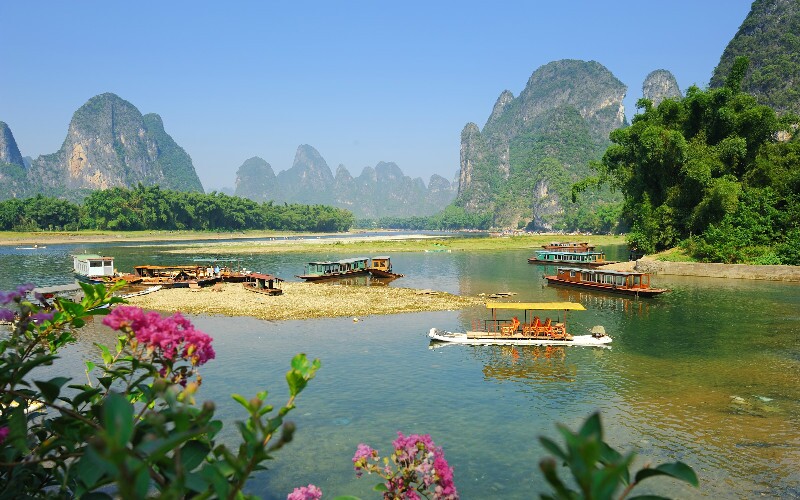 Recommended time: half a day Seven Star Park (七星公园 Qixing Gingyuan /chee-sshing gong-ywen/) has seven small limestone hills, some with steps that can be easily ascended for a view of Central Guilin. Climbing the one closest to the main entrance, straight on from Liberation Bridge (解放桥 Jiefang Qiao /jyeah-fung chyaoww/), would make a good start to the walk, as you can see all the key features of the walk laid out before you: the Li River and Liberation Bridge, to the left the grey face of the Waterfall Hotel, standing between Center Square (中心广场 Zhongxin Guangchang /jong-sshin gwung-chung/) and Pine Lake (杉湖 Shan Hu /shan hoo/), and further left down river Elephant Hill (象山 Xiang Shan /sshyang shan/).

Leaving Seven Star Park by the main entrance, walk straight ahead over Liberation Bridge on the left hand side of the road. In the summer there are often people swimming in the Li River. 300 meters after crossing the bridge’s underpass link road turn left into Zhengyang Pedestrian Street (正阳步行街 Zhengyang Buxingjie /jnng-yang boo-sshing-jyeah/). This is Guilin’s most popular shopping street, with many brand names and cafes, bars, clubs and snacks.

After 300 meters, turn right at the steel "clock tower" sculpture towards Center Square. After 100 meters you can walk onto the square to the left. This is the center of Guilin. There is a large map of the world engraved on the paving and an underground shopping precinct called "Little Hong Kong" below. The black glass face of the Waterfall Hotel looms on the southeast corner of the square. At 8.30pm the hotel face comes alive with a colorfully lit waterfall dancing to well-known tunes. Walking 150 meters down a side street with the Waterfall Hotel on your left you will come to Fir Lake straight ahead. Pine Lake is the most photographed of Guilin’s four navigable artificial lakes. The twin pagodas, the sun tower and the moon tower, standing on an island, are the main features of the lake.

Turning left, walk round the lake for 400 meters until you come to the public toilets, and a place where you can have your photograph taken wearing minority costume. Here turn away from the lake and join Binjiang Road.

After a 300 meter walk along Binjiang Road’s tunnel of Osmanthus trees, you will come to a bend in the road. On the left hand side of the road is the entrance to the part of Elephant Hill Park where you can take pictures with Elephant Hill as the backdrop. Cross the lock system which links the Peach Blossom River with the Li River and you will come to the foot of the Elephant Hill. Guilin’s archetypal landmark, is an easy climb with stone steps and a small pagoda to mark the summit. From there you can look back on the key landmarks of your walk (the Waterfall Hotel, Liberation Bridge and Seven Star Park), and looking down river you can see the distinctive shape of Tunnel Hill (Chuan Shan).

Climbing one of Guilin’s city center hills is highly recommended to get an appreciation of the extent of this small but highly-eulogized city. Guilin spreads north and south along the banks of the Li River, but east and west is enclosed by rows of pointy hills like dragon’s teeth.

China Highlights is your China travel expert. We can help you customize a walking trip in Guilin.