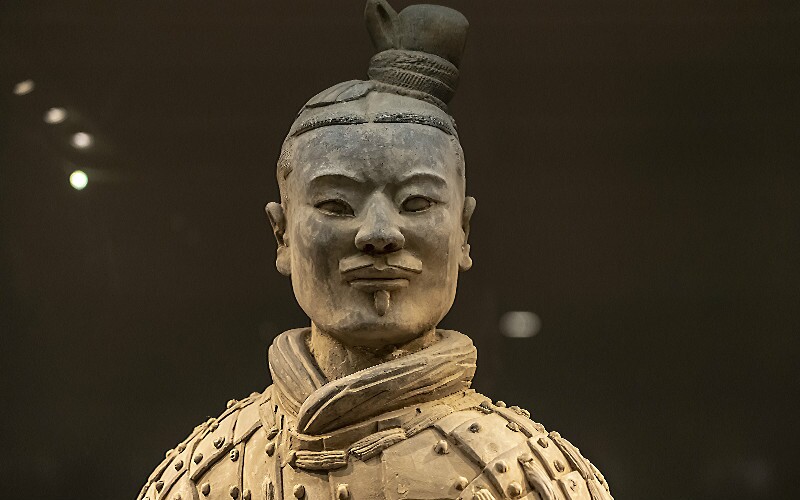 The Qin Empire (221–206 BC) wrought havoc with the people and was the first big empire in the region. It set the course for future empires. The Qin Empire was amazing in its conquests, construction, and power, but after only 15 years, the people rebelled, and it fell abruptly.

These 10 facts will help you understand the Qin Empire better.

1) The Qin Empire conquered the region in only 14 years.

Qin Shihuang (259–210 BC) and his military advisors initiated successive campaigns and conquered every other region of the former Zhou Empire in only 9 years from 230 to 221.

By 214, with an army of a million troops, they had also extended their territory northwards and also conquered a large territory in the south including the land of modern Guangxi, Guangdong, and northern Vietnam.

2) The Qin Dynasty had staggering wealth and power.

The First Emperor could force the people, about 30 million people initially, to do his will till their deaths, and he controlled the empire's wealth.

For example, he ordered all the peasant's weapons turned into him, and when they were melted, he made 12 bronze statues that each weighed 120 tons for just one of his 200 palaces.

He forced the 120,000 most powerful and wealthiest families in the empire to move into the capital city of Xianyang (today’s Xi'an).

To build the Qin Great Wall, as many as a million people died.

In 214 BC, to guard the northern border of his empire against the an aggressive tribe called the Xiongnu, the First Emperor ordered General Mengtian to construct a wall that eventually stretched 4,000 kilometers.

Mengtian surveyed the geography, and oversaw the connecting of the walls that were built by the various states, in order to construct the first Great Wall and a number of forts along the border.

The slaves and prisoners suffered under so much under the harsh northen border conditions that it is estimated a million people died to build the firth Great Wall. See The Great Wall of the Qin Dynasty. To unify the empire and facilitate their rule, the First Emperor and his court made drastic cultural changes. Small seal script, a style of calligraphy, was imposed as the standard script in the Qin Dynasty. This script replaced the writing systems used previously by the various states.

He also standardized weights and measures and money.

5) The Qin court attempted to destroy all opposing ideas. The Terracotta Warriors museum in Xi'an.

In an effort to make everyone obey and support the Qin rulers, they tried to destroy all literature in the entire empire except for those books about the history of the State of Qin, medicine, divination, and tree-planting. Severe penalties were imposed on those who didn't turn in their books or talked about the books.

As part of their effort to standardize the culture and thought, they buried 460 leading Confucian scholars alive and tried to eradicate opposing schools of philosophy.

6) One of the Qin Empire's greatest projects was the world's largest grave site. The Terracotta Army, part of the necropolis, is a replica of the army of Qin and were designed to guard the First Emperor in the afterlife.

7) The 8,000 Terracotta Warriors are amazingly lifelike.

They've been called a Wonder of the World although they are only a small portion of the necropolis. They are the best-known remains or ruins of the Qin Empire. The attention and detail that went into their production amazes both archeologists and crowds of visitors. Vault One of the Terracotta Warriors Museum displays about 2,000 warriors with realistic facial features.

To an extent, the statues were meant to look like real soldiers. Some researchers think they are actually portraits of real people. They are faded now, but once they were colorfully and realistically painted. Thousands of weapons, jewelry, and other accoutrements were either robbed or decomposed away, but people are impressed by the quality and quantity of the remaining artifacts.

8) The Qin Empire killed about half the population in the region.

All the Qin wars, repression, and construction projects as well as the final fall brought great misery and death on a massive scale. The Warring States had in total about 40 million people at the end of the Zhou Dynasty period before Qin Shihuang started his big offenses, but at the end of the Qin Empire, there were only 18 million people left in the region.

9) The Qin Empire only endured for 14 years!

For all the vast size of the army and the tight totalitarian control, for all their planning and strategy and mega-construction projects to defend and strengthen themselves, the Qin Dynasty reign ended with the death of the third Emperor of the Qin in 207 BC. The Qin Empire was by far the shortest lasting empire in China's history.

10) The mighty and tyrannical Qin Empire was conquered by a peasant.

Their massive wars of conquest and vast construction projects that killed about 20 million people and their high taxes made the Qin court very unpopular to say the least. The harsh cruelty provoked rebellion all over the empire.

Liu Bang (about 251–195 BC) led an army that captured Xianyang, the Qin capital city, in 206 BC. Then he conquered other territories and defeated rival armies to emerge as the Emperor of the Han Empire in 202 BC.

About 20% of visitors to the Terracotta Army Museum are foreign. We specialize in private, customer-satisfying tours for foreign clientele. If you travel with us, your guide will facilitate the best tour possible.