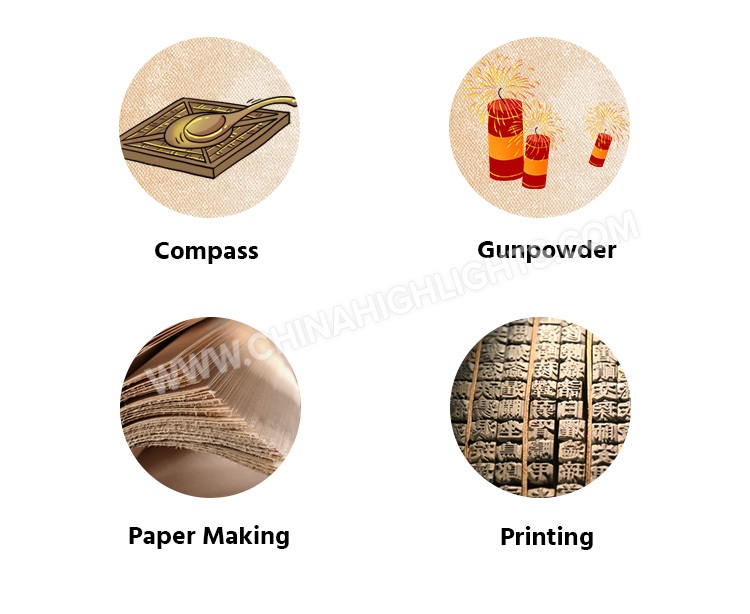 ‘The Four Great Inventions of Ancient China’ refers to paper, gunpowder, printing, and the compass. These four great inventions greatly promoted the development of China’s economy, politics, and culture. When these technologies were introduced to the West through various channels, they substantially revolutionized world civilization.

Before the invention of paper, ancient people from all over the world wrote words on many kinds of natural materials, such as leaves, animal skins, rocks, and earthen plates. Chinese people used bamboo or wooden strips, tortoise shells, or shoulder blades of an ox to record important events. Books written on bamboo strips were very heavy and took up lots of space.

Later, Chinese people invented a kind of paper made of silk, which was much lighter than the strips. The paper was called bo (帛). It was so expensive that it could only be used in the imperial court or governments.

To make a cheaper kind of paper, Cai Lun used old rags, fishing nets, hemp waste, mulberry fibers, and other bast fibers to make a new kind of paper. This kind of paper was much lighter and cheaper than what came before. And it was more suitable for writing on with a Chinese brush.

The technique of making paper spread to nearby Asian countries, such as Japan, Korea, Vietnam, and so on. From the Tang Dynasty (618–907) to the Ming Dynasty (1368–1644), Chinese papermaking techniques spread all over the world, which made a great contribution to the civilization of the world, alongside movable type printing.

The moveable, reusable, clay-type printing technique was invented by Bi Sheng (970–1051) in the Song Dynasty (960–1279) after numerous tests. Before the emergence of this printing technique, manuscripts were all handwritten by scholars, which took lots of time and always included mistakes.

Earlier, Chinese people had invented block printing, which employed engraved words on wooden blocks to print with ink on a board/paper. Block printing used lots of wooden boards and became useless after one usage. Errors on the board couldn’t be changed either.

During the Song Dynasty, Bi Sheng carved individual characters on fine clay pieces, which could be used again after the printing was finished. Bi Sheng’s great innovation gave birth to a revolutionary printing method, so he is called the “father of typography”. His technique then spread to Korea, Japan, Vietnam, and Europe.

Moveable clay type printing could be more easily used in the West due to the small number of English letters (compared to the number of Chinese characters). This printing technique made a great contribution to Western civilization as many more copies of books were printed much faster, leading to a wider sharing and development of education, knowledge, and communication.

Gunpowder was invented by Chinese alchemists during the Tang Dynasty. In medieval China, alchemists were people who tried to make an elixir of immortality as their supreme goal. They inadvertently found that a mixture of sulphur, saltpeter, and charcoal could induce an explosion.

A Used Cannon with Gunpowder

Gunpowder was originally used for making fireworks to celebrate festivals and important events. Later, it was used as an explosive material for cannons, fire-arrows, and other weapons in military use. Gunpower was in great need as there were frequent wars during the Song and Yuan dynasties (960–1368) and mass production was developed.

The technique of making gunpowder spread to Arab countries, and then to European countries from the 12th century to the 13th century.

The history of the compass can be dated back to the Warring States Period (476–221 BC), when Chinse people used a device called si nan to point the direction.

After constant improvement, a round compass with a tiny needle made of magnetized steel were invented during the early Song Dynasty. One end of the tiny needle points to the south and the other points to the north. The compass was then introduced to the Arab world and Europe during the Northern Song era (960–1127).

Before the invention of the compass, people depended on reading the positions of the sun, moon, and pole stars to tell directions on open water or unfamiliar territory. Travelling was difficult in cloudy or bad weather.

After the invention of the round compass, people could easily find a direction when sailing on the vast oceans and traversing new territory, which led to the discovery of the New World as well as the development of sailing ships.

The impact for Europe was particularly great. Using the compass, Europeans thrived at long-distance exploration and acquired more technology from around the world and great wealth. The compass enabled Europeans to discover America, dominate trade in Asia, and travel around the world.

Other important inventions were created, but these are not listed among the most important four. Most notable of these for world benefit and the development of the economies of the various empires were silk and porcelain.

They were valuable trading goods traded along the Silk Road routes, and when the methods for making these products were learned in Europe and the Islamic world, big industries developed in both areas. To learn more about technology transfer along the Silk Road, see What Was Traded on China's Silk Road and Why.

Today China is a mix of ancient culture and modern technologies existing side by side. You can go with us to take a tour to discover the history and culture of China.

Tell us what most interests you about China, and our China experts will try to design a tour for you that fits you well. If the Silk Road interests you, see

Or if the popular cities such as Beijing interest you, we have