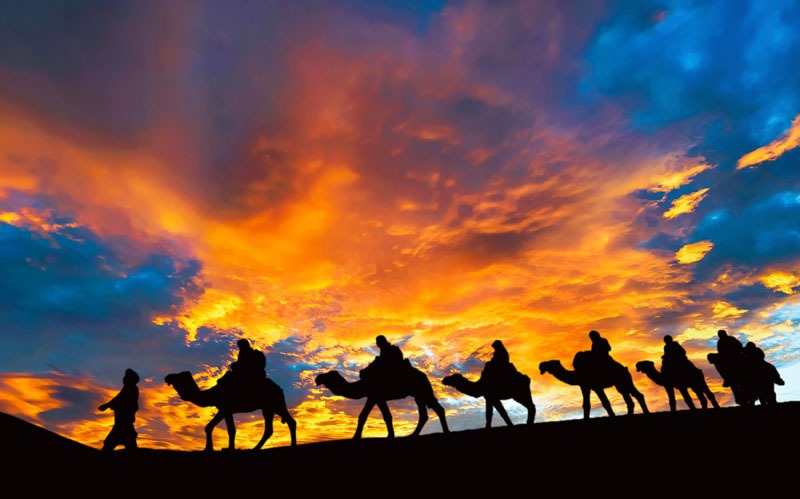 What Was Traded on the Silk Road and Why (10 Items)

As the name implies, silk was the most representative of the goods traded on the Silk Road.

Chinese silk was sold to Central Asia, Iran, Arabia, and the Roman Empire (Europe) along the Silk Road.

Silk was the favorite product along the Silk Road. Chinese silk was regarded as a treasure in ancient Central Asia, West Asia, Africa, and Europe.

The European market had the biggest demand for silk and Chinese silk was highly appreciated in Europe. Colorful silk fabric dazzled the eyes of the people in the vast Roman Empire. The rich and powerful paid huge sums of gold to obtain it.

It is estimated that ancient Rome exported as much as 130 tonnes (143 tons) of gold each year to buy silk.

Silk was the ideal commodity for silk road trade. Because a caravan's carrying capacity was limited, its products needed to be light and of high value. Silk fitted these characteristics exactly.

Porcelain was another product that was prized in the West. The popularity of porcelain even surpassed that of silk in the latter times of Silk Road trade. Silk exports began to decline at the end of the Tang Dynasty (618–907) as silk making techniques spread to central and southern Asia and Europe.

It was during the Han Dynasty era (206 BC – 220 AD) that the first kinds of brightly-colored porcelain were manufactured and sent westwards, and especially during the Tang and Yuan (1279–1368) eras, fine porcelain pieces were produced in massive quantities and exported.

The 17th and 18th centuries were the golden age of the export of Chinese porcelain. About 200,000 pieces were exported annually in the 17th century. In the 18th century, sales peaked at about a million units a year.

Horses were China's most prized import. Horses from central Asia were large and swift — good steads and warhorses. Chinese envoys describe them ‘winged horses’, as they were significantly better than breeds in the empire.

China’s various dynasties always had a need for horses. Local breeds were considered too small, and they wanted better horses to use in battles against nomads and enemy cavalry. This is actually what spurred the Han court to begin regular Silk Road trade in the 2nd century BC.

Woolens from Central Asia and the eastern Mediterranean were sold to China.

Sheep were largely unknown in the eastern empires. Then, woolen clothes, carpets, curtains, blankets, and rugs came to China from Central Asia and the eastern Mediterranean.

These products impressed the Chinese, because they were unfamiliar with the methods of wool processing, carpet manufacture, and weaving. Parthian tapestries and carpets were highly appreciated in the ancient empires.

China received more exotic food than it exported. Tea was the main food export from China. See more on the Tea-Horse Road trade.

Initially, during the Han era, traders brought in grape seeds. Much of Eurasia had cultivated grapevines and made wines from time immemorial, but the Han, separated from other civilizations by seas, extreme deserts, and high mountains, thought it was novel. They were surprised that people made wine from them.

The Arabs dominated the spices and perfumes trade. They traded spices to China and Europe. Although it was not the world’s only producing area, it monopolized the transshipment trade in India and East Africa — two other sources. By the 10th century, the trade in Europe was almost entirely controlled by Arab traders.

China also produced spices, but the variety was very limited due to geographical limitations. Its main spices — cloves and musk — were sold to the West along with silks and porcelain.

Glassware was one of the main commodities imported into China from the West. Glassware was novel. It was considered a luxury good in those days.

First the Romans and then Samarkand (SE Uzbekistan) made glassware that was especially valued due to its high quality and transparency. Ancient/medieval glassware from west Asia has been unearthed in China, Japan, and Korea.

The glorious Silk Road also hosted a dark and tragic slave trade. Slaves were treated as commodities. Many slaves traveled long distances by land and sea to foreign markets far away.

Slaves were traded as goods in all the countries along the Silk Road, including Europe, west Asia, Persia, India, Southeast Asia, and China.

To get slaves across borders, money and animals were paid for a pass. Not only the sellers, but also the local ports, markets, and officials benefited. That's why the slave didn’t stop until the 19th or 20th century in Asia, long after the Silk Road waned in importance.

Apart from material goods, religion and technology were also “traded” along the Silk Road.

In the area of religion and philosophy, the Chinese were net importers. None of the religions and philosophies of China, such as Taoism and Confucianism gained much of a following in Western countries, but the religions of Buddhism and to a lesser extent Islam and Christianity all gained followings in the eastern empires.

Many grottoes along the Silk Road, e.g. the Longmen Grottoes, are a witness to the growth and prevalence of Buddhism along the route.

Papermaking techniques reached Samarkand in the 8th century. By the 13th century, the very important technology for making paper reached Europe through Baghdad and enabled the Renaissance of European science and culture.

In the 5th century, glass making technology reached China, and later it was applied to make colorful cloisonné.

Diseases also traveled along the Silk Road. The Black Death, which broke out in 1347, was a terrible disaster spreading along the trade routes.

Some research suggests that the Black Death was transmitted largely by the Silk Road. Infected rats followed caravans along the Silk Road to the Mediterranean, where they spread north and south to Africa and Europe.

1. What did Europe trade on the Silk Road?

2. What did China trade on the Silk Road?

3. How were goods traded on the Silk Road?

Goods were often traded through bartering. Camels were the means of transport on the overland Silk Road. Merchants traded their goods in intermediate cities, such as Rey (in modern-day Tehran) in Persia (the old name of Iran), Petra in Israel, and Herat in Afghanistan.

From the Tang and Song (960–1279) dynasties, maritime Silk Road trade began to prosper. Ships set off from southern port cities, crossed the Indian Ocean, the Red Sea, and reached east Africa and Europe. Porcelains and spices were the main goods shipped.

4. Where did the Silk Road trade start and end?

Starting from capitals of ancient China like Chang’an (Xi’an) and Luoyang, the Silk Road bifurcated through the five Central Asian countries (the Stans), and continued through Afghanistan, Iran, Iraq, and Turkey, then to Greece and Italy and across the Mediterranean Sea or south through Israel into Africa.

Explore the Silk Road with Us

Today, the Silk Road still tells many stories of ancient times and the exchange of cultures. Take a tour to discover the history and culture of the Silk Road. See our Silk Road tour designs for inspiration (all tours can be customized):

Or contact us to create your very own Silk Road tour based on your group size, time, budget, interests, and other requirements.