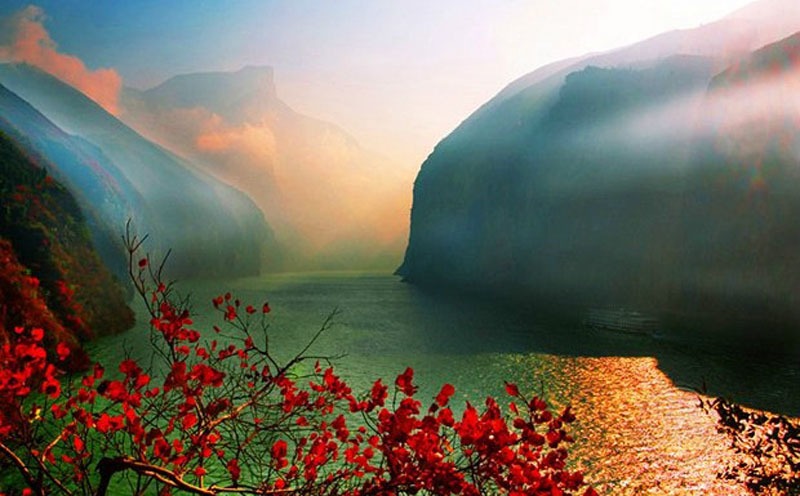 China has a coastline of about 18,500 kilometers (11,500 miles) long, and over 140,000 kilometers (87,000 miles) of navigable inland waterway. Taking a cruise by waterway in China has now become a relaxing and enjoyable tourist experience, rather than mere transportation. The following are some well-known waterways for cruising recommended for you while traveling in China. Contact us for a customized tour

The Yangtze River is the third longest river in the world, and the longest in China. It has the widest variety of outstanding tourist attractions, scenery and culture along its length, all contained within China, and holds several world records. The most famous section and also the cruising section stretches from Chongqing to Yichang, or vice versa. While cruising, visitors can enjoy the breathtaking scenery along the way, visit historical and cultural sites and pass through Three Gorges Dam, the largest hydro-electric power station in the world.

The Grand Canal of China is the world's longest man-made waterway. Its construction began in the end of the 5th century and was extended for several times in subsequent dynasties. The canal has been serving as a significant means of transportation for centuries since ancient times. It facilitated the transport of food and goods from the south to the north and boosted commercial development in the country. The section from Suzhou to Hangzhou is still in active use today, with vendors rowing their boats directly to households and shops in local townships.

The Yellow River or Huang He is the second-longest river in China and the sixth-longest in the world at 5,464 kilometers (3,398 miles) long. It flows through nine provinces of China and it is the river containing the world’s largest volume of sand. The Yellow River is called the "the cradle of Chinese civilization", as its basin is the birthplace of the northern Chinese civilizations and is the most prosperous region in early Chinese history. There are no cruises for visiting the Yellow River, but visitors mostly travel the cities along its area, such as Lanzhou, Luoyang, Jinan and Xi'an.

Li River winds its way for about 437 km (272 miles). The 83-kilometer-long section between Guilin and Yangshuo is the essence and the most beautiful part and one of the highlights of a China holiday. The waterway winds its way between sheer cliffs, with bamboo groves lining along the river banks, and farmers going about their daily routines in the fields. For outdoorsy travelers, hiking along the Li River is a good chance to get closer to nature and local life.

West Lake is considered as one of the best biking routes in China. West Lake is man-made and created after the Chinese love for garden style parks for recreation. West Lake is a place of tranquility where urbanity becomes a silhouette on the northeast horizon and mountains near and far surround it on the other three sides. The occasional pagoda and Chinese-style arched bridge add atmosphere to the tree-lined walkways, verdant islands and hills. To admire the beauty of West Lake, visitors can leisurely bike around the lake, or take a short cruise on the lake.

Pearl River is the most extensive river system in Southern China, mainly in Guangdong Province. It is also called "Canton River" or "Guangdong River". It is the third longest river (2,129 km long) in China. The Guangzhou section of the river is where Guangzhou's most scenic spots are located. The river has a long history and nourishes the civilization of south China. Many famous sights are clustered along the river. The evening cruise on the Pearl River is one of the tourist highlights in Guangzhou.