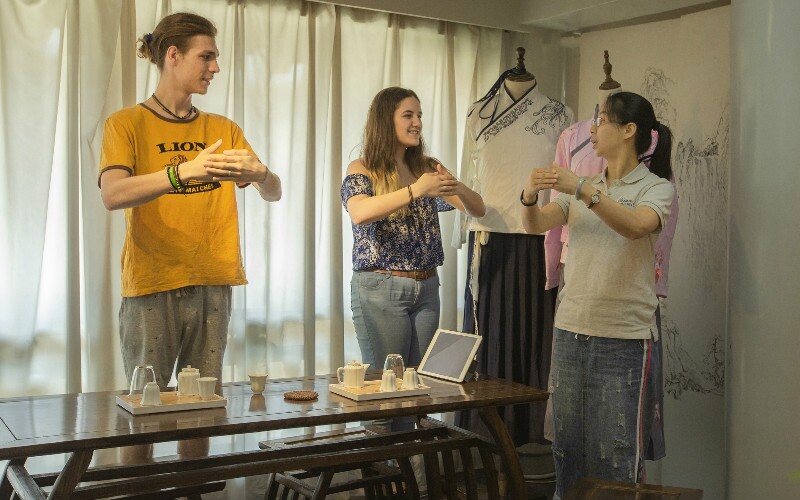 Do and Don'ts in China — A Guide to Chinese Etiquette

As one of the oldest living civilizations on Earth, China has been developing its culture over millennia and during your visit you might notice that Chinese culture isn’t exactly what you’re used to. What might be culturally acceptable in the West might be taboo in China (and vice versa!) so it’s only natural to feel a bit overwhelmed when visiting China for the first time.

To help keep the culture shock to a minimum, we’ve compiled this handy list of cultural do’s and don’ts, as well as a general etiquette guide that’ll help you blend right in when visiting this fascinating country.

Handshakes as greetings in China are as common as they are in the West.

Our guides will show you the proper, Chinese way of using chopsticks

When visiting friends in China, it's common to present your host with a small gift.

Not sure what to gift your new Chinese friends? Our guides on Gifts for Men and Gifts for Women have you covered.

Etiquette in Historic and Religious Areas

For example, around Tibet and Jiuzhaiguo:

If you’re interested in learning more about Chinese temple culture, be sure to check out our guide, How to Visit a Chinese Temple or join us on our popular 7-Day Tibet Discovery Tour by Train where you’ll be surrounded by spectacular scenery while travelling via the world’s highest railway.

In Mosques and Islamic Areas Around the Silk Road:

Thinking of travelling to the Silk Road? Be sure to check out our Silk Road Travel Guide, or if it’s your first time visiting China, our 13-Day Beijing- Xian- Dunhuang- Urumqi- Shanghai Tour incorporates a visit to the Silk Road with other popular Chinese highlights.

Always remember to keep calm and to never overreact

Chinese people are just as proud, if not prouder, of their country as visitors are of theirs. They can understandably become a little irritated when visitors favor with criticisms of China. Would you be happy to hear criticisms of your home country? Chinese people already know that not everything’s perfect, and they also know that they, like other countries, are working hard to deal with issues such as the environment and the population. Discussions regarding politics, state leaders, recent history, and issues pertaining to Taiwan, Xinjiang and Tibet are still seen as sensitive topics, and should be avoided.

Do not overreact when a local asks personal questions. What might be regarded as a personal question in your country could be a perfectly normal, and valid question in China. Don’t act shocked if your new friends start asking you questions regarding your marital status, family, age, job or income – they’re asking such questions in an attempt to seek common ground and start or keep the conversation going. If you don’t feel comfortable answering a question, let the person you’re talking to know. Just as there’s no need to overreact when asked such questions, there’s no need to answer a question that makes you feel uncomfortable.

Keep calm when dealing with government officials and void making situations unnecessarily tense. An angry or upset foreigner sticks out like a sore thumb and draws unnecessary attention. Not only that, but raising your voice or getting angry is considered a loss of face in Asian culture, and China’s no exception. Getting frustrated will help with nothing but creating a losing-face situation for everyone involved, and there’s few things worse than causing someone to lose face among their peers.

Never write in red ink. Red ink is a symbol of protest or criticism, and best saved for teachers correcting students’ homework. Another reason as to why you should never write in red ink, particularly when writing someone’s name, is that red ink is used to mark the names of criminals condemned to death in official records, and to write their names on their tombstones. Need another reason? Red ink is sometimes used to convey bad news – such as somebody passing away or a breakup letter. The best thing you can do is to avoid using red ink all together, the last thing you’d want is to upset your new friends by writing them a thank you letter in red ink!

Punctuality is considered a virtue in China (despite the fact that Chinese people are, on average, 10 minutes late for their engagements!). Being on time is a sign of respect toward others. Chinese people may show up earlier to show their earnestness, but be wary of the situation. Showing up early to a meal you were invited to can be considered impolite, as it may give the impression that you’re hungry and eager to eat. Being on time for your tour or at any other time shows respect for the guide, and for fellow travelers.

Avoid public displays of affection. Even though public displays of affection in China are not as taboo as they used to be, it’s still wise to avoid them. Just like the body contact we mentioned in the “Greetings” section, the person you’re with might not be comfortable with PDAs, or the community you’re in might frown upon such acts. Play it safe and save all affectionate displays

The Potala Palace is a symbol of Tibet, where the do's and don'ts are very different. To plan a trip, see our Tibet Travel Guide.

Getting ready to visit this culturally rich country for the first time? Get in touch with our local experts and they’ll help you create your very own customized trip so that you can enjoy China your way. Our knowledgeable travel advisors and local tour guides will ensure you avoid the above cultural do’s and don’ts, minimizing the culture shock and maximizing your enjoyment.

If you’re still unsure of what to do, be sure to check out a few of our popular tours for inspiration: