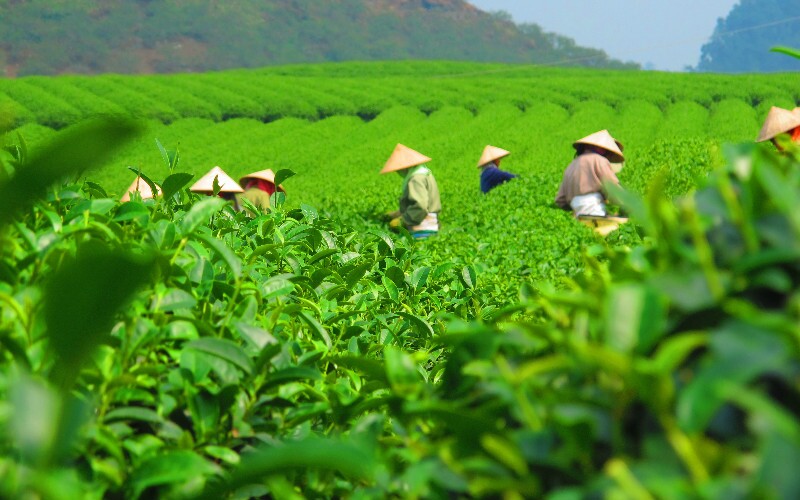 China's top tea culture cities fall into two categories: those that have famous tea-growing areas nearby, and those which have a history and culture of tea-drinking (some are both).

Tea drinking is popular all over China and different areas have their favorite types, but the top seven cities listed here represent the cream of China's favorite tea production areas.

The Chinese Tea Museum in Hangzhou has many world class exhibits.

Many sources agree that China's top-rated tea is West Lake Dragon Well Tea (Xi Hu Longjing, 西湖龙井), grown on the hills around West Lake, southwest of Hangzhou City. With its history as an imperial capital and also as a place of vacation for Beijing's emperors, China's best tea has been enjoyed in style in Hangzhou for well over 1,000 years.

Hangzhou Tea Museum, located among the tea plantations, is China's only museum dedicated to the history of Chinese tea. All our Hangzhou tours take in Meijiawu Tea Plantation, which has hosted many foreign VIPs. Try the 1-Day Dragon Well Tea Culture and West Lake Tour.

A popular choice for China's second favorite imperial tea is Suzhou's Green Spiral Tea (Dongting Bi Luo Chun, 洞庭碧螺春). Like Hangzhou, Suzhou was an imperial retreat for Beijing's elite. Suzhou's ornate gardens were doubtless the setting for many a classy "cuppa" over the centuries.

You too can drink the tea of emperors and enjoy the gardens that emperors enjoyed on a Suzhou tour.

Huangshan is one of the famous tea culture cities in China. The mythical Yellow Emperor, who, it is said, once lived in Huangshan and who gave his name to the enchantingly-scenic Yellow Mountains, was traditionally a friend of Emperor Shennong (the 'Divine Farmer'). Shennong is said to have discovered tea when some tea leaves fell into a pot of water his servant was boiling for drinking.

Chengdu is also a popular place for drinking tea. The particularly relaxed atmosphere of this city is demonstrated by residents who spend large periods of time in the tea gardens of parks, sipping tea while playing chess, mahjong or cards, reading the paper, or just chatting with friends.

Ya'an, on the Sichuan end of the Ancient Tea Horse Road, is only 120 kilometers southwest of Chengdu. It has a history of tea production dating back 2,000 years. From Ya'an, bricks of dark tea were carried by horseback to Tibet and further afield. Take a tour of Chengdu and enjoy its tea culture.

Xishuangbanna is one of the Yunnan endpoints of the Ancient Tea Horse Road and is still a major tea-growing area. From there, pressed tea was carried by horseback to Tibet, India, and Nepal. The tropical forested hills of Xishuangbanna are where the Dai people produce some of the best Pu’er tea, which is pressed into a variety of wheels, bricks, etc.

Pu’er, the next major stop after Xishuangbanna, was where tea was traded and it gave its name to this famous type of dark pressed tea, although most prefectures in Yunnan, including Xishuangbanna, produce Pu’er tea. Pu’er tea should be tried as it is different to the generally delicate flavors of Chinese tea. It has a rustic woody taste, and is soothing and reminiscent of a minority culture.

Wuhan is a city with an ancient history. It occupies a uniquely central position for transport with the Yangtzeflowing west–east and land transport bridging the Yangtze River from north–south. See our Wuhan tours, some of which include a Yangtze cruise.

Wuhan is famous more as a place for drinking tea, with its many tea houses, than for growing tea, although there is a famous tea-growing area 200 kilometers (130 miles) southwest in Junshan, Hunan Province. Junshan Silver Needle (Junshan Yin Zhen 君山银针) has been ranked among China's top ten teas in some versions of the imperial list. Yellow was the imperial color and Silver Needle is a yellow tea.

Iron Goddess tea (Anxi Tie Guanyin 安溪铁观音) probably holds the bronze medal position among China's teas. It is an oolong (Wulong) tea with a fresh and mellow taste — a favorite for summer drinking.

Anxi, where Iron Goddess is grown, is about 40 kilometers (25 miles) northwest of Quanzhou City, in Quanzhou Prefecture. Quanzhou is a large city (more than 6 million inhabitants) on the Fujian coast. Nearby Xiamen is the most famous tourist city in Fujian.

Jasmine tea, Beijing's favorite, uses jasmine flowers mixed with green tea. The best jasmine tea is produced in Fujian Province. Customize a visit to Quanzhou, known as the "World Religion Museum" and the start of the Maritime Silk Road, to see Anxi and sample China’s favorite summer tea in its natural setting.

Located in the east of Guangdong Province, Chaoshan (or Teochew) is a special linguistic and cultural region. It consists of the cities Jieyang, Chaozhou, and Shantou and it used be the ancestral homeland of many Thais, Singaporeans, and Malaysians of Chinese descent.

Kung fu tea, the renowned tea ceremony, originated in the Chaoshan area. Drinking tea is an essential part of Teochew people’s daily lives and they serve it as an important etiquette.

Jasmine tea originated in Fujian, but it is the most popular flowering tea in Beijing’s tea houses.

Cold (or warm) milky tea with gelatinous "pearls" is a favorite in Hong Kongand Guangdong.

Guilin has its own tea plantation and tea institute near Yao Mountain. Guilin's minorities, particularly the Yao, enjoy oil tea.

Experience tea culture for yourself.

One of the attractions of going to tea-growing areas is being able to get out in the scenic mountainous areas where the tea is grown, and to see for yourself how the tea is produced. You will then most likely have the chance to drink the local tea, with a guide explaining the tea ceremony, how best to brew and drink the tea, and then a chance to buy some. Don't forget to bargain.

China Highlights can help you get to these less-accessible tea-growing areas with comfortable private transport, and we can provide a knowledgeable guide to help you with language issues and understanding of tea culture.

To see any or all of all of these top tea cities, and anywhere else you’d love to visit in China, contact us for a tailor-made China tour.