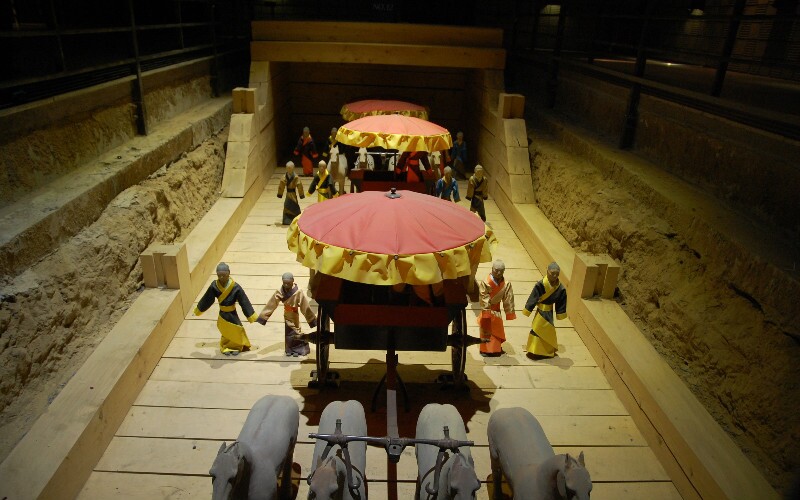 Maoling Mausoleum is the tomb for Emperor Wu of the Western Han Dynasty (206 BC – 24 AD), Liu Che (156 BC – 87 BC). It is the largest tomb which is called "the Chinese Pyramid" in the Han Dynasty (202 BC – 220 AD) with the longest construction time and the richest funeral objects.

Among those 11 tombs in the Western Han Dynasty, Maoling Mausoleum must be the largest one. Even in the Chinese history, only the tomb of the Emperor Qin (259 BC – 210 BC) in Lishan Mountain can rival it. The cemetery is a quite square with each side is 420 meters, surrounded by walls which are 431 meters (1,414 ft) long from east to west, and 415 meters (1,362 ft) wide from south to north). There is a gate in the center of each wall, and the relics of the east, west and north gates can be found in well preserved condition. The relic of the tomb looks like a pyramid without the pinnacle. It is 46.5 meters (153 ft) high and the length side of the foundation is 240 meters (787 ft) long. The whole mausoleum features lofty and majesty.

According to the historical records, it took 53 years to construct the mausoleum, and the construction of it cost one third of the taxes at that time. It is said that the burial objects are too many to be filled in the tomb. Besides the tomb of Emperor Wu of the Western Han Dynasty, there are many subordinate tombs including tombs for Li Furen (imperial concubine of Emperor Wu), Wei Qing and Huo Qubing (two famous generals in Emperor Wu’s time). Up to now, we still can image the original picture of the grand mausoleum by visiting the ruins.

About 1 kilometer from the mausoleum, situates Maoling Museum which is famous for the Mao Mausoleum and Huo Qubing tomb nearby as well as the large group of stone inscriptions. More than 4,100 cultural objects are exhibited including 14 national historical relics. Besides retracing the prosperous Han Dynasty with these cultural objects, visitors also can enjoy some entertainments like the performance of chime and going sightseeing by riding a donkey and so on.