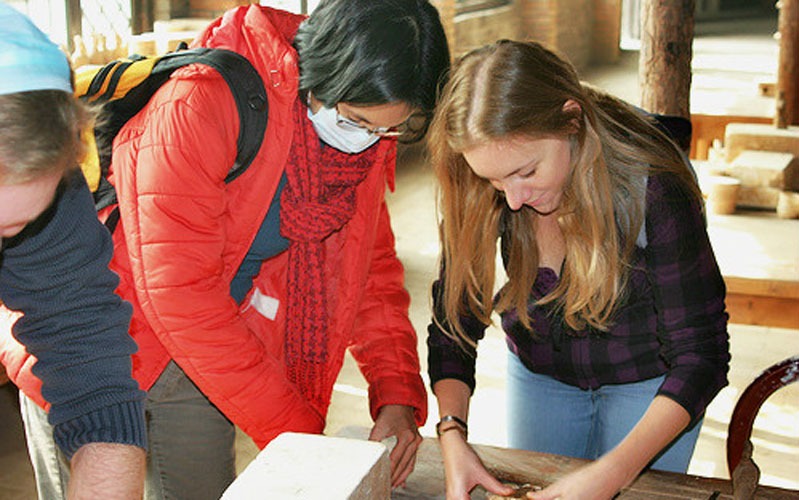 Having served as the capital city of 13 dynasties spreading intermittently across a 1,100-year period from 221 BC, Xi’an is characterized by and is proud of its ancient heritage.

Follow us to start a journey to every corner of the city and uncovered the best things to see and do in Xi’an.

1. Pay a Visit to the Terracotta Warriors

Visit the Terracotta Army and learn how these life-size warriors were made. Pay a visit to a local cave dwelling to learn traditional techniques used 2,000 years ago and try making a mini warrior yourself.

2. Cycle or Stroll along the Xi’an Ancient City Wall

Xi’an Ancient City Wall is the largest and best-preserved ancient city wall in China. The wall was erected in the 14th century Ming Dynasty, under the regime of Emperor Zhu Yuanzhang. It witnessed the historical vicissitudes of Xi'an and is considered a landmark dividing the city into the inner part and the outer part.

Riding a bike or taking a stroll along the city wall is a good way to explore the history behind it. You’ll be surprised to find that the base of the wall was made of earth, quick lime, and glutinous rice extract, tamped together. It made the wall extremely strong and firm. Later, the wall was totally enclosed with bricks.

From the top, you can enjoy views of the different areas of the city, including areas with time-honored brand-name shops to busy bar streets.

Xi'an, a place of great significance in Chinese history, is well-endowed with historical sites and relics. Now most of these relics, once scattered around the region, have found their way to Shaanxi Provincial Museum.

As one of the top 10 museums in China, Shaanxi Provincial Museum has collections ranging from the times of ape men to the Qing Dynasty before the Opium War in 1839, and from large bronze wares to exquisite golden carvings.

Big Wild Goose Pagoda is one of the most famous Buddhist pagodas in China. It houses the Buddhist materials brought back by Xuanzang from his epic journey to India.

Its storeyed architectural style is the highlight. It was built with layers of bricks without any cement. The bracket style used in traditional Chinese architecture was also used in the construction of the pagoda. The seams between each layer of bricks and the "prisms" on each side of the pagoda are clearly visible. The grand body of the pagoda with its solemn appearance, simple style and high structure, is indeed a good example of Chinese traditional architecture.

5. Have an Interesting Hanfu Costume Experience

The Hanfu ('Han clothing' - the majority of Chinese are of Han ethnicity) is the oldest of China's traditional clothes. Until the Han Dynasty, the Hanfu was adopted and vigorously promoted by the ruling class. It then became the national clothing of the Han ethnic people.

As the major capital city in Han Dynasty, Xi’an is a good place to learn about the Hanfu. You can try on the costume to get a unique taste of the ancient culture.

Muslim Street is a paved road with blue-gray flagstones and shaded by trees, along which the archaized stores of the Ming (1368-1644) and the Qing (1644-1911) dynasties are in line, and they're all operated by the Hui ethnic people. The street is lined up with various restaurants and food stalls, some of which specialize in selling cakes, others in dried fruit or breads, and hordes of stalls selling barbequed meats on skewers.

You can try both traditional dishes and special snacks, such as roujiamo – marinated beef or lamb stuffed inside a freshly baked bun – and cold noodles, which can be made from rice or from flour.

Drum & Bell Towers are both closet to Muslim Street. The Bell Tower sits in the center of Xi’an. A 6-meter (20 feet) tall arched gate opens in the west, east, north and south sides respectively, through which all traffic passes. Facing the Bell Tower across Zhonggulou Square, the Drum Tower is the largest one of its kind in China, decorated with 1,996 studs and four bronze rings and has 28 drums of various sizes.

When nights fall, they are resplendent and magnificent when colored lights start to shine in the night.

Mount Hua (Huashan) is one of the five sacred Taoist mountains in China. It will take 1½ hours’ drive to get there from Xi’an. A variety of temples and other religious structures nestle on its ridges and peaks.

Mount Hua is well-known for its sheer cliffs and plunging ravines. Because of this, it is known as "the most precipitous mountain under heaven" and attracts many hikers for the challenge of climbing it. You can also take a round-trip cable car ride to get up and down the mountain and can enjoy the scenery along the way.

Hanyang Tomb is Emperor Jingdi's mausoleum. His son, Wudi, established the Silk Road in 138 BC. Covering a total area of about 10 square kilometers or 4 square miles, it is like a little city or a little kingdom complete with miniature statues of animals, servants and soldiers positioned in various places like a make-believe miniature kingdom.

You'll see lots of small clay warriors displayed under a glass walkway. Different to the serious faces of the warriors in the Terracotta Army, these warriors have mysterious smiles on their faces. The walkway provides a wonderful insight into how they were built.

10. Have a Dumpling Banquet

Dumplings are a staple food of Xi'an and North China. Xi'an dumpling banquet is one of the most famous dishes in the city. Dumplings will be made in different shapes and colors with different ingredients.

Visit a local family and learn how to make dumplings. Have a dumpling banquet with the family and learn why Chinese people like eating dumplings. The host will demonstrate various dumplings, share some basic skills of dumpling making, and you will enjoy the fruits of your labor.

Tour Xi’an with Us

Let us tailor-make your Xi’an tour according to your interests and needs. We will not simply lead you to the attractions and tell you about the city’s history, which you can Google. In our tours, you will experience the culture that comes alive in a vivid way.

The Essence of Xi'an 3-day It includes 7 must-see attractions of Xi'an and 3 unique experiences, all in 3 days. View more