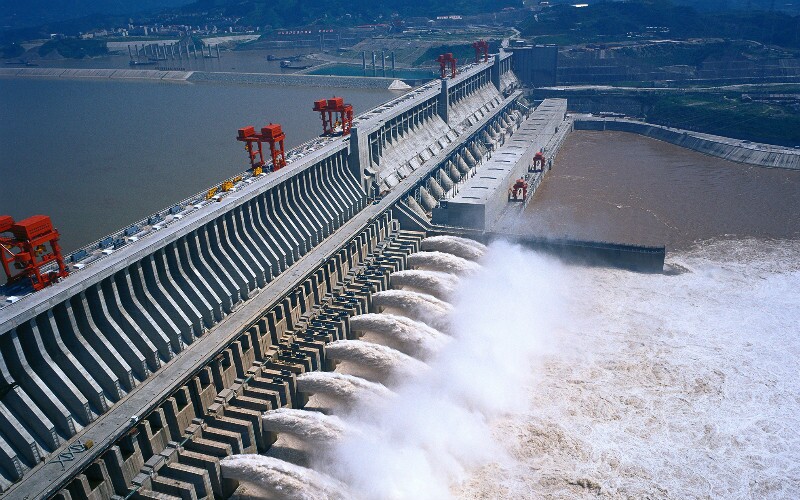 The section of the Yangtze between Chongqing and Yichang (The Three Gorges) is the most classic Yangtze cruise route, which has abundant historical sites as well as beautiful natural scenery. Besides cruising on the river, you should not miss the shore excursions that interest you. We have listed the most popular ones below:

These nine shore excursions (covered in Chongqing to Yichang order) will provide you chances to experience the heart of China's longest river more fully, enjoying its incredible natural beauty, experiencing its splendid culture, and relishing its authentic local flavor.

The location of shore excursions between Chongqing and Yichang

Fengdu (a.k.a. Jade Emperor Scenic Area) is a very popular shore excursion site on Yangtze River cruises. Colloquially known as the ‘Ghost City’, many of its historical sites are linked with China’s ghost culture, which attracts a large number of tourists.

In this ancient town are 75 Buddhist and Taoist temples that were built during the Tang Dynasty (618–907) and that house many demon and god statues. In Chinese legends, Fengdu is where the devil lives, and it is also a place for punishing the evil and rewarding the good. Check out more about Fengdu.

Fengdu is built in a mountainous area, which may not be conducive for seniors or other travelers who don’t want to climb lots of steps. It is suggested that you choose/skip Fengdu according to your physical condition. Even included excursions can be skipped by staying onboard the cruise ship. See more at the page foot.

Shibaozhai in the light of the setting sun

Shibaozhai (‘Stone Treasure Stronghold’) is a 12-story wooden pagoda in Zhong County on the south bank of the Yangtze River. It is a magnificent structure built against the side of a sheer rectangular cliff. Its architectural style and surroundings make it look like “a heavenly building”. First built during the Qing Dynasty in 1750, Shibaozhai’s every floor contains interesting artifacts. The pagoda has been named “the Pearl of the Yangtze”. See more on Shibaozhai.

Due to the steep stairs, travelers who would experience physical difficulties are suggested not to climb to the top of the pagoda.

Fengjie is an ancient and cultural county with a history of about 2,400 years located not far east of Chongqing. White Emperor City lies in the eastern part of Fengjie Ancient Town. Fengjie is also known as ‘Poem City’, as many prestigious poets such as Wang Wei, Li Bai, Du Fu, Su Shi, and Su Zhe stayed there and wrote many classic poems that reflect the beauty of this county on the Yangtze River. This mini city rests on top of Baidi Hill and is filled with scattered temples and ancient gateways. See more on Fengjie.

The main attractions are located on the top of a hill, where a significant amount of walking and climbing steps is needed. Please wear a pair of comfortable shoes.

The boat on Shennü Stream

Shennü (‘Goddess’) Stream is on the south bank of the Yangtze River in Guandu District of Wushan County, Chongqing.  It is also known as "Beauty Stream". With an overall length of 15 km (10 miles), because of the turbulent water and narrow valleys, Shennü Stream has nearly 10 km (6 miles) of primordial gorges untraversed by modern development. Beautiful landscapes and traditional dwellings are hidden in the valley.

Since the stream is narrow, cruise ships can't navigate it. Travelers need to transfer to a small wooden boat to tour Shennü Stream.

Shennong Stream, also called Yandu River, is the first tributary that feeds the Yangtze River after it comes out of Wu Gorge and flows into Xiling Gorge at Wang Zhaojun's birthplace, Zigui County Town. It is known as the ‘Jade Waterway’ of the Three Gorges.

A shore excursion to Shennong Stream would give you the opportunity to see verdant peaks, limpid water, and rare virgin vegetation near the water's edge. See more on Shennong Stream.

The Lesser Three Gorges are three valleys of the Daning River in Wushan County. They are called Longmen (Dragon Gate) Gorge, Bawu (Misty) Gorge, and Dicui (Emerald) Gorge. They stretch for 25 kilometers (16 miles) in the lower reaches of the Daning River.

The mist–wreathed mountains along the Daning River are covered with lush green flourishing vegetation. Often troops of monkeys appear at the riverbank and on the trees of the mountains. Besides the natural beauty, there are many historical sites along the Lesser Three Gorges, among which the most notable ones are the Hanging Coffins and a plank road built on the face of a cliff. See more on The Lesser Three Gorges.

Especially in the rainy season (July and August), please take your umbrella when visiting as it often rains there.

7. Tribes of the Three Gorges

The fisherman is fishing

Tribes of the Three Gorges is located in the hinterland of Xiling Gorge, between the Three Gorges Dam and Gezhouba Dam. This scenic area consists of the three attractions: Village on the Water, the Brookside Tribe, and the Mountaintop Tribe.

In this mysterious, idyllic land with abundant Ba Culture and Chu Culture, you can enjoy the original natural scenery of the Three Gorges through a combination of boat tours and walking. In the villages, there are colorful folk performances every day. Travelers can participate in them to feel the traditional local culture more deeply.

Climbing of steps is needed for the Mountaintop Tribe visit. You could choose to skip that part according to your physical condition.

The legend of Guan Yu is the main theme of the performance. It revolves around the spirit of loyalty and reenacts some of the major events of the Three Kingdoms Period. With amazing light, sound, and electric effects, the show’s historical scenes are vividly portrayed in front of you.

This show starts at about 7pm from November to April and about 8pm from May to October and lasts about 70 minutes.

The Flood discharge scene at The Three Gorges Dam

The Three Gorges Dam Project was completed in 2009. Situated in Sandouping County in Yichang Prefecture, Hubei Province, the Three Gorges Dam is the largest hydropower station in the world. It is 185 meters (607 ft) tall. See the gem of the nation with your own eyes and immerse yourself in the magnificence and awesomeness of the architecture. See more on The Three Gorges Dam.

The Three Gorges Dam Ship Lift is the largest and most sophisticated ship lift in the world. Travelers can choose to pay an additional charge (CN¥290/person) to tour it (an optional experience on the included Dam tour).

The cruise ship stop in the Tribes of the Three Gorges

Normally one shore excursion is arranged per day. But different cruises may have different itineraries. You can check our ship information for each ship’s cruise route and excursions. The scheduled shore excursions are included in your cruise fees.

Travelers will be given an itinerary of all scheduled shore excursions when boarding the ship. Excursion information will also be broadcasted 30 minutes before the shore excursion. Then passengers are requested to assemble in the lobby if joining the excursion.

There will be signboards with room numbers at the assembly point. Travelers will be divided into several groups (around 20–30 people in a group) according to their room numbers. Each group will be accompanied by a professional bilingual guide!

You could stay onboard the cruise ship if you do not want to join an excursion, but the excursion cost is not refundable.

The whole participation procedure for optional excursions is almost the same as for the scheduled (pre-included) excursions: check the schedule info, listen for broadcasts, and assemble on time in your room number group in the lobby.

If you are not going to join these excursions, you must stay onboard the ship, where you can enjoy a wide range of onboard activities and lectures (which you may also need to sign up for at check-in or book in advance).

To ensure your personal safety, you are not allowed to leave the ship during the cruise on your own (without guide accompaniment) or separate from your group during the excursion times (without prior arrangement with the guide).

If you leave the ship on your own or arrive late for the ship’s departure due to separating from your group, you may miss the rest of your cruise and there will be no compensation.

Thanks to the increasingly convenient transportation infrastructure in China, no matter whether you join an upstream or downstream cruise, it is easy to transfer to other popular tourist cities from Chongqing or Yichang, such as Beijing, Shanghai, Chengdu, Guilin, and Zhangjiajie.

Here are some recommended Yangtze cruise tours for 2021:

Our tours can be tailor-made according to your group size, travel time, interests, budget, and other requirements, please contact us for a bespoke tour.