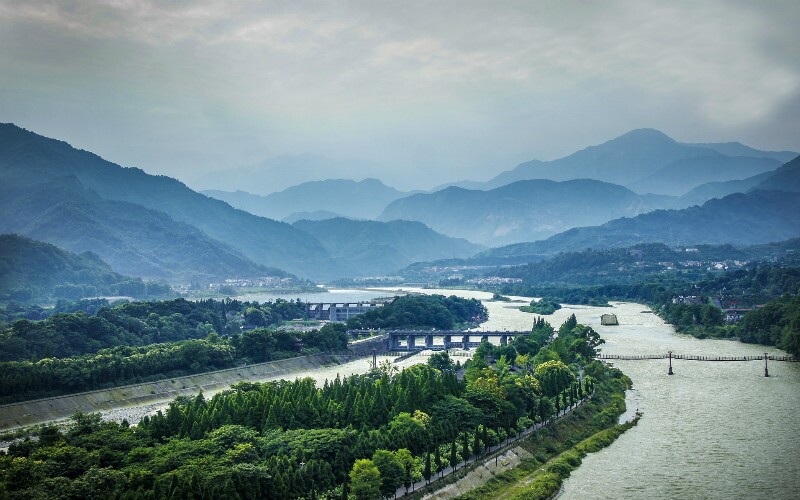 Chengdu (成都) literally means 'become a capital'. For over 2,200 years, it has been an important administrative and economic center, even serving as the capital of several short-lived independent regimes. Discover the highlights of Chengdu's history through six of the people who have shaped the character of this city, and in turn the nation of China.

Chengdu is the capital of Sichuan province and the sixth largest city in China. It is also a leader in finance, culture, communications, and transportation. Archeological discoveries show that the Chengdu region was inhabited over four thousand years ago, and was the center of the ancient Shu culture between 1,600-256 BC. The State of Qin conquered the Shu Kingdom around 316 BC and founded Chengdu at its present site.

Dujiangyan: The Dujiangyan Irrigation System revolutionized the Chengdu valley by transforming it from a land devastated by regular flooding to the breadbasket of China.

Li Bing was a state administrator of the Qin State during the 3rd century BC, and had an important role in making Chengdu and Sichuan province what it is today. At the time, the region was plagued by flooding. Chengdu is located in a basin, and the rivers that flowed down into it would destroy people’s livelihoods - every single year.

Li Bing had compassion on the people, and wanted to do something to change the situation. His solution left a mark on engineering history! From 221-207 BC, Li Bing and his son redirected the waters into a massive system that irrigated more than 5,300 square kilometers (more than 2,000 square miles) and turned this region into the “breadbasket of China”.

In addition to turning the region into an agricultural powerhouse, the irrigation system was also designed to provide a way for supplies to reach the military forces stationed in Chengdu. The national strength of the State of Qin rapidly increased, and by 225 BC the whole of China was unified under Qin, China’s first centralized imperial dynasty.

When Li Bing started on the project, there were no known tools for moving the many rocks and boulders into place. So he crafted a system of fire and icy water to break rocks into smaller pieces that could be moved to other places. The irrigation channels were cut at different levels to give different flow distribution during flood times versus times of low water levels.

Because, the native animist people of Shu believed that the river Min was a deity, Li Bing also had to find a creative way to vanquish the the river god! As the story goes, he first set up a temple to honor the Min deity, and then offered his two daughters to Min as brides. Li Bing arranged a large nuptial banquet. At the banquet, he offered the deity a glass of wine, but the deity did not drink. Li Bing drew his sword and ran off, deeply offended. At the same time, he released two bulls to fight each other along the riverside. One bull represented him; the other the river god. Li bing returned, sweating as though from battle, and called for assistance in killing the river god bull. The deity was subdued.

Education: Wen Weng and the First Public School (c. 143 BC)

Shishi School: Founded by Wen Weng, Shishi may have been the first public school in the world.

About 100 years later another Chinese hero stepped up to leave his mark on history, this time in the field of education. Wen Weng was a Han Dynasty governor who established Shishi School between 143-142 BC-making it possibly the first public school in the world.

The name “Shishi” (石室) means stone chamber, since the original school was made of stone. The school has been destroyed, rebuilt, renamed, and repurposed over the years, becoming a middle school in the early 1900s. Despite these changes, it has almost continuously served as a place of education since its founding! It is said that this marked Chengdu’s entrance into civilization, and almost immediately had an impact on social demeanor. In mid-1948, Shishi was held up as a model for secondary schools nationwide. Today it ranks among the top 100 schools in China, and admission is highly selective.

There has been a bridge at this location since the days of Li Bing. The current name, Wanli, was given during the time of prime ministry Zhuge Liang over 1,700 years ago. It is also commonly called "Nanmen Qiao", or South Gate Bridge.

More than 400 years after Li Bing, Zhuge Liang (181-243 AD) rose to power as the prime minister of the Shu Country. If you want to stand where he once stood, visit the Wanli Bridge. Originally built by Yi Bing, the bridge was already important north-south channel in Zhuge Liang’s day.

He hosted a farewell dinner at there for an important official named Fei Yi who was heading out for a visit to the East Wu Country. Fei Yi said, “The long way ahead starts from this bridge!” Since then it has been called Wanli, or 10,000 “li” (5,000 km or roughly 3,300 miles). The bridge itself has been replaced many times, but its story continues on.

Zhuge Liang is famous for more than his role in naming the Wanli Bridge. Zhuge Liang is credited with inventing the landmine, optimizing the repeating crossbow, and inventing a type of sky lantern used for signalling. He is also credited for inventing the mantou, or steamed bun, as a substitute offering in the place of human heads for appeasing the river god of a dangerous river. The bun was made to look like a head, and stuffed with meat! It has since become a popular food, particularly in the north of China.

Du Fu left home at 20 and later became a court official at the Tang Dynasty capital of Chang'an (near Xi'an), when China was flourishing.

Du Fu's civil service duties did not last long however, and he was captured by rebels and forced to flee the city and take refuge in Chengdu. It was in Chengdu, in his small and simple hut, where Du Fu was inspired to write more than 1,000 poems about the hard realities of war, dying people living next to rich rulers, and primitive rural life, which are regarded today as masterpieces of realist poetry today.

You can visit Du Fu Thatched Cottage Park to enjoy some tranquility and appreciate Du Fu's contribution to Chinese literature and Chengdu.

The Chengdu wall: There are only a few parts of the Chengdu wall remaining, since they were deemed as “obstructive” and taken down in the 1960s. This is a portion of the old east wall. The east gate Crazy Zhang used to start the scholar parade was somewhere near here.

Fast forward to 1644. Zhang Xianzhong was a warlord at the time who had been plundering North China using hit-and-run tactics. He saw that the Ming Dynasty was losing power, and advanced on Sichuan province with about 100,000 men and made himself emperor of his own Daxi Kingdom (“Great Western Kingdom").

Even though his reign lasted only three years, it was a horrible three years that severely depopulated the city. As one story goes, on one occasion he gathered together all the scholars to “honor” them with a parade through the city. They started at the east gate, walked through the city, and went out through the west gate. There Zhang Xianzhong slaughtered them all.

Whether this story is true or not, there are many similar stories about his reign. Chengdu became like a ghost town, with tigers running through the city. To make matters worse, the environment after Zhang was removed to power was unstable, giving rise to invaders, bandits, warlords, famine and diseases which caused further devastation. The end result was that during Zhang’s reign and the subsequent years, as much as half of the Sichuan population was slaughtered, and a further number fled the province. A large resettlement program had to be set up in the years to follow.

Clock tower, Sichuan University, Huaxi Campus: This clock tower, along with some of the original offices, a library, and a museum remain today from the West China Union University days. The clock tower was the tallest edifice in Chengdu at the time.

The first European arrived in Chengdu about in 1642, just two years before Crazy Zhang installed himself as emperor. His name was Lodovico Buglio (1606-1682), and he was an Italian Jesuit mathematician, theologian, author, and Chinese scholar. Crazy Zhang conscripted him into his government, forcing him to serve as a court astrologer during the full three years of his reign. When the Qing emperor deposed Zhang, Buglio was sent to Beijing where he spent four in prison before being released to continue his work.

In the late 1800s and early 1900s, more “foreigners” began to come to the city. Some were Canadian, some American, and some British-but they had a common vision to share the love of Jesus through service in the fields of medicine and education. Among other accomplishments, they set up the Red Cross Hospital in 1892, which is now the Chengdu Second People’s Hospital; the West China University of Medical Sciences in 1914, which trained both men and women doctors; the West China Union University in 1914, which later became a part of Sichuan University; and influenced the anti foot-binding movement in Sichuan. The West China University of Medical Sciences also merged with Sichuan University, and remains a key medical training center in China. Sichuan University continues in academic excellence to this day, ranking number twelve or thirteen in China, and somewhere around 800 globally (rank varies across different ranking agencies).

One of many culture markers in Chengdu.

Here are a few other fun historical facts about Chengdu:

Chengdu is a city marked by compassion, innovation, creative solutions, and influence. The streets are rich with history, available to those who take the time to stop and read the various brown culture signs scattered across it. Check out the Chengdu Travel Guide to learn more about what to do in Chengdu.

Tour in the Steps of Chengdu's History

If you want to join your footsteps to millennia of men and women walking these streets, consider the following popular tours for inspiration:

Travel with us!
Create my trip