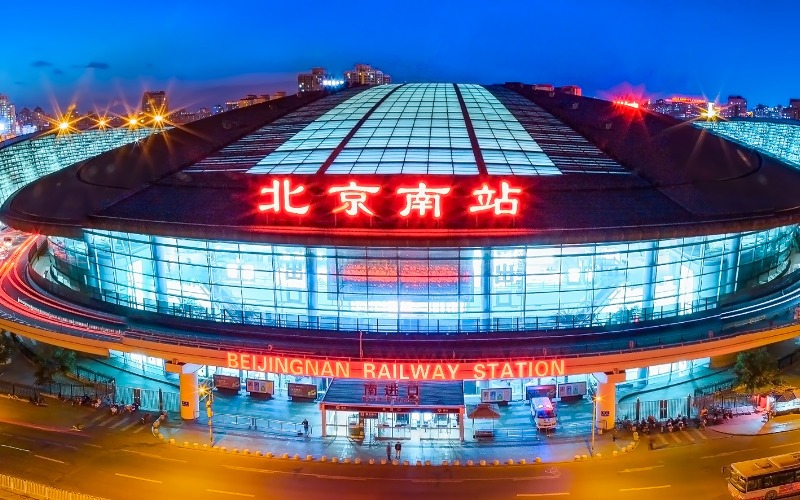 Beijing South train station is Beijing's main bullet train station for lines going east, south and northeast. It is one of the biggest in Asia, but not as big as Beijing West that handles lines that go west and southwest.

It is a metro hub station for lines 4 and 14, and its close proximity (about 4 miles, 7 km) to the Forbidden City and government offices makes it useful for transport of tourists and people doing business.

Lines and trains: It is a good choice for going to Shanghai (both bullet and regular), Tianjin, and other points east and southwards: Nanjing, Fuzhou, Tangshan, Qingdao, Hangzhou, Xuzhou, etc.

Travel time: It only takes about 5 hours traveling from Beijing to Shanghai, Qingdao and Suzhou, and about 6 hours to Hangzhou by G trains.

See the popular bullet train travel routes from Beijing South Railway Station for some ideas for planning trips in China:

Luggage portage: Ask the help and information desk staff at the east entrance if you need help getting your luggage on board or for other help.

Since there are several train/bus stations in Beijing, be clear about which station you want when asking directions or taking a cab.

The subway is cheap and convenient, but a taxi may be preferable if you have a lot to carry. For specifics on taxi fares etc., see Beijing Taxis. Buses are not recommended if you are unfamiliar with Chinese and the city.

Location map of Beijing South and other Beijing stations. Click to enlarge...

Lines 4 and 14 meet at the Beijing South Station. Line 4 connects with Xidan (one of the most popular shopping centers in Beijing), Xizhimen (the main subway hub, where you can change to Line 2 or Line 13), and many famous attractions and transport hubs in Beijing.

Beijing Capital International Airport (北京首都机场) can be reached by metro in just over an hour:

Beijing Daxing International Airport (北京大兴机场) can be reached by metro in just over an hour:

To the Forbidden City:

The Forbidden City  marks the center of Beijing, and is not far from Beijing South (about 30 minutes):

To the Great Wall:

The Great Wall at Badaling is about 60 km from central Beijing.

Badaling's Great Wall section is one of the top historical sites in China. Our Badaling and Ming Tombs day tour provides private transport and you can modify the itinerary to go to other places too. The journey by public transport may take about 3 hours if you manage the time and transport well.