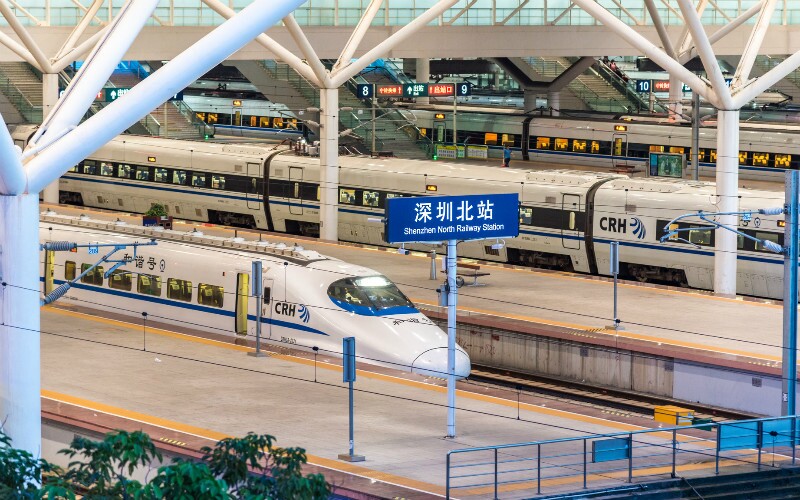 Shenzhen Railway Station is at the busy Luohu Border Crossing with Hong Kong.

For tourists and travelers, the Hong Kong high-speed train that opened in 2018 makes going between Hong Kong and Shenzhen much quicker and more convenient than previously. See these pages for specific information about transportation between these cities:

Shenzhen Bao'an International Airport (深圳宝安国际机场) is a medium-sized international airport. Generally it is easier to enter China (and get to Shenzhen) via Guangzhou or Hong Kong. There is poor America coverage: 1 flight each direct to Seattle and Vancouver, but slightly better coverage for Europe and Australasia... There are about 110 domestic services, but only 14 international services that connect Shenzhen to over 100 domestic and international cities and regions.

Although it is 32 kilometers (about 20 miles) from the downtown area, transportation to Shenzhen Bao'an International Airport is very convenient. Airport shuttle buses depart directly from the airport to the Shenzhen urban area and nearby cities. Buses and ferries departing to Hong Kong and Macau are also available.

Read more about Shenzhen Airport transportation (including information about airport shuttle buses from the airport to the Shenzhen urban area, a Timetable for Intercity Buses to Nearby Cities and Ferry Transport for the Airport from Hong Kong and Macau).

Information for the most popular Guangdong regional bullet trains is below.

Travel times from Tsim Sha Tsui for example, including going to the station and passing through immigration, are now as short as an hour and 15 minutes compared to the sometimes 2 1/2 hour hassle and train transfers of entering through the crowded Luo Hu or Lok Ma Chau border crossings.

The new G class trains connect popular tourist areas in the three cities. It is now the way tourists prefer to travel to and from Kowloon/Central to anywhere near Futian and Shenzhen North. However, beware of complying with baggage limits, and make sure your passport and visa are ready for entry.

From West Kowloon Station, the Hong Kong HSR quickly and conveniently whisks people in about 16 minutes to Futian and about 19 minutes to Shenzhen North.

The G train takes people to Guangzhou South from Futian in about 49 minutes and from Shenzhen North in about 30 minutes.

The older D class high speed trains from Shenzhen to Guangzhou date from 2007 when the line was opened. It was one of China's first bullet train lines. These trains offer convenient service from the Shenzhen Railway Station at the Luo Hu Border Crossing to Guangzhou East Station in Tianhe and Guangzhou Station at the center of the city, and it stops also in Dongguan that is a very large city between Guangzhou and Shenzhen.

Tianhe and the adjacent Zhujiang New Town and Canton Tower areas are the areas in Guangzhou that attract most tourists. So, even though these D trains are a little slower, if you are going to these areas, it might be much faster to go by this D train instead of a G train.

Trains to the Main Tourist Cities in China

High-speed trains go to Guilin, Beijing, and dozens of other cities.

For Shenzhen, You Have Many Train Options

Tourists have the option of an array of train choices they can utilize to go between Shenzhen and Guangzhou depending on where they want to go and what they want to do.

Use the most convenient one for the places in you are going/coming from. There more than 90 D and C class high speed trains running between Shenzhen and Guangzhou every day. There are also conventional T trains (special fast trains), Z trains, and the least expensive K trains (regular trains) to Guangzhou.

The main conventional railway lines including long-distance overnight bed cabins leave from Shenzhen West Station primarily, but some also leave from Shenzhen Station. These are useful to save money and if you want to experience Chinese culture on the trains or if you want to sleep on trains as you travel to cities without high speed trains as yet.

Shenzhen West Railway Station is located at the junction of Yueliang Wan Avenue (月亮湾大道) and Xuefu Road (学府路), and about 20 trains arrive each day at the station. Most of these trains run from Shenzhen to Huaihua, Yueyang, Xinyang, Wuchang, Hefei and other cities. During the holidays, especially the Spring Festival holiday, the railway station is used as temporary station for many trains.

There are 8 ports in Shenzhen like Yantian Port, Shekou Port and Chiwan Port. Among them, Shekou Port (蛇口港) and Fuyong Port (福永码头) are the most popular passenger transport ferry terminals. Passengers can take a ferry from Shenzhen to Hong Kong, Hong Kong International Airport, Kowloon, Macau and Zhuhai.

Shenzhen has an efficient network of buses. Bus ticket prices vary from 1 yuan to 3 yuan. There are also five tourist lines that connect to all of the tourist attractions.

The Shenzhen subway network consists of five lines, which are available from 6:30 am to 11:00 pm every day. (During holidays such as the Spring Festival holiday, the May Day holiday, the National Day holiday and New Year’s Day holiday, service may go to midnight.)

Buying a subway ticket is very easy because every subway station is equiped with bilingual electronic vending machines that allow passengers to buy one-off green tokens. Passengers can change languages on the large touch screeen, and then click on the station where they want to go. The price is then displayed, and passengers then insert money at the top pf the machine (only banknotes of 5 yuan or 10 yuan are accepted, as are 1 yuan and 0.5 yuan coins).

Taxis in Shenzhen, which are red, yellow or green, are plentiful on the streets. Green taxis are only available in the Special Economic Zone (Baoan District and Longgang District are not included in the zone). Some taxi drivers are rated as star-level drivers because of their good knowledge and English speaking skills.

Safety: Be aware that some drivers or people in fake taxis wait especially for tourists to scam you by overcharging or giving counterfeit money.

Taxi fares for within the Special Economic Zone: The flag down fare is 10 yuan for the first 2 kilometers (about 1.2 miles), and 2.4 yuan for each additional kilometer. From 6:00 am to 11:00 pm and for a distance above 25 kilometers (15.5 miles), 30% of the fare (removing the flag down fare) is charged as a demobilization cost. If you need the taxi to wait for you, an addition fare of 0.8 yuan per minute is charged.

Our tour guides can help you explore Shenzhen. Our private drivers can facilitate convenient and quick transportation.

All our tours are modifiable. Contact us for a bespoke private tour.