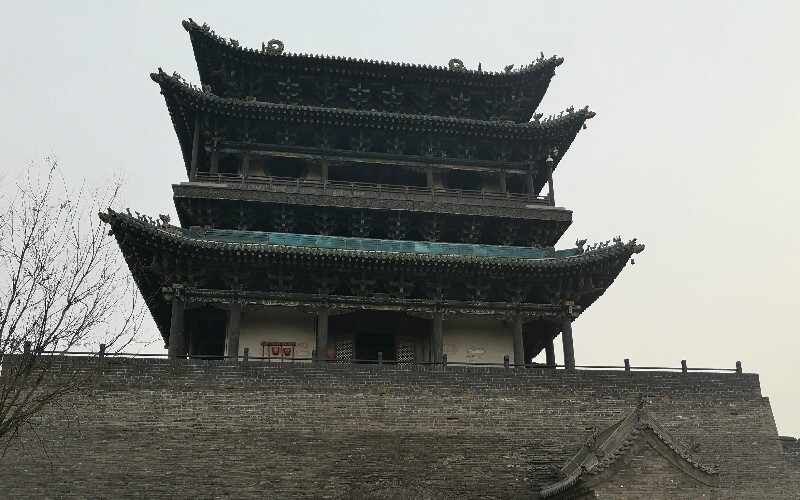 Piantou Pass has an irregular shape and is 1,100 meters long from east to west. At the east, west, and south gates are three ancient walls, where brick masonry stands approximately 10 meters high.

Between South Gate and West Gate, much of the brick masonry still exists and is quite magnificent. The fort wall next to the Yellow River was constructed in 1468 and later rebuilt during the reigns of the Jiajing Emperor  (1796－1820) and the Wanli Emperor  (1573－1620).

After hundreds of years of natural and human destruction, the only remaining wall is not as magnificent nowadays as it was in ancient times.

The average width of the wall measured seven meters at the base.

The Piantou Pass fort was constructed during Emperor Hongwu's reign in 1390 to act as part of the defense system of the Great Wall. For three years of the Wanli Emperor's reign (around 1575), the pass was modified into a fortress. Nowadays, along the shore of the Yellow River in the Hualin Castle (Huàlínbǎo /hwaa-lin-baoww/) section, there still exists much of the rammed earth of a wall of 30 km  towering above the river and it's very spectacular.

Piantou Pass was at the northern boundary of Chinese territory during the Ming Dynasty, with the Mongolian Plateau to the north and Ordos Plateau to the west across the Yellow River. The inner and outer sections of the Great Wall met in Lao Ying castle (老营堡 Lǎoyíngbǎo /laoww-ying-baoww/), the east of the Piantou Pass fort..

In its early days, Mongolian attackers continuously entrenched the border, and then repeatedly attacked the north of Shanxi, which highlighted the importance of this pass. During the Ming Dynasty, Piantou Pass had more guarding forces than Ningwu Pass and Yanmen Pass.

One kilometer southeast from Piantou Pass, there stands a tower named Lingxiao Tower  (凌霄塔 Língxiāotǎ /ling-sshyaoww-taa/) which was built during the Ming Dynasty.

The first two floors of the base tower, with a perimeter of 29 meters and a height of 35 meters, are shaped like a pen, hence the name 'Pen Soaring to Heaven' (文笔凌霄 Wénbǐ Língxiāo /wnn-bee ling-sshyaow/). From the second floor, there were four windows on every floor and hidden stairs were built inside the wall. It has been well-preserved.

Zigzagging along the shore of the Yellow River, this section of the Great Wall from the Ming Dynasty measures 100 kilometers long. 'Old Ox Bay' is its north end and Shiti Pass  (石梯口shítīkǒu /shrr-tee-koh/), Hequ County, Shanxi Province is its south terminus.

This section of the Great Wall was built with local stone. On the steep and lofty cliffs there are continuous Beacon Towers to signal enemy approach and numbers.

The Pianguan Great Wall SectionPianguan's Great Wall fortifications were broad during the Ming and Qing dynasties. In the basin, with its surrounding mountains, Pianguan Fort looks like a giant rhino resting its head on Taliangshan Mountain with its body lying in the river. This is due to the mountain's high east side and low west side; hence it is also known as 'Rhino Watching Moon' (犀牛望月 Xīniú Wàng Yuè /sshee-nyoh wung ywair/).

Ancient houses using cyan tiles were built using local clay, show the charm of ancient times, and can be dated back to the Ming and Qing dynasties. The Bell and Drum Tower in the city center is very magnificent with a strong base and arch, red walls, and cyan tiles.

There were also 108 grand temples within the ancient fort.

You can take a bus from Taiyuan to Pianguan. There are four daily buses departing from Taiyuan Bus Station. It takes about five hours.

China Highlights can help you avoid any hassles associated with the trip. If you want to visit Piantou Pass, contact us and we can help you design a tour according to your requirements.