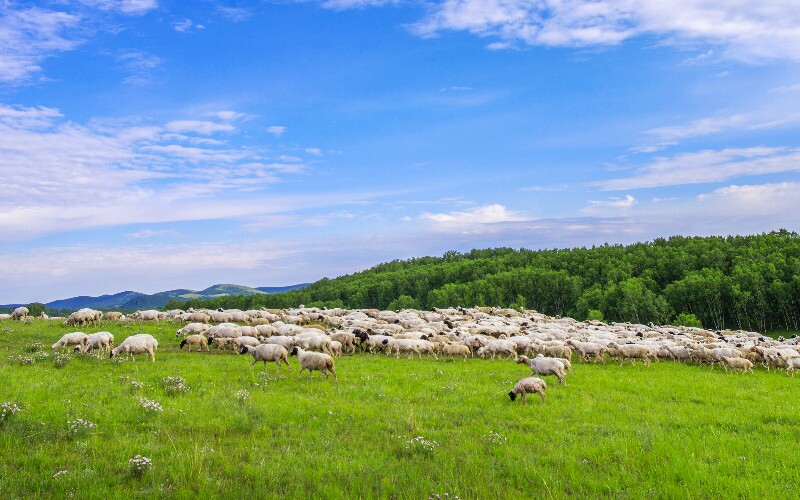 Located in the northeast of Inner Mongolia, Hulunbuir Grassland is one of the top famous grasslands in the world with natural grassland coverage of about 80%. Its lush plants, unpolluted air, flocks and herds, unique ethnic culture, and Genghis Khan history fascinate and attract people for a visit.

Scroll down to find key travel info and things to do on Hulunbuir Grassland, or contact our Inner Mongolia expert for more information.

A vast region with beautiful scenery, lush plants, over 3,000 crisscrossing rivers and 500 lakes dotted around, Hulunbuir Prairie is like a huge, green picture scroll, which gives you boundless views. It is the best-preserved grassland at present in China and has more than 120 kinds of pasture, such as alfalfa and wheat grass, hence it is known as "The Grass Kingdom".

With the most plentiful and excellent pastures in China, Hulunbuir also has the name "The Purest Prairie" since there is hardly any pollution there. Its produce, like meat, milk, leather, wool, and other animal products, are favored by people both domestically and in other countries. It's the place where Genghis Khan was born and is also a famous tourist area.

With the irrigation of thousands of rivers, the prairie presents itself as a green carpet underneath the blue sky and white clouds, with warblers, flocks and herds, and other wildlife all over the prairie. You can ride on camels and horses, watch wrestling and horse racing, eat a 'lamb feast' with a "grassland flavor", and enjoy an ethnic bonfire party in the evening — the unique lifestyle of Mongol nomads can be fully appreciated.

Located in the northeast corner of China, Hulunbuir has a temperate continental climate and very low temperatures in winter.

Hulunbuir Grassland is best for a grassland-activities visit from June to September. July and August are the two best months when the grasslands are lushest and most suitable for horseback riding, fishing in the hinterland of the prairie, or boating on the Hulun and Buir lakes.

Hulunbuir's grasses normally turn yellow in early September, but it is a good time to appreciate red and yellow leaves in the eastern forest area of the prairie.

A winter visit is best from November to mid-February to attend the Winter Nadaam or go skiing.

The Legend of Hulunbuir

Hulunbuir Grassland is named after Hulun Lake and Buir Lake.

According to the legend, a brave Mongolian tribe had a blessed couple. The girl, named Hulun, was good at singing and dancing and was endowed with both beauty and talent, while the boy, called Buir, was extremely strong and was talented in riding and shooting. When they fought against a demon for love and the safety of the prairie, the girl turned into a lake and drowned the demon, then the boy jumped into the lake for the girl and another lake was formed, thus creating the two lakes of Hulun and Buir.

Aobao is one of the most celebrated sacrificial ceremonies in Mongolia. Always held in the mountains or hills in the May to August period, stones are heaped into a solid conical tower with a long rod inserted into the top and colorful livestock wool and scripture cloths tied onto the head of the rod.

The aobao ('heap of stones') is surrounded by more stones with burning cypress joss sticks. Branches are inserted into the ground beside it with offerings of a whole sheep, koumis (fermented equine milk), butter, and cheese, which everyone enjoys afterwards.

The festival is for local herdsmen to pray for a prosperous harvest and safety around the aobao.

An Aobao in Hulunbuir Grassland

Nadaam Festival is held twice a year on Hulunbuir Grassland. Summer Nadaam is around late July and Winter Nadaam is in late December. The festival shows off Mongolian culture brilliantly in its different aspects: singing and dancing, sports, ethnic dress, and Mongol food. Horse racing, wrestling, and archery are the three 'manly sports' (or nadaams) for the Mongolians.

Wrestling is one of the grandest athletic activities for Mongolian people, which 700 years ago become an event in the Nadaam Festival.

The horse and bow were important hunting tools and war weapons for Mongolian peoples since ancient times. The Mongolians are known for being good at horse riding and archery, which about 700 years ago began their development as Nadaam sports.

4 Things to Do on Hulunbuir Grassland

Before you enter a tribal settlement, the herdsmen will first toast you with wine, welcome you with songs and dances, and present you with a hada (a Tibetan ceremonial silk scarf).

The wonderful performances of horse racing, wrestling, and archery will bring you a sense of the skill and strengths of the Mongol people. Aobao, the shamanist cultural ceremony, shows you the Mongols' traditional way of sacrifice. Paying a visit to a nomad's yurt, you can listen to their grassland stories (contact us for a guide who can translate for you).

You can also take a horseback ride on the endless grassland or just relax on the giant carpet of green, watch the clear blue sky, and breath the fresh air.

Do not miss the chance to taste some local favorites such as roasted mutton leg, roasted whole lamb and other traditional ethnic foods including milk tea, naigan (dried milk), naipi (the skin on boiled milk), cheese, and roasted grains.

4. Join in an Awesome Bonfire Party

A bonfire party is another way that the local Mongols show their hospitality to guests. During the party, locals wear traditional costume while they sing and dance around the bonfire. Join in the party for an unforgettable grassland experience.

Cannot wait to visit Hulunbuir Grassland? Contact us and we'll tailor-make an Inner Mongolia grassland tour for you.

The heartland of Hulunbuir Grassland is only 40 minutes' drive from Hailar District of Hulunbuir City in Inner Mongolia. You can reach Hailar either by flight or train.

Hailar Dongshan Airport is only 7 kilometers (4 miles) from the city, with flights to Beijing, Hohhot, Xilinhot, Shenyang, Harbin, etc.

Bullet trains are not available in Hulunbuir. You can take a normal speed train from Beijing, Harbin, Hohhot, or Baotou to Hailar which takes 10–30 hours.

No matter whether you arrive by flight or train, when traveling to the grassland area, a private transfer with an English-speaking guide service is highly recommended for a hassle-free experience.

Staying in a Hulunbuir Grassland Yurt

Hulunbuir Grassland offers Mongolian yurt accommodations to provide you an experience of the traditional way of nomadic life. You may find flocks grazing around your yurt, and the bleeting early in the morning may wake you up. In the evening, the pristine starry night provides the feeling that you are in the center of the galaxy.

However, the condition of yurt accommodation is quite basic. Toiletry supplies are not provided, and you need to bring your own. Hot water does not last long due to the use of solar energy water heaters, and so you may need to limit yourself to a quick shower.

The Mongolia yurts are in high demand during summertime and it is wise to book as early as possible. Contact us for a booking.

When traveling on such a vast grassland with exotic scenery and peoples to discover, you may need a reliable travel agent to assist you with the planning and tour guiding. We would be happy to tailor-make a memorable Hulunbuir Grassland tour for you. Just tell us your travel needs.