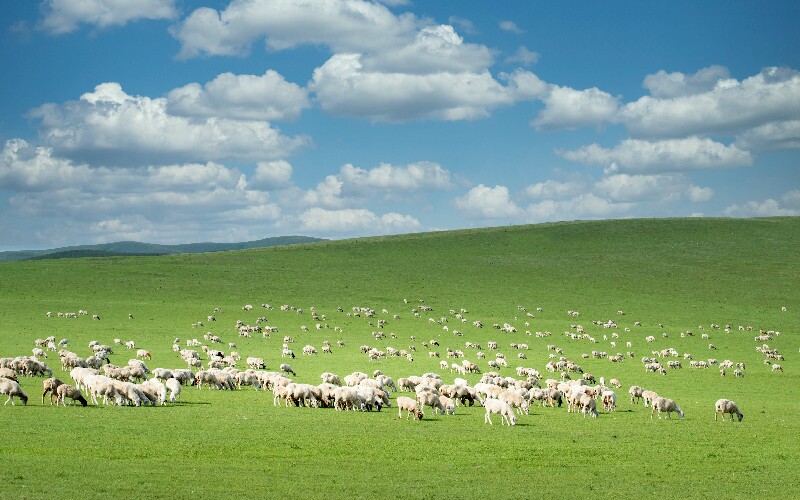 Hulunbuir Travel Guide — How to Plan a Trip to Hulunbuir

Hulunbuir, with Hailar District as its administrative center, is a prefecture-level city in northeast Inner Mongolia Autonomous Region.

Hulunbuir is the gateway to China’s greatest grasslands, with wetlands, forests, lakes, and rivers that have not been tainted by human industrial civilization. The northwest of Hulunbuir Prefecture borders Russia and boasts exotic customs. A Hulunbuir tour is a mixture of nature beauty, ethnic culture, and exotic charm.

Scroll down to find out interesting facts about Hulunbuir, the best times to visit, top things to do, and other travel tips.

Hulunbuir spans an area of 264,000 square kilometers (102,000 square miles, larger than the UK or Georgia), but has a population of only 2.7 million. Hulunbuir adjoins Heilongjiang Province in the east, and shares borders with Mongolia to the west, and Russia to the north by the Ergun River.

The history of Hulunbuir can be traced back to 209 BC, when the Huns united the grassland territories in North China, and Hulunbuir became one of the king's possessions. Today there are 32 ethnic groups living there, including Han, Mongolian, Manchurian, and Daur.

There is not much rainfall in Hulunbuir, and the annual precipitation is about 400 millimeters (16 inches). Rainfall in summer (especially in July and August) is up to 70% of the yearly amount.

The best time to visit Hulunbuir is from late May to mid-September, when the weather is the most pleasant.

There is a wide temperature range within a day and particularly day to day in the middle seasons. Please bring jackets and trousers for the cool morning/evening hours. Raincoats are more practical than umbrellas, because the rain usually comes with strong winds.

In summer, especially from July, there will be many mosquitoes on the grasslands. Please bring mosquito repellent, and wear comfortable walking shoes instead of sandals.

7 Top Things to Do in Hulunbuir

Hulunbuir is known for its endless grasslands, but there are far more attractions to visit. Hulunbuir also has virgin forests on the Greater Khingan Range, the “No. 1 Wetland in Asia” — Ergun Wetland, China’s fifth largest freshwater lake in the south — Hulun Lake, and China’s coldest village — Genhe.

1. Dive in the Endless Hulunbuir Grassland

The famous Hulunbuir Grassland, with a total area of 93,000 square kilometers (36,000 square miles), is one of the largest and best-preserved grasslands in the world. The endless grassland is like a giant carpet of green, dotted with white yurts, herds of cattle and sheep, and winding rivers and lakes.

A visit to Hulunbuir Grassland may include a visit to either Golden Horde Mongolian Tribe or Chen Barag Banner who cater tourists with many featured grassland activities. You can ride horses or camels or take a grassland cart around the grassland, paddle a boat and fish on the lakes, enjoy the sunset at the Morigele River or hunt in a nearby forest.

The authentic foods of the herdsmen, such as roasted lamb, mutton hotpot, fish feasts, as well as many dairy products are something that cannot be missed.

The Naadam Grassland Festival is held twice a year on the Hulunbuir Grassland: Summer Naadam is around July/August and Winter Naadam is in late December.

In Mongolian, nadaam means ‘entertainment games’. It is a way for herdsmen to express their joy about their harvests.

In addition to exciting games, it is a visual feast: Mongolians of all ages dress in brightly-colored traditional clothing and perform unique Mongolian dances.

During the Winter Naadam Festival, large ice and snow sculptures form its background. It is a spectacular picture on the otherwise featureless and vast snowscape.

More on the Naadam Grassland Festival >>>

Erguna Wetland or Genhe Wetland is praised as the “No. 1 Wetland in Asia”. There you can see endless bushy meadows, which are rich in wild animals and plants, and one of the most important breeding grounds of red crowned cranes in the world.

There is a Wetland Museum in the park. Its unique architectural style is perfectly integrated with the surrounding environment.

Aoluguya, meaning a place with flourishing aspens, is the place where the last hunting tribe in China, the Ewenki, live.

Ancestors of the Ewenki lived in the dense forests by hunting and raising reindeer for generations. Now they live in the outskirts of Genhe City, but they keep their simple and traditional lifestyle.

In Aoluguya, you can get close to the reindeer and feed them with unpolluted moss. It is surely where Santa Claus would live in China.

A Reindeer at Aoluguya Tribe

Lengji Village is said to be China’s coldest village with an unbroken record of -58°C (-72°F).

If you take a tour to Lengji Village, you will stay with a traditional forest family, participating in their daily life, making dumplings with them, making sugar gourd, and roasting sweet potatoes, etc. It would be quite an unusual but memorable experience to taste the extremely cold traditional northeast China life in the coldest inhabited place in China.

Other featured entertainments of the forest area, such as ice pushing, ice car riding, and wood sawing and chopping are waiting for you.

Moerdaoga National Forest Park is currently the largest forest park in the cold temperate zone in China and is the best places to see larch trees and white birches.

In summer and autumn, a small sightseeing train can take you to appreciate the virgin forest, mountains, streams, islands, folk villages, and pastures.

This circular route is about 10 kilometers (6 miles) in length with four stops. Each stop has a walking trail where you can further discover the forest.

Manzhouli, China’s largest land port bordering Russia, is where you can see many Russian faces. Matryoshka Square is a must-see if you are traveling with children, where you would find over 200 oversized or small Matryoshka dolls. It is also a place where you can appreciate Russian crafts, taste Russian cuisine, and buy local souvenirs.

There are around 5 airports in Hulunbuir, but among them only Hulunbuir Hailar Airport and Manzhouli Xijiao Airport are frequently used by tourists.

Hulunbuir Hailar Airport is only 7 km (4 miles) from the city downtown area, connecting Hulunbuir with Beijing, Shanghai, Hohhot, Shenyang, Dalian, Harbin, Tianjin, etc. From Beijing to Hulunbuir and from Hohhot to Hulunbuir, flights take only 2 hours.

International flights are available from both airports to countries like Russia and Mongolia (COVID-19 restrictions permitting).

Airport shuttle buses are available with no fixed departure time (generally leaving when full up). It would be more convenient to either take a taxi or our private airport transfer with English-speaking guide service.

The main railway stations in Hulunbuir are Hailar Railway Station and Manzhouli Railway Station. You can get to Hulunbuir by taking a train from Beijing, Tianjin, Shenyang, Harbin, Hohhot, Baotou, and Dalian but only normal-speed trains are available, which take over 32 hours.

You have plenty of choices of hotels in Hulunbuir.

In the city areas, international-standard hotels like the Shangri-la or local-brand hotels are your choices.

Traveling in north Hulnbuir, staying in a mukeleng house or the Manzhouli Matryoshka Hotel, decorated with Matryoshka dolls and inside a huge doll, will give you a very Russian feel.

In the eastern part of Hulunbuir (Genhe), try a kang (a heatable brick bed) during a homestay and be like a local.

Having problems booking a suitable hotel? Contact us for assistance.

The vast grasslands in Hulunbuir are natural grazing grounds for cattle, sheep, and horses. Numerous lakes and rivers there teem with fish and shrimps. They provide abundant ingredients for local cuisine.

Roasted whole lamb is a kind of precious dish for entertaining distinguished guests, sacrificing, and for opening ceremony of important events in Hulunbuir.

Their roasted whole lamb with its special flavor is also famous for its color, fragrance, taste, and shape. A two-year-old fat lamb is selected and killed. After scalding away the fleece and fishing out the viscera, the lamb is cooked, stuffed with seasonings, then roasted whole until it's done.

The abundant fresh fish and lake shrimps from Hulun Lake can be made into more than 100 kinds of dishes. There are different scales (excuse the pun) of fish feast, with 12, 14, 20, 24, or even more than 100 dishes for a table!

A Hulunbuir tour is generally divided into north and south routes.

The north is characterized by national forest parks and border visits. You can see the forest park and wetlands at the Greater Khingan Range, the ancient Ewenki tribe and their domesticated reindeer, and the Russian-style border towns.

The south is focused on grasslands, lakes, and Alshan Ski Resort. The Ba’erhu Grassland, Golden Horde Mongolian Tribe, and the Hulun and Buir lakes are in this area. This route can provide you with authentic experiences of Mongolian folk customs.

Below is a sample itinerary that combines both lines, which can be customized.

On arrival at Hailar in Hulunbuir, your private tour guide and driver will escort you from the airport or train station to your hotel.

Drive around 1½ hours to the heartland of the Hulunbuir Grassland and visit the Golden Horde Mongolian Tribe. Join in the featured grassland activities. Stay overnight in a Mongolian yurt.

Drive around 4½ hours to Moerdaoga and stop at Enhe Town on the way to enjoy a Russian-style village and wooden houses.

Visit Erguna Wetland and enjoy the endless bushy meadows there.

Your guide will see you off at the airport or train station.

With its vast and exotic areas, you may find it hard to arrange connecting transportation between destinations of Hulunbuir among other things. Contact our Hulunbuir expert for a worry-free customized tour.