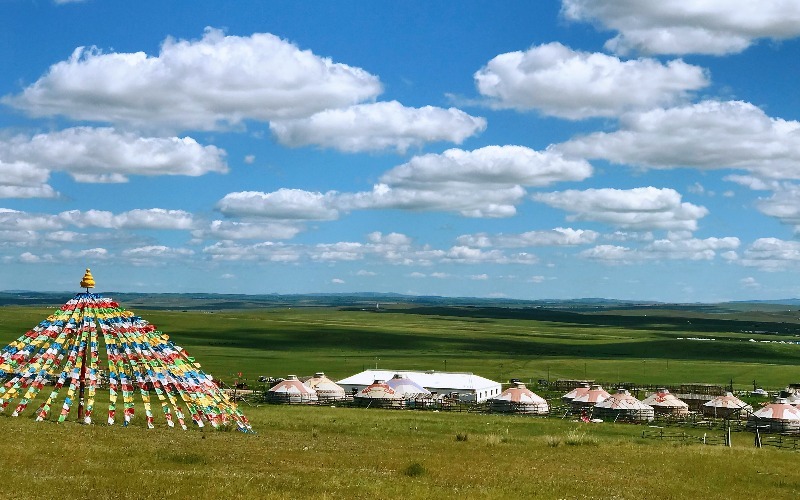 Hohhot Travel Guide - How to Plan a Trip to Hohhot

Hohhot is in the middle of the Inner Mongolian Autonomous Region and has served as its capital since 1954. It is also a transportation hub of Northern China, with easy access to Beijing, Tianjin, and Datong, and as well as Mongolia.

What Does Hohhot Mean?

In Inner Mongolia, the names of several cities end with the word hot. In ancient times, hot referred to (temporary) settlements of the nomadic peoples. With the process of urbanization, hot has come to mean 'city' nowadays.

Hoh in Mongolian means 'blue'. When translating into Chinese, it is qing (青), a color between blue and green. Thus, Hohhot also got the names "Blue City", "Qing City", and "Green City".

Top Things to Do in Hohhot City

Most Hohhot tours can be classified into two categories: grassland scenery or historical sites. When traveling in Hohhot, the following two things cannot be missed:

1. Visit the vast grasslands, dotted with herds of sheep and horses, and live like a nomad with an overnight stay in a Mongolian yurt.

2. Visit the historical sites: the ancient lamasery, temples, and tombs, and retrace the history and ethnic culture of Hohhot.

There are a few grasslands near Hohhot and below are the three most popular ones among visitors.

Xilamuren Grassland is the nearest grassland to Hohhot, within only 1½ hours' drive. It is also the earliest grassland to have been developed as a tourist attraction in Inner Mongolia, covering an area of 1,000 square kilometers (400 square miles) at an altitude of 1,700 meters (5,600 feet).

It is a typical plateau grassland with a chain of undulating hills around it. However, it has sparse grass and is suffering from severe desertification because of climate change, over-grazing, and tourism development in recent years.

Huitengxile Grassland means 'cold prairie' in Mongolian, covering an area of 600 square kilometers (230 square miles) at an altitude of over 1,800 meters (5,900 feet). It takes around 3½ hours to drive from Hohhot.

It is also called 'Yellow Flower Gullies' as the land there is full of yellow flowers. And there are 99 natural lakes interspersed throughout the grassland, called the '99 Springs'. The water in the lakes neither increases nor decreases with the weather, and it's always as clear as mirrors.

Given that winds are strong there, it is known as "the second-largest wind power plant in Asia". This grassland has developed in recent years and is a highly-regarded tourism destination.

Huitengxile Grassland might be quite different from your imagination of a prairie. Though the grassland is endless, the grass there is not luxuriant, and it looks more like a desert. You cannot see green lands, but blue lands instead. If rains are plentiful, the grass grows quickly. You can enjoy seeing a pure blue sky, white clouds, flocks, and herds.

Flocks and herds at Huitengxile Grassland

Gegentala Grassland, located deep in the Ulanqab Prairie, is 140 kilometers (87 miles) or about 2 hours' drive from Hohhot. There you can enjoy many performances, like horse racing, wrestling, archery, and bonfire parties.

How to Choose a Suitable Grassland

Tourism at the three grasslands near Hohhot mentioned above is well developed and they cater to both local and international visitors well. So which grassland should be chosen for your tour of Hohhot? Below are some tips for reference.

1. For those who don't like long-distance drives or have limited time but still want to appreciate the prairies, Xilamuren would be a good choice. The road conditions are good and you can return the same day or stay a night there.

2. For those who want to experience the Mongolian culture, pay a visit to Xilamuren where you can visit a local family or aobao to learn about the Mongolian sacrificial culture. Aobao is 'duizi' in Chinese, a conical stage made of stones with prayer flagpoles (or religious flagpoles) and branches standing upright on it.

3. For those who prefer horse racing, wrestling, archery, or hiking in a valley full of yellow flowers, we recommend Huitengxile.

4. For those who prefer to enjoy a genuine grassland (a more typical prairie), visit Gegentala as it is more like a prairie both in size and in its meadows.

The best time to visit the grasslands is from the middle of July to the early part of September. At this time, the views are the most charming, and the Naadam Festival is held during this period.

Mornings and evenings are very cool while the average temperature from July to August is 18 to 21°C (64–70°F) in the grasslands. The climate there is very changeable — you can often see it raining in the west but sunny in the east or different weather only separated by a mountain. This contributes to a wide daily temperature range.

Due to the great temperature differences between daytime and nighttime, you should take a coat and trousers when visiting the grasslands. Take a raincoat for the changeable climate. And be prepared with a sunhat, sunglasses, and sunblock as the plateau area has long periods of strong sunlight.

Mongolian-style accommodation areas are built at every scenic spot on the grasslands, including classical Mongolian yurts and log cabins of an antique flavor. Due to the widespread use of solar water heaters, it is hard to get an ideal temperature for your hot water.

There are plenty of activities you may experience during your visit to the grasslands. Here are some that might interest you:

Inner Mongolia Museum: This 4-story museum has a unique design and advanced equipment, displaying historical relics from the ancient northern minorities: the Huns, the Xianbei, the Qidan, and the Mongolians. Noteworthy cultural relics and folk arts are shown in the museum.

Five Pagoda Temple: It used to be one building: the Cideng Temple. Cideng Temple was ruined and only the five pagodas remain and that's how it got its present name.

Built of stone and bricks, the temple is 13 meters (43 feet) high and is composed of three parts: the base, the seating, and the top (five pagodas). In the lower seating, there are exquisite inscriptions of the Diamond Sutra written in Mongolian, Tibetan, and Sanskrit. The upper part of the base has a niche for a statue of Buddha and four devarajas.

Da Zhao Temple: Located in the old downtown area of Hohhot and established in the Ming Dynasty, it is the biggest temple belonging to the Yellow Hats, and it is one of the few temples without a Buddha in Inner Mongolia.

The Grand Mosque: It is located at the northern gate of the old downtown area of Hohhot and was established in the Qianlong Period (1735–96) of the Qing Dynasty. It is the biggest mosque in the city of Hohhot.

Hohhot has a temperate continental monsoon climate with changeable weather throughout the year. Its characteristics are: winter is long and severely cold; summer is short and hot; spring and autumn are most varied. See more on Hohhot Weather>>>

The temperature in Hohhot varies greatly between daytime and nighttime. The temperature at night can be 20°C (36°F) lower than that during the day! You should take warm clothes when traveling even if you go there in summer.

How to Get to Hohhot

As the capital city of Inner Mongolia, Hohhot can be easily reached by train or flight from the major cities of China.

There are many bullet trains running from Beijing to Hohhot every day. They take only around 2½ hours, departing every 20 minutes from 07:15 till 20:00.

Bullet trains are also available between Hohhot and its surrounding cities, like Ulanqab, Ordos, and Baotou.

A Train Running on the Inner Mongolian Grassland

Hohhot Baita Airport is only 15 km (10 miles) northeast of Hohhot City, with over 40 air routes connecting Hohhot with other major cities in China and internationally with Ulan Bator of Mongolia and Chita of Russia.

How to Plan a Hohhot Tour?

Normally, three days would be enough to visit the highlights in and around Hohhot. Spend a day to visit the grasslands and another 1–2 days visiting the historical sites.

Inner Mongolia is the home of Genghis Khan. You may extend your tour by two days for a visit to Ordos for the Genghis Khan Mausoleum and the Ordos Desert.

Make a free inquiry and our experienced travel consultants will design a customized tour for you.