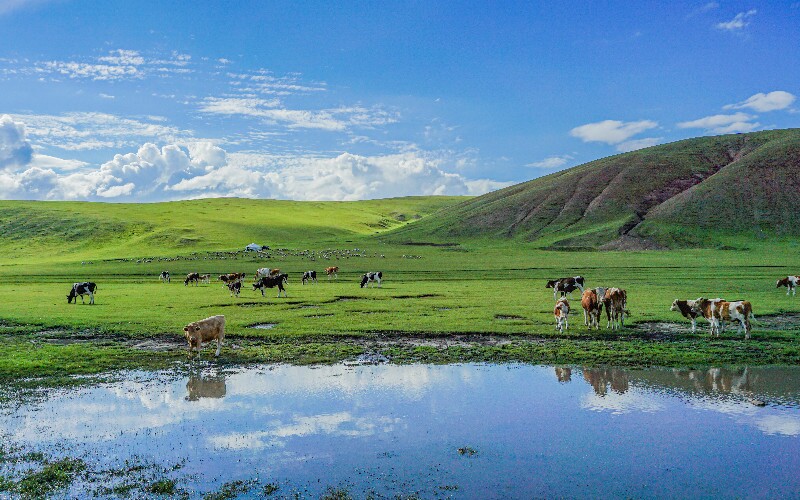 14 Top Things to Do in Inner Mongolia

Inner Mongolia is a beautiful place in the north of China with vast grasslands, massive flocks and herds, photogenic deserts, and diamond-like lakes. It was also the home of the great Genghis Khan — it's a Mongol ethnic region that is rich in history.

The popular tourist cities (prefectures) in Inner Mongolia are:

3 Top Things to Do in Hohhot — Trace Inner Mongolia's History

Dazhao Temple, revitalized by imperial decree, is the earliest Gelugpa Buddhist monastery in Inner Mongolia and one of the few temples without a living Buddha. The temple is known for its silver Buddha, golden dragon sculptures and exquisite murals.

The museum is a good place to explore the history of the Mongols and their grassland culture. There's also a breathtaking display of dinosaurs and other paleontology exhibits.

3. Learn about a Royal Mongol-China Marriage at Zhaojun Tomb

Zhaojun Tomb immortalizes and exhibits the marriage between a great beauty of ancient China, Wang Zhaojun, and the King of the Xiongnu tribe, Chanyu, and its great contribution towards the communication between their peoples in terms of economy, culture, technology, agriculture, and animal husbandry.

This is also a nice place to take a stroll with beautiful scenery. A legend says that each year, when it turned cold and the grass became yellow, only this tomb remained green, hence its other name: 'Green Tomb'.

With an altitude of 1,700 meters (5,600 feet), Xilamuren Grassland is a typical plateau grassland with a chain of undulating hills.

It is only 1½ hours' drive from Hohhot and people normally visit it in combination with a Hohhot city tour. Here, you can not only experience grassland actives like horse riding, a bonfire party, and Mongol singing and dancing, but you can also attend the Naadam Grassland Fair, which is normally held in July or August.

Known as “the little Potala”, it is the biggest and the best-preserved Gelugpa Buddhist monastery in Inner Mongolia. It is a special monastery, which had roles in both politics and religion: it has its own jail, court, and armory.

There are some 1,500 Buddhist statues and abundant fine murals, which depict historical characters, customs, myths, and beautiful landscapes.

1. Admire the Mongolian Hero's Exploits at the Mausoleum of Genghis Khan

The milky white walls, the red windows and doors, the golden top, and the blue cloud pictures all form a traditional Mongolian 'Eight White' Palace: the Mausoleum of Genghis Khan. A sacred place for Mongolian people, it is “like a flying eagle”, showing you the vigor of the prairie emperor.

The present Mausoleum of Genghis Khan was built in 1954. It is not really where he was actually buried, but it holds his clothing, which was buried in his memory. Actually, nobody really knows where he was buried, so it serves as a gathering place for Mongolians to offer sacrifices in memory of the great leader.

More on The Mausoleum of Genghis Khan>>>

The sandy slopes of Resonant Sand Gorge can make a hum not dissimilar to the (distant) roar of an aircraft on sunny days. The gorge is about 400 meters wide, with slopes of 45 degrees, and the sand there is fine and smooth.

It is more like a desert amusement park, with various activities: horseback and camel riding, sand sliding, zip lines... It would also be a great enjoyment to simply listen to the susurrations of the desert's shifting sands.

1. Explore the Birthplace of Genghis Khan — the Hulunbuir Grassland

Known as the “Kingdom of Pastures”, the Hulunbuir Grassland is the best-preserved prairie in China, covering an area of 9,900 square kilometers (3,800 square miles). It is also the birthplace of Genghis Khan.

Hulunbuir was named after two lakes: Hulun and Buir. The lakes are teeming with fish and shrimp, and wildflowers are everywhere in the spring/summer.

3. Have an Authentic Russian Experience at Enhe and Manzhouli

Enhe, one of the few Russian ethnic townships in China, and Manzhouli, bordering Russia, are places where you can experience a very strong Russian cultural atmosphere.

You will find traditional Russian-style wooden houses and fences, Matryoshka dolls, etc., as well as local people who have Russian faces but speak northeastern Mandarin.

4. Feed the Reindeers of the Mysterious Aoluguya Tribe

You will also get close to one of the oldest and most mysterious ethnicities in the world — the Ewenki. Ewenki means 'people walking down the mountain'. Now they live in the outskirts of Genhe City, but they have kept their simple and traditional lifestyle: their hunting, birch skin shelters, animal skin clothes, and Shamanist culture.

A Reindeer at the Aoluguya Tribe

Naadam, which means 'entertainment' or 'games' in Mongolian, also celebrates the joy of harvest, and is regarded as a great celebration among Mongolian people in Inner Mongolia, Gansu, Qinghai, and Xinjiang. It is held in summer (July or August), when the livestock are fat and strong.

The festival usually lasts for 5 to 10 days, and during the fair, men and women, old and young wear their holiday costumes and take part in the activities.

The main activities at a Naadam fair include horse racing, wrestling, archery, polo, playing Mongolian chess, martial arts, and other competitions as well as performances. Folk dancing and singing are performed during the fair, and Mongolians are good at both of them!

There is also trade at the fair. Many kinds of products, such as local products and animal products from different places, are exchanged there.

Note: The venues and dates for holding the festival vary each year and it is advisable to have a travel agency assist with the arrangements. Contact our travel consultants for assistance.

2. Stay in a Mongolian Yurt

The best way to experience Mongolian traditional customs is to stay in a Mongolian yurt for a night. During the daytime, you may ride a camel in the vast desert or grassland. While at night, you can join in a bonfire party with Mongolian singing and dancing.

Lamb, milk, wild vegetables, and wheat feature highly in Mongolians' daily dishes. Their cooking methods are relatively simple, among which roasting is most used.

China Highlights is keen to use the best local restaurants for our clients. Contact us for an authentic Inner Mongolia food experience.