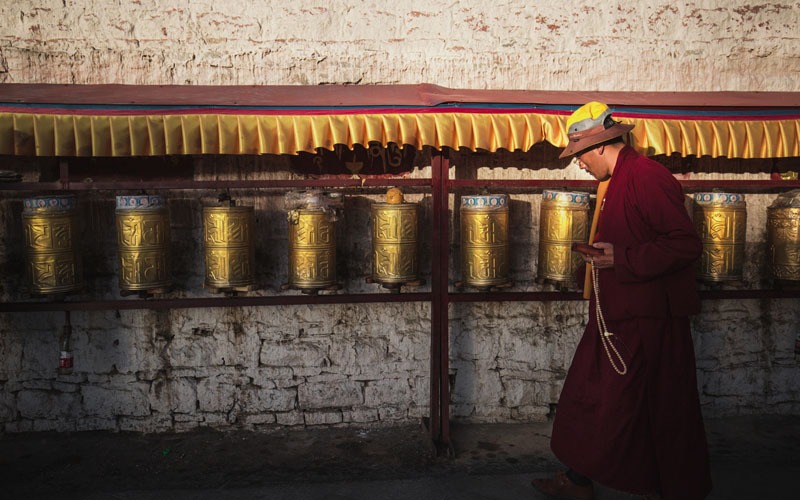 Sakya Monastery in Tibet is a spectacular tourist attraction that’s known for its collection of Tibetan murals, chanting monks, sacred Buddhist scrolls and books and thangkas.

Sakya Monastery is the principle temple of the Sakyapa sect of Tibetan Buddhism. Its main hall can accommodate 10,000 chanting monks. More than 40,000 sacred scrolls, including the priceless Burde Gyaimalung, are housed here. Some scrolls are written with gold.

The Meaning of Sakya

The founder of the Sakyapa sect, Khon Konchog Gyalpo, built the white palace on the Chun Qu River in 1073 on a gray clay hill. Residents named the temple “Sakya”, which means gray soil. All that remains of this northern temple are ruins.

Construction of the southern monastery began in 1268, led by Benqen Sagya Sangbo. This monastery, commissioned by Choygal Phakpa, the fifth descendant of Sakyapa Sect, ordered that the walls be painted gray, white and red to honor three Buddhist tulkas, who are revered as lamas.

Kublai Khan Arrives at the Monastery

Many of the Thangkas at the monastery are dated from the Yuan Dynasty, which is from 1271 to 1368. The meeting of Kublai Khan with Phapka is the most famous historical thangka at the monastery.

The teachings of the Sakya Monastery reached Kublai Khan, the Mongol ruler of China, in the 13th century. He invited Sakya Pandita to his court to teach Buddhist philosophy. Through the teaching of Pandita, Vajrayana Buddhism flowered in China.

Forty immense vermillion pillars support the ceiling. Four are large, standing out from the others, and depict different mystical Buddhist stories. Kublai Khan bestowed one of these pillars to the Tibetan people.

The other three were carried to the monastery by a tiger, the god of the sea and a wild yak. On the second floor of the monastery are 63 well-preserved mandala murals.

The monastery is filled with historical artifacts, including porcelain pieces, embroidery and representations of the Buddha. A black wooden casket holds the white clarion given to the Tibetans by Kublai Khan.

Also on display is an ancient conch shell used by monks to call their followers to the monastery’s teachings.

Major parts of the monastery that were destroyed by China’s Cultural Revolution have been restored. As they have done for more than a thousand years, the Vajrayana Buddhism practitioners are again at the monastery, practicing their religion and welcoming pilgrims and tourists.

The monastery is located in Sakya about 100 miles from the Nepal’s border in the Tibetan prefecture of Shigatse. This monastery is also known as Pel Sakya or White Earth.

This location was considered an auspicious place to build a monastery. A revered Indian master named Atisha foretold that incarnations of Avalokiteshvara, Manjushri, Mahakala, and Vajrapani would take birth here and perform great deeds to benefit all mankind and the Dharma. Dharma is the law or the state of the universe as it is, as taught by the Buddha.

A Place of Scholarship and Teaching

Through the centuries, this monastery has been expanded, and it now includes hundreds of shrines, temples and housing for monks. It contains libraries of sacred scriptures written in Chinese, Tibetan and Sanskrit that are literally stacked from the floor to the ceiling.

Since the 14th century, Sakya monastery has been a focal point for offering scholarship and teachings. Ten scientific disciplines from India were introduced to Tibet through the monastery.

Sakya Kloster houses about 40,000 volumes of sacred Buddhist scriptures. Inside this monastery is a massive wooden bookshelf that holds about 10,000 scriptures. The bookshelf is 187-feet long (57-meters), 36-feet high (11-meters) and three-feet wide (one meter). This is where 10,000 scriptures rest.

The unique Burde Gyaimalung is a record of Tibetan religion, philosophy, history, agriculture and literature. This sacred scripture is 1.8 meters (6 feet) long, 1.3 meters (4 feet) wide, and 67? centimeters (2 feet) thick. This is the largest scripture in the world.

The monastery also houses sacred Buddhist scriptures penned on Patra leaves. There are 21 volumes, each consisting of 100 to 200 pages and embellished with intricate four-color drawings. When it comes to the sutra genre, these are the most valuable in the world.

In 2003, monks discovered a treasure of 84,000 scrolls carefully sealed in a wall. Scholars speculate that these works haven’t been seen in hundreds of years. The Tibetan Academy of Social Sciences is currently assessing these works.

The monastery is filled with more than 3,000 sacred thangkas. A thangka is a Tibetan silk painting embellished with embroidery. These thangkas will portray representations of Tibetan Buddhist deities, a mandala or a natural or historical scene.

Thangkas are made by painting or using embroidery to create a picture. Next, a textile or fabric is laid over the picture. Finally, the entire thangka is protected with an overlay of silk. This process allows Thangkas to remain vibrant in color for centuries.

Thangkas are used as tools to teach Tibetan Buddhism. Popular subjects for thangkas are the life of Buddha, Buddhist deities, lamas, and bodhisattvas, who are beings of enlightenment.

The collection of mandala Thangkas here is unequaled anywhere in the world.

The Lakhang Chenmo is the main chanting hall at the monastery. Tourists from around the world travel here to hear the haunting sound of Tibetan monks chanting their sutras.

This main chanting hall sprawls across 5,800 square meters or about 1.4 acres. It can hold 10,000 chanting monks. The monastery enshrined three Buddhas here. They are Sakyamuni, Dipankarara and the mystical Maitreya, who Tibetan Buddhists believe will appear and free the world of misery and lead mankind to enlightenment.

We at China Highlights offer tours to Sakya Monastery. Customers can be assured of an authentic Tibetan and Chinese experience.

Local guides in Tibet will share interesting information at Sakya Monastery. As dedicated travel professionals, we will assure guests of the best lodging and restaurants. Contact China Highlights today to plan your adventure in Tibet.