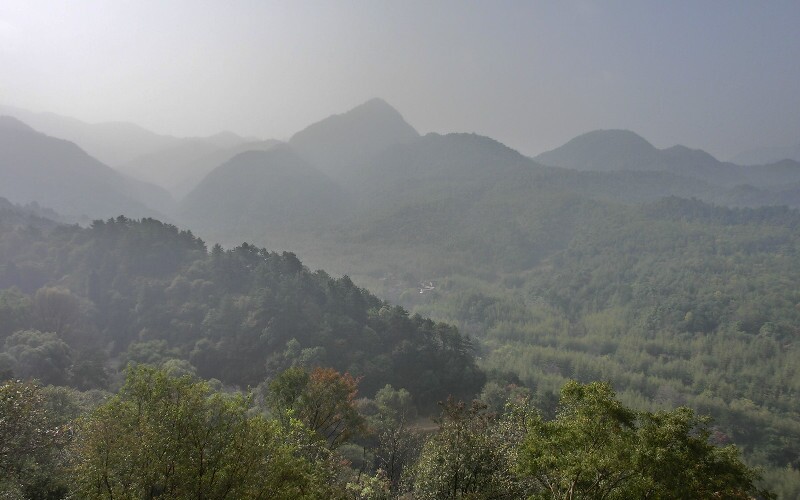 The Water Curtain Cave is a natural cave about 50 meters high and 30 meters wide and 30 meters deep. During the rainy season, water flows over a fall like a jade bead curtain. In the cave there are ten small buildings such as Sisheng Palace, Guanyin Temple and Laoju Chamber built in the Sui Dynasty. Near the cave is Laoshao Temple that was built in the Beiwei Dynasty. A large number of works of grotto art dating from the Beizhou Dynasty to the Yuan Dynasty are preserved in Laoshao Temple. There is a large fresco there over 40 meters tall on a huge cliff with guarding animals. The fresco covered about 2/3 of the cliff, and the part that remains is extremely precious. On the top of the cliff were built eaves to shelter from the wind and rain. On the eaves were carved flying clouds and walking animals, and real brass bells that rang. These patterns and features, influenced by Hinayana Buddhism, are very rarely seen in Chinese grotto art.

Another cave is called Thousand-Buddha Cave for the large number of carvings there. Its one side cliff was separated by the wooden plank road into two sections, frescoes and suspended statues. The remains of originally seven grottoes in the cave are statues and frescoes with plump figures and distinctive looks. Especially, the comely statue of Bodhisattva features the style of the Beizhou Dynasty. And part of the molding contains a relic of the Beiwei Dynasty. All this is important information for researchers of early Chinese grotto art.

Features:
A great number of big Buddha frescoes of several dynasties, Beiwei, Sui, Tang and Yuan, are preserved on a cliff.

Address:
The Water Curtain Cave grotto group is located in a valley of the Zhoulou Mountain, about 30 kilometers northeast from Wushan, Tianshui City.

The site was first built in the Latter Qin Dynasty of the Sixteen Kingdoms Period, and it was renovated in the Beiwei, Beizhou, Sui, Tang and Yuan dynasties. The first Buddha image was carved here about 1600 years ago, and other people kept carving more of them for hundreds of years. The whole site consists of five famous sights: the Visionary Pool, Lashao Temple, the Thousand-Buddha Caves, the Water Curtain Caves and Samcheong-Dong. Among these, the cliff-side inscriptions, sculptures, frescoes and wooden copings in Lashao Temple and Thousand-Buddha Cave are the most precious relics.

How to get there: there are coaches at Wushan county bus station for Zhoulou Mountain.