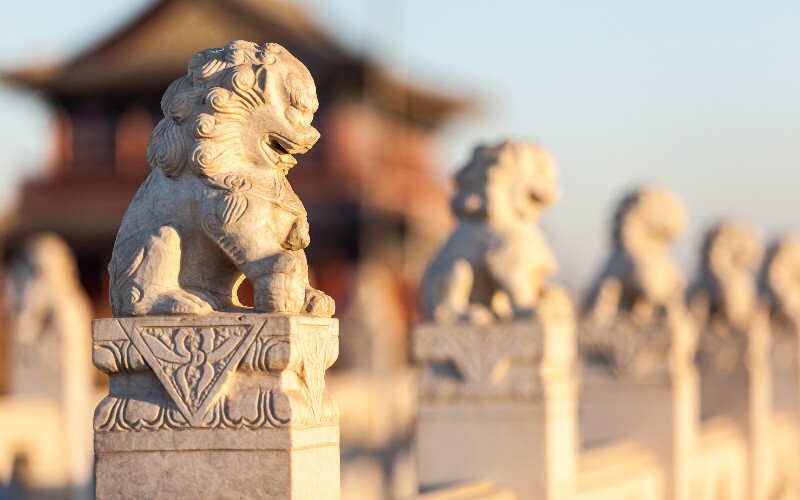 China's Stone Lions — the Lowdown and Many Photos

It is impossible to spend any amount of time in China without becoming familiar with its stone, sometimes bronze, lions. Indeed, they are so numerous, they tend to blend into the background, and that is unfortunate. These creatures are not only of interest historically and as a distinctive aspect of Chinese culture, but also works of art in themselves, each a variation on the theme distinctive to the stonemason who chiseled it from the rock. In this item, we hope to aid you in your appreciation of these creatures, and perhaps lead you to look more closely the next time one passes you by.

These stylized guardian lions, known in Chinese as shi or shishi (石獅 shíshī /shrr-shrr/ 'stone-lions' — there's a popular tongue-twister associated with the tones), sometimes as 'Foo Dogs' in English, originating not in China itself, but in Persia. Presented as gifts to the Han court by Persian diplomats, by the sixth century CE they had become popular as guardian representations for the rich and powerful.

The image of the lion played particularly well in China given its associations with Buddhism in which it is seen as the protector of the spiritual teaching, or 'dharma'. For some time, depictions of the guardian lions were in a considerable state of flux in terms of their stylized appearance, their poses, and those things with which they were associated.

It was not until far later, in the Ming and Qing dynasties, that the imagery associated with the guardian lions settled down into its current form with two lions, one male, one female, flanking the entranceway to the premises they protect.

The symbolism of the lions begins with their gender, one male, one female, reflective of the long Chinese Taoist tradition of the yin and the yang, familiar in the west as the white and black 'tadpole' forms intertwined with their opposite-shaded eye.

The male lion, symbolic of the Yang, usually has one paw placed upon a ball. It may come as some surprise to know that the ball is actually supposed to be embroidered and not, as may be expected, representative of some weapon or other masculine accessory.

The embroidered ball itself has a long history. Often made from discarded clothing as a toy for children, their gift came to represent friendship and affection. To this day in China, the throwing of an embroidered ball from a woman to her beloved in the hope he will catch it to bring about good fortune is an aspect of courtship.

The male will tend to have his mouth open (the lion, not the lover), though reasons for this are disputed. His primary function is guardianship of the structure itself in its solid materialism, and so also other material aspects of the structure such as its solidity and overall prosperity.

She is seen in company with a cub, often held stationary beneath a protective paw mirroring the male with his embroidered ball. This symbolizes her guardianship over the people within the building as the male guards the building itself. Hers is the power of life.

As the tendency is for the male lion to have his mouth open, so the female is often represented with her mouth closed. She is no less fearsome than her male counterpart in the representation of her guardianship. Indeed, it is difficult to imagine a creature more fearsome than a lioness protecting her cubs.

Both lions may be found to have a pearl in their mouths. Traditionally this was carved in such a fashion that it could move freely in the mouth of the sculpture, but was too big to escape through its teeth.

The two of them together should be sited in strict accordance with fengshui practice and theory. As you face the lions from outside, the male should be on the right, the female on the left, both looking outward in their scrutiny of the world beyond that which they guard.

The form of the lions may have settled down in terms of the common elements, but that still leaves considerable room for the interpretation of the individual artist in their representation.

This is clearly seen in the effective open-air (and free), gallery provided by the Grand Metropark Wanshi Hotel in Taiyuan, the capital of Shanxi Province. In 2003, the hotel commissioned over 100 stonemasons to present their own interpretations of guardian lions. Aside from the male and the female flanking the entrance itself, the results of their labor are lined up along the walls surrounding the hotel. Their association with security and happiness have made the hotel particularly popular for wedding gatherings.

If you want to see the lions for yourself, the hotel is located on Pingyang Road, not very far from the airport and the railway station. There is no direct bus route from the city center, but the hotel is well-known and a taxi can take you there for some 20 yuan.

All the images in this item are courtesy of the hotel's over 100 guardians. Here we present a selection, focusing upon their faces, in order for you to see the extraordinary range of inspiration that went into their creation. Once you have viewed them, hopefully you will see those you pass on the street with a new appreciation, recognizing in them the ideas of the artists who created them rather than seeing 'just another stone lion'.

Few nations on earth have as rich and diverse a cultural heritage as that of China. Since 1959, China Highlights has specialized in opening up that diversity to the interested visitor. Whatever inspires you to visit the Middle Kingdom, China Highlights can provide you with a tour tailored to your specific requirements.

To show the immense variation between individual lions, below are some for you to examine. See the range of expressions, features, and likenesses.

If some seem similar to others, look again. Noses, eyes, mouths, teeth, stylized manes, each element makes each lion distinct from all its fellows. Some with their heads turned to be seen in profile, others with their heads cocked quizzically, some even with a lion cub on one shoulder.

No pupils and pointed tongue