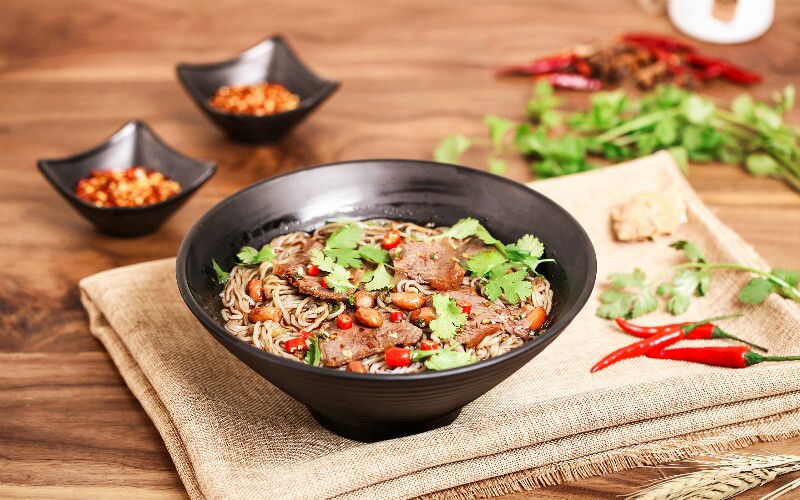 Noodles are eaten throughout China

"I would prefer no house to live in, rather than no noodles to eat." This old Chinese saying represents the enthusiasm of Chinese people for noodles.

China is the homeland of noodles, and the earliest record of noodles in China shows they have a history of 4,000 years. Nowadays, Chinese people eat noodles as a staple food, snack, or as a delicious dish in a feast.

The Difference Between Pasta and Chinese Noodles

The chef is making noodles in Xi'an roadside

Pasta is usually served in long and straight pieces, as well as being cut into ribbons or short pieces. Nearly all Chinese noodles, on the other hand, are served in long, uncut pieces. This is because long noodles are a symbol of longevity in Chinese tradition. Therefore, during birthday celebrations, people serve "longevity noodles" hoping for a long life. See more on Chinese Food Symbolism.

Nowadays, most pasta is manufactured or extruded by machine. In China, many restaurants produce noodles in the ancient way — by hand. Some restaurants have an open kitchen, where you can see the chef making the noodles by kneading, pulling, peeling, and cutting them.

Because of the different methods of preparation and the use of varying ingredients, there are over 1,000 types of noodle, each with local characteristics. Some famous types can be found all over China.

Each city has its own specialty. Among the numerous types of noodles in China, we have summarized the most famous and important ones below.

Beijing soybean paste noodles is a staple dish in the capital, and it’s one of the cheapest dishes to buy. It is available in most restaurants serving Beijing-style food and snacks, or from smaller noodle restaurants scattered in Beijing's many alleys.

The dish is relatively simple: noodles (of the thin, square variety made of wheat), soybean paste, a little bit of pork in the soybean paste, and topped off with cucumber. The bowl comes with each ingredient added individually, so you'll have to stir the dish to get a tasty bowl of noodles (ask the chef for help if you have trouble using chopsticks).

Read more about Beijing cuisine and the 8 Best Restaurants to Eat Noodles in Beijing.

Lanzhou hand-pulled noodles with beef are also known as "Lanzhou beef noodles" and are one of the most common dishes in the local area. Visitors can feast on them at every corner of the city. The noodles are handmade and it only takes an experienced cook one or two minutes to stretch the dough into many needle-thin noodles.

Small restaurants serving Lanzhou beef noodles can be found in almost every Chinese city, especially the bigger ones. However, most of them are hidden in small alleys or back streets. These smaller stores also tend to have the best noodles with the tastiest broth.

Check these famous restaurants in Lanzhou.

Chengdu dandan noodles are probably the spiciest noodles on this list, but they are definitely worth a try. People often find that the spicy noodles are addictive. This is no surprise, considering that Chengdu is the capital of Sichuan Province, where Sichuan cuisine originates from.

Rice noodles are one of the most popular types of dish eaten for a typical Guilin breakfast, and you can find these noodles for sale on almost every street. It is one of the must-taste foods when you travel to Guilin.

Read more about Guilin rice noodles and the Most Popular Guilin Dishes You Should Eat.

Xi'an sliced noodles are not only popular throughout Shaanxi Province but also the entire country. They are best eaten in Xi'an's Muslim Quarter, or at one of Xi'an's many popular night markets, along with other popular Shaanxi snacks.

The noodles can be served with meat or vegetables, depending on your preference. Most restaurants also have their own specialty, which is generally lamb and some vegetables. You can tell that the chewy noodles used in Xi'an sliced noodles aren't made using machines as they are all different sizes, in both breadth and length.

When ordering the spicy noodles, it is possible to customize them to your preferences, such as thinner/thicker/harder/softer noodles and more or less spicy, as well as less soup, more vegetables, or no garlic.

Read about more things to eat in Chongqing.

Kunming's "crossing the bridge" noodles are a must-try for anyone visiting the capital of Yunnan Province in Southwest China.

Upon ordering the noodles, you'll be presented with a large bowl of boiling broth and all the noodle dish ingredients on the side. The vegetables will be raw and the meat will be lightly cooked. The ingredients may consist of, but are definitely not limited to, beansprouts, egg, chicken, and sausage. Once inside the bowl, the ingredients will cook and the finished soup served in little bowls.

You can get many different combinations ranging in price and, of course, there is the perfect order that includes all the ingredients.

Discover more about Yunnan's cuisine and read more about restaurants in Kunming.

Shaanxi’s biangbiang noodles are famous not only for their flavor but also for the Chinese character "biang" in the name. The noodles got their name from the sound "biang biang", which occurs when they’re being made. The noodles are about 2–3 centimeters wide and 1 meter long, like a belt, which is why they are also called "belt noodles".

Pour the cooked noodles in the soup and top them with soy sauce, vinegar, red pepper, and other seasonings. Drizzle hot oil over the top, then your bowl of biangbiang noodles is ready to serve. Many biangbiang noodle restaurants have open kitchens and it is fun to watch the chefs stretching the noodles.

Henan Braised noodles is a famous dish in Central China. Zhengzhou, the capital of Henan Province, is praised as being the "City of Braised Noodles" and you will find braised noodle restaurants in every corner of the city.

The noodles are broad and tough, and the flavor depends on the soup they are served in. Chefs use the best cuts of fresh mutton and boil the meat with goat bones for over 5 hours until the soup is as white as milk. Served together with vegetables, agarics, and other seasonings, the braised noodles are delicious and nutritious.

A serving of Guangdong’s wonton noodles contains wontons, noodles, and soup in one bowl. A wonton (or Yuntun) is a type of dumpling with very thin skin that’s filled with pork and shrimp. The noodles are made from eggs and flour, and water should not be added when making them as this would make the noodles slippery or crispy depending on how they are cooked.

Cantonese people (natives of Guangdong and the surrounding area) prefer mild flavors and like to eat soup. This dietary habit is reflected in the making of wonton noodle soup.

The soup is stewed with fish, shrimp roe, and pig bones. Unlike the way it is cooked in North China, it contains less oil and no chili. If you are not interested in eating spicy and greasy noodles, a bowl of wonton noodles is a mild and fresh choice.

Create a China Trip to Taste Delicious Chinese Noodles with Us

As you can see, noodles alone will keep you traveling around the whole of China, and we haven't even started on dumplings. See our most popular Chinese food tour to eat delicious Chinese food including noodles: