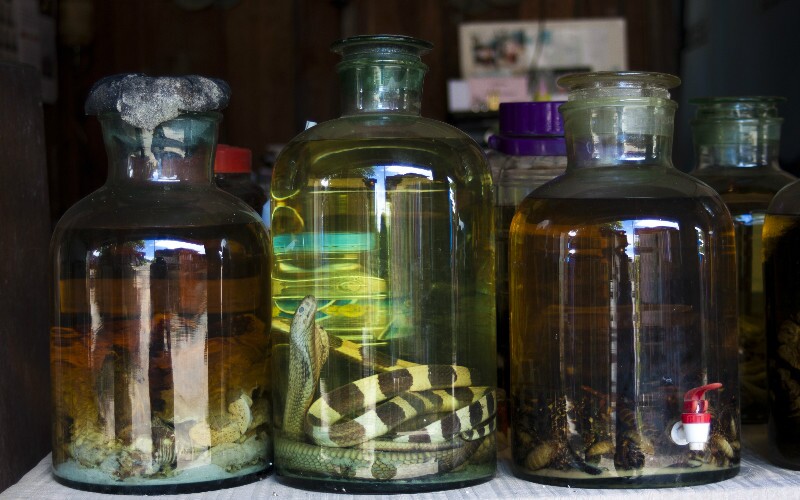 Chinese medical wine is an alcoholic drink produced by soaking herbs, reptiles and mammals in rice wine or grain alcohol. It is very popular among Chinese people because of its nourishing and tonic functions.

According to Traditional Chinese Medicine science, each human body consists of Yin and Yang inside. The concept of Yin and Yang in Chinese philosophy is used to describe complementary opposites, such as the sun and moon, day and night, light and dark, masculine and feminine. Yin is seen as feminine, dark and passive.

Yang is seen as masculine, light and active. In this concept, females are deemed to have more Yin energy and males to have more Yang energy. Everything has its balance of Yin and Yang. For people who are suffering from a chronic disease, such as general asthenia and rheumatic pain, it is considered that the Yang energy is being lost quickly from their bodies, and they feel weaker with little Yang energy. In this case, Chinese medical wine plays an important role in gathering Yang energy by reinforcing their bodily fluid and nourishing the blood.

In ancient times, alcohol was widely used as a treatment for external injuries by physicians of all dynasties and this is still working now. As well as its antiseptic properties, alcohol itself has an effect on improving blood circulation and relaxing muscles and joints. In addition, alcohol is an effective solvent, which may extract a higher proportion of ingredients from medical ingredients. Medical wine is usually made up of different Chinese traditional herbs.

Chinese people like to use precious medical ingredients to make medical wine. Commonly used medical ingredients are ginseng, aweto, Chinese wolfberry, snake and centipede. Different medical ingredients in wine have different effects. Snake wine is probably the most popular one overall. Jars of snake wine are displayed and sold in many Chinese pharmacies. The snakes for making snake wine are the most venomous. It is said that the alcohol can denature the venom, break down the proteins in the poison and retain the "essence" of the venom. Drinking snake wine helps to nourish the kidneys, generate blood, dispel cold and treat rheumatism, among other uses. Chinese wolfberry wine is also favored by the majority of people because it helps to lower blood sugar and cholesterol. Rose wine is called "ladies' wine" since it is beneficial to improve complexions and reduce pigmentation caused by age or pregnancy.

Medical wine is made under the guidance of the Traditional Chinese Medicine theory. It has certain medical properties. Although medical wine is good for the human body, it cannot be overly consumed. Normally 30-50 ml per day is an adequate amount for people. For Western people, it's better to take it under the direction of an herbalist doctor. Our tours are customizable, so you can discover more of what you’re interested in. See our recommended First –time-to China tours below, or let us tailor-make your journey of discovery according to your requirements.