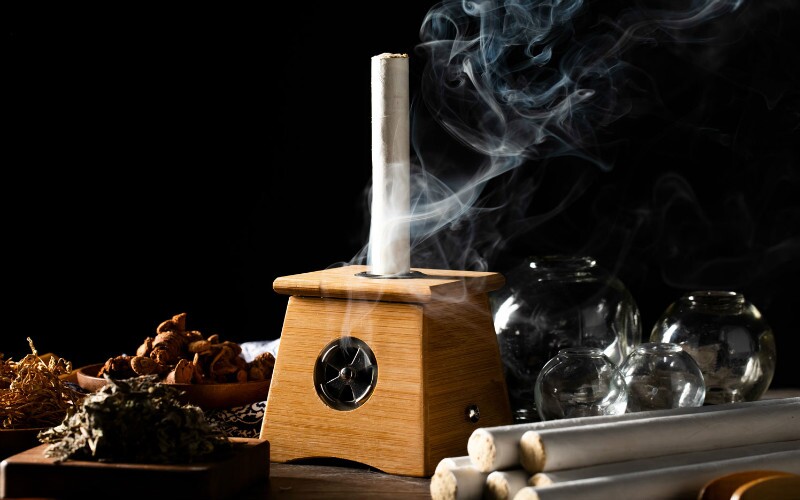 You probably have seen moxibustion (灸 jiǔ, /jyoh/) done in kung fu or martial arts movies. It is thought to be useful for healing injuries and relieving pain. Moxibustion is little practiced in China nowadays.

Moxibustion has a long history, and it is an interesting and perhaps beneficial healing technique. Here is some information on the theory, method, history, and general acceptance of moxibustion now.

Practitioners think that an injured part of the body needs more Yang and qi. It is also especially useful for people with injuries or sickness arising from cold weather or freezing, woman who are having trouble with a pregnancy, old people, and other people with a problem of too much Yin and not enough qi. The technique is similar to acupuncture in that it is meant to stimulate the flow of qi.

How is Moxibustion Performed?

The common herb mugwort is burned over acupuncture points or at other spots on the body. Little lumps of mugwort may be used to do this, or a long cigar-like roll of it may be used. It may be burned directly on the skin causing a blister or maybe a scar, or it may be burned close to the body. For direct moxibustion, the herb is burned on the skin. Indirect moxibustion is more popular since it is less painful. People can perform the moxibustion on themselves quite easily if they know the proper spot to stimulate. However, it is thought that it is harmful to do moxibustion on a person or body part that already has too much Yang, so it isn’t generally recommended for healthy young men.

How Does Moxibustion Work?

It is thought that the heat and smoke of the burning mugwort can expel the yin in the body, warm meridians, and cause blood and qi to flow more smoothly. It is thought that burning the mugwort can rid a part of the body of qi also. The mugwort smoke also has mild hallucinogenic and antibiotic effects, and its known medicinal effect is as an herbal stimulant to increase blood circulation and elevate body temperature. So part of the therapeutic effect of moxibustion may be due to breathing the pungent mugwort smoke itself.

The History of Moxibustion

Mugwort Herb is Used Around the World

It is interesting that the mugwort plant itself is an herb that has long been used around the world for many of the same conditions that traditional Chinese practitioners practice moxibustion to cure. People in cultures all over the world have long thought that it has similar healing, heating and stimulating effects. It is used as a female health tonic and for women’s fertility. In Europe, it was used for these purposes, as a remedy for cold weather, and to prevent frostbite, and it still is used in herbal remedies, beer, and as an herbal tea.

The Yellow Emperor’s Inner Canon 黄帝内经 (Huángdì Nèijīng) is the first record of the method of moxibustion applied to acupuncture points. It dates from the Han Dynasty era (206 BC-220 AD) more than 2,000 years ago. This description of the technique seems similar to how moxibustion is performed nowadays, so moxibustion has a recorded history of at least about 2,200 years. The techniques later spread to Korea and Japan, and now the techniques are applied all over the world. Various scientific studies have been performed, but generally Western medical societies don’t accept it as a viable alternative for Western medicine. However, Western practitioners think that it is a especially effective technique for turning breech babies. The burning mugwort is applied to the outside side of the little toes, and some studies claim a high success rate of the babies then turning themselves to be in the correct position. In China itself, it is rare in many areas of the country.