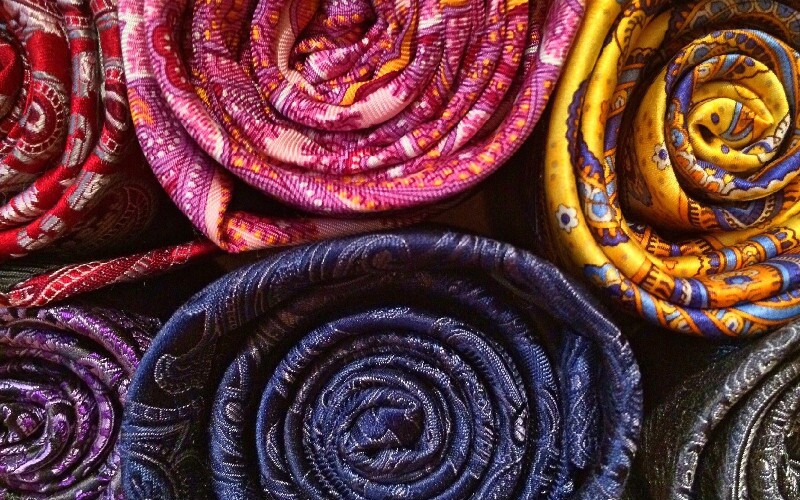 Silk is more than just a fabric in China: it is their history, their culture, fashion and a symbol of prosperity. Not only is China the world's largest producer of silk, but also silk has a huge influence on its tourism, with many silk attractions, including the Silk Road, qipaos, and Hangzhou Silk Museum. Here are 12 fascinating facts about silk and its culture in China.

The Silk Road had its beginnings around 130 BC when the Han Government dispatched General Zhang Qian as an envoy to build good relationships with small nomadic states west of China.

Then Chinese transported silk, tea, and other products along the Silk Road route, to exchange them for horses with small kingdoms in the west of China.

Silk trade was confined to China until the Silk Road became the world's longest ancient overland trade route, in the latter half of the first century BC. The Silk Road actually refers to a number of ancient trade routes linking China and Central Asia, and Europe.

The Silk Road grew in influence because of the popularity of silk as one of the main products ferried through it. For instance, Romans, Greeks, and Egyptians preferred the luxuriousness of Chinese silk.

Marco Polo traveled the ancient road to bring tales and products of China back to Europe.

Read more on the history of the Silk Road.

For thousands of years, China held a monopoly over the distribution of silk and held onto the practice for centuries. Up until the beginnings of the Tang Dynasty, no other nation in the world knew how to make silk and relied on China for silk.

Silk has long been the epicenter of fashion in China, with Shanghai being the silk fashion capital, although it is also used in other cities.

Silk is used to produce qipaos, which became popular in Shanghai in the interwar period, and are still popular as evening wear or party attire in China.

Young designers like Uma Wang and Christine Lau use silk designs to offer statements on feminism.

The best places to buy qipaos are in Shanghai. You can also tailor-make a qipao in Beijing and other cities as well.

4. Silk was reputedly discovered in a cup of tea.

As narrates Confucius, Lei Zu, who was the wife of the Yellow Emperor Huangdi, discovered silk in 2,700 BC after a cocoon dropped into her tea, and, as she attempted to pull it out, silk thread unraveled. Whether the account is true or not, Lei Zu is now renowned through China as the Goddess of Silkworms (Seini-Than).

China not only discovered silk long ago, but also pioneered silk dyeing in different colors.

During ancient times, white silk was achieved by feeding home-grown silkworms only with leaves of white (garden) mulberry during the breeding period. To get yellow silk, the silkworms were fed with Je tree (wild mulberry growing in mountains) leaves during the first half of their life, and garden mulberry leaves in the second.

5. Silk is still made the same way it always has been.

A silk factory in China

Sericulture is the raising of silkworms and unwinding of their cocoons. After over three thousand years, Chinese silk is still manufactured from intensive silkworm care. However, the process has now been mechanized.

The level of care determines the quality of silk. The eggs are soaked in chemicals to hasten hatching, then the worms are fed with mulberry leaves regularly.

The worms are kept in rooms at a temperature between 24–27°C (75–80°F) and the room is lighted around the clock. The rooms must also be kept clean and the worms are kept free from drafts, smoke, odors, and noise.

During their three to eight day pupating period, the silkworm secretes filament meant to be a part of its cocoon that stretches one kilometer in length. This is then combined with modern chemical processes used to strengthen the silk. Unfortunately, silkworms are killed in this process, more than ten billion of them each year.

6. Silk was a status symbol in ancient China.

Silk was a symbol of wealth and power in ancient China, because only the rich and those in authority were allowed to wear silk garments, while poor people were prevented from wearing it.

Then poor people wore clothes of hemp or ramie, which are nettle-like plants. But, eventually, ordinary people started wearing silk.

Silk was used to weave ceremonial garments and gifts to foreign dignitaries.

Silk was so valued in ancient China that anyone found smuggling silkworm eggs, cocoons, or mulberry seeds was put to death.

7. Ancient silk items have been unearthed in archeological sites.

Half a silkworm cocoon was unearthed in 1927 from the loess soil astride the Yellow River in Shanxi Province and is said to date back to between 2600 and 2300 BC.

Ribbons, threads and woven fragments, dating about 3000 BC were also unearthed at Qianshanyang in Zhejiang Province.

A small ivory cup carved with a silkworm design, thought to date between 6000 and 7000, was recently unearthed along the lower Yangtze River alongside spinning tools, silk thread, and fabric fragments.

8. Zhejiang Province is "King of Silk".

Zhejiang Province is termed "King of Silk" because it produces a third of China's raw silk, brocade, and satin. The city of Suzhou, located near Zhejiang in the Jiangsu Province, captured Marco Polo's attention as early as 1276 due to their fame in silk production.

Marco Polo wrote: "They have vast quantities of raw silk, and manufacture it, not only for their own consumption, all of them being clothed in dresses of silk, but also for other markets."

Other regions that act as major producers of silk are Jiangsu, and Sichuan provinces and cities of Suzhou, Hangzhou, Nanjing, and Shaoxing.

Tens of million of visitors travel to China every year with an appetite for silk or its culture and history. Many tour the Silk Road.

Around 1015, for fear of invasion by Tibetans, Tangut Buddhist monks were said to have hidden away ten thousand manuscripts and silk paintings, silk banners, and textiles into a room at the Caves of the Thousand Buddhas near Dunhuang, a station on the Silk Road in northwest Gansu.

Another popular silk-related destination is the Hangzhou Silk Museum, the largest of its kind in the world, which showcases the origin, evolution and techniques of silk production, and has sections devoted to the Silk Road and its importance in China commerce.

10. Silk had many applications beyond clothing.

Apart from making clothes, silk was applied in medicine, as a currency, or medium of exchange, and it was used to make the first type of luxury paper in China.

Chinese doctors have applied silk prostheses in the treatment of diseased arteries. In 1950, Dr. Feng Youxian, having read about grafts in vascular surgery in the United States and for lack of synthetics, applied silk in his first surgery. The material for his first operation was clipped from his shirt and sewn into a tube by his wife.

Although ancient China had copper coins as a medium of exchange, silk naturally remained the medium of exchange in Central Asia for centuries because it was the most popular commodity along the Silk Road route.

According to Kharosthi documents that date to late third or early fourth century AD, silk fabric and garments were used in Central Asia to pay for transactions.

Chinese documents originating from Turpan also show that bolts of silk were used as money. Silk was so dominant that coins were valued in terms of bolts of silk.

For instance, the price of a woman was forty one bolts of silk. Monks who broke Buddhist monastery rules were charged fines in terms of bolts of silk. A female slave was worth three and a half bolts of Kucha silk in the fifth century.

11. Silk trade contributed to the adoption and spread of Buddhism in China

The Silk Road through the deserts of northern China became one of the two natural land routes for Buddhists, Buddhist teachers, scriptures, and monks to enter China from other Buddhist regions. Another major route was through Yunnan, and is called the Tea Horse Road or Southern Silk Road.

In 130 BC, Han rulers sent Zhang Qian to the Caucasian Yuezhi (who first lived in Xinjiang but were pushed towards India in 177 BC by the Xiongnu and later became Buddhists) for trade interests.

Buddhism was being taught in China as early as 2 BC. Buddhist temple sites such as the Bingling Grottoes, Mogao Grottoes and Xingjiao Temple were later built. The Bingling Grottoes near Lanzhou in Gansu Province, for instance, has an array of statuary and frescoes dating from about 420 to the Ming Dynasty.

When traveling to China, tourists may also want to try eating the silk worms too like the Chinese do. Billions of silkworms that die during the process of making silk are not wasted, but are eaten.

The leftover silkworms are packaged, seasoned, boiled, fried, or stewed in a dish literally known as as "tasty, crispy silkworm", similar to French fries for the adventurous foodie. After the removal of silk, the shrimp-size silkworm pupae are taken to hotels and stir fried in garlic, ginger, pepper, soy sauce, and oil.

In addition to touring attractions with links to silk history and culture, China Highlights can help you visit silk factories to see silk production and purchase silk clothing and other silk products direct from the manufacturer.