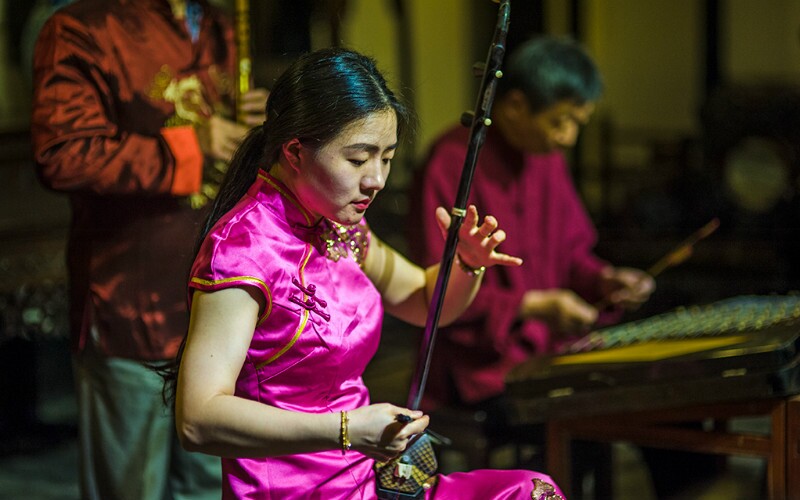 Plum-Blossom in Three Movements is a flute song, composed by Hengyi(桓衣), who was a famous militarist and musician in the Eastern Jin Dynasty (317-420). Now there is also a Guqin (古琴, a seven-stringed plucked instrument) version. The theme of the song is to praise the gritty spirit of plum: blossom in the severe winter.

Guangling is the old name of Yangzhou. Music from Guangling means that this song was very popular in Guangling area in the ancient time. This song is the only one that describes war by Guqin (古琴, a seven-stringed plucked instrument), and it shows rebel spirit of the oppressed, so the song contains a high rank of idelological content and art.

Wild Geese over the Clam Sands is a Guqin (古琴, a seven-stringed plucked instrument) song, but there are many schools of spectrum. The song aims at expressing scholars’ breadth of mind throng the aspiration of geese. The tones of the song is smoothly rising and falling, through appearing indistinctly geese honking to describe the geese hovering on the sky.

Ambush on All Sides 十面埋伏 Ambush on All Sides is a popular Pipa (琵琶, a four-stringed plucked music instrument) song that uses historical subject. It is not known when the song was composed. The song describes the scene of Chu-Han war (BC206-BC202, after the perishing of the Qin Dynasty, Chu State and Han State wanted to unified the country, then the war began.), which was quite earthshaking.

Flute and Drum at Sunset 夕阳箫鼓

Flute and Drum at Sunset is one of the famous ancient Pipa (琵琶, a four-stringed plucked music instrument) songs, having been popular since the Ming (1368-1644) and Qing Dynasty (1636-1911). It is a lyrics song with beautiful and elegant tones to describe a pretty landscape picture scroll.

Dialog between Fisherman and Woodcutter 渔礁问答

Dialog between Fisherman and Woodcutter is a Guqin (古琴, a seven-stringed plucked instrument) ?song, firstly appeared in the Ming Dynasty (1368-1644). With vivid and accurate musical image, this song reflects scholars’ yearning for the life of fisherman so that they can get rid of the tired official circles.

The Eighteen Beat of Wu Gier is a Guqin (古琴, a seven-stringed plucked instrument) song, made up by 18 songs combinations. It is said that the song was composed by Cai Wenji (蔡文姬), which is used to express Wenji’s homesickness, the misery of separating from her son and her formidable complaints.

The Moon over the Han Palace 汉宫秋月

The Spring Snow is one of the most famous Guqin (古琴, a seven-stringed plucked instrument) songs. It is said that the song was composed by Shikuang (师旷, a musician from Jin State) and Liu Juanzi (刘涓子, a musician from Qi State) in the Spring and Autumn Period (BC 770-BC403, or BC770-BC476). With pure and smooth melodies and relaxed and lively rhythm, the song shows the coming of spring, the recovery of the earth and the prosperousness of everything.