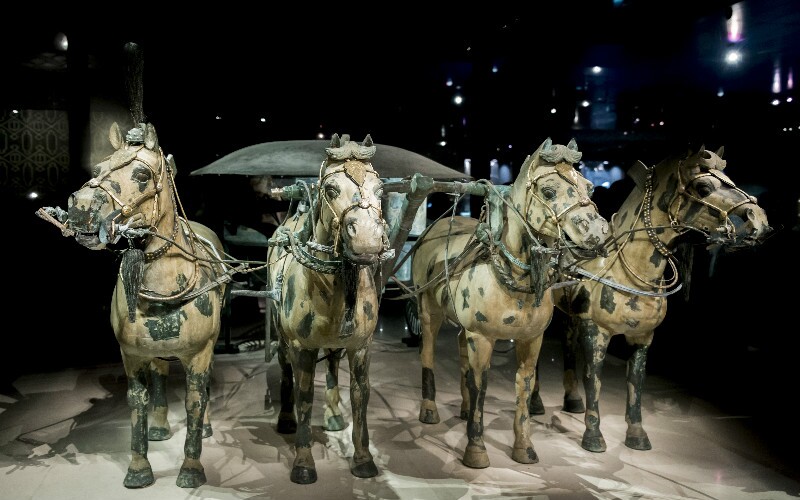 The Original Colors of the Terracotta Army

The Terracotta Army is regarded as one of the greatest archaeological finds in the world, and one of the greatest discoveries of the 20th century. Via the amazing complex built to accompany Emperor Qin Shi Huang’s tomb, people can catch a glimpse of the Qin Empire’s prosperity.

The Terracotta Army Used to Be Colorful At the very beginning, when the Army was made, the whole army, including warriors, chariots and horses, was painted and looked more colorful than it does today.

They suffered slow oxidation giving way to humid saturation due to groundwater seepage for 2,180 years, followed by rapid oxidation and dehydration in 1974 when the vaults were opened and exposed to the atmosphere. The color coating was severely damaged, then aged and peeled off.

“Practically every warrior and horse was painted, but having been buried for more than 2,200 years the pigments were so old they began to change just 15 seconds after they were unearthed. Within four minutes the painting layers bound together by pigments became dehydrated, tilted and broke from the surface.”

The Original Colors of the Terracotta Army According to statistics, dozens of colors were painted on the Terracotta Army, including soft green, vermillion, claret red, pink, azure, white, and so on. Among them, the first four colors were the most common.

Different types of warrior were painted different colors. General statues were painted with complicated colors and with more elaborate detail than normal statues. In addition, statues with special posture, such as the famous kneeling archer statue, were also painted more exquisitely.

The Terracotta Warriors were still colorful when they were unearthed. Relics-protection experts found that the purple (later named ‘Chinese purple’) appearing on the terracotta statues was a kind of artificial color. The basic pigment is synthetic barium copper silicate, not found in nature. Even today, it’s still hard to make.

The craftsmanship for Chinese purple disappeared after the Han dynasty (206 BC-220 AD) and how ancient Chinese people ever concocted this rare color became a mystery.

The Fading Colors of the Terracotta Army

The reason for the terracotta army’s fading colors has been ascertained: the adhesive force between painting layers was weak. The bottom was made of raw lacquer which is very sensitive to dehydration. It cracked and disintegrated, and then the painted colors were damaged.

Protection for the Terracotta Army Protection and repair work began as soon as the Terracotta Army was found in 1974. In 1982, the museum organized a special team to carry out research on terracotta painting. The team cooperates with many overseas institutions to find solutions to problems.

Though the technology for color protection has made great progress, colors can still only last about 10 years. The technology is still limited. Because of this, only a small proportion of the whole great Terracotta Army has been fully explored.

Only after the technology has matured, will the massive magic underground world be unveiled to the world. The Terracotta Warriors and Horses are rich in history and culture. It is recommended to visit them with a knowledgeable guide who can share background information with you and help you avoid the crowds.

Below are our two most popular tours which include a visit to the Terracotta Army:

See more of our Xi’an tours. The tours are customizable - tell us your interests and we will help you tailor-make a Xi’an tour.