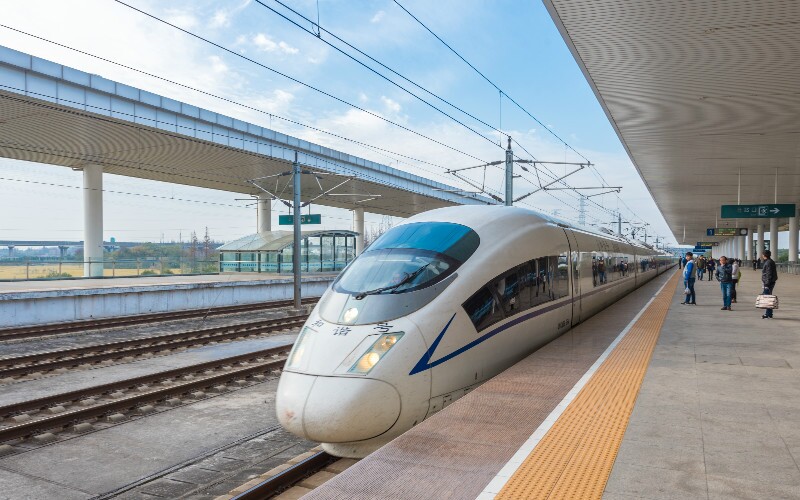 Xi'an Transportation: Getting to/from Xi’an by Plane and Train Xi'an, in addition to being a popular tourist destination, has an extensive transport network that makes it possible for tourists to access almost all major attractions.

There are almost unlimited choices with regard to means of transport when traveling to, from and around the city. In addition, it is well connected to other major towns and cities for those interested in China inter-city tours.

Getting to/from Xi'an by Air

Xi'an is served by a dozen of airlines to and from major tourist stops such as Beijing, Shanghai, Guangzhou, Chengdu, Urumqi.

See our Round Day Trip from Beijing to Xi'an by flight for some inspiration.

The major airport, Xianyang Airport, is 45 kilometers from the city. It is also served by international flights to and from Hong Kong, Macau and Japan. Search for Chinese domestic flights and airfares here.

Transport from the Airport There are intercity buses that leave the airport for cities around Shaanxi Province.

You can use the following shuttle buses from Xianyang Airport to reach the Bell Tower and other nearby attractions or destinations.

Airport Shuttle Line 2 will take you to Xi'an Railway Station (note that this is different from Xi'an North Railway Station) directly from the airport or vice versa.

Getting to/from Xi'an by Train

Train is a good way to have comfortable inter-city tours from Xi'an to Beijing, Chengdu, Guangzhou, Shanghai and Wuhan, among other towns/cities.

It is possible to take a bullet train from Beijing to Xi'an in 5 hours. It is convenient for travelers to visit the Terracotta Army from Beijing. It is a much cost-efficient and time-saving option compared to flight. If you would like to take a side trip to Mount Hua, you can take a bullet train to go there within one hour.

It is convenient to travel by train from Xi'an to major cities like Beijing, Guangzhou, Nanjing, and Shanghai.

A high-speed train (G train and D train) is a good option in terms of speed, facilities, and service.

If you are interested in experiencing bullet train in China, tell us and we are glad to arrange it into your tour.

Line 1 and Line 2 are the main lines of the Xi'an Metro System and their schedules are as follows. Line 3 is now complete and more lines are under construction. See our Xi'an Metro Map. Taking a public bus is very efficient and cost-effective for nearby local attractions within the city.

A popular route for tourists is the #610 ("游8" in Chinese - meaning "tourist number eight"). The route connects to and from the Xi'an railway station, the Bell Tower, the Small Goose Pagoda and Xi'an Museum, the Shaanxi Historic Museum and the Big Goose Pagoda, which are popular attraction sites around the city.

Bus 306 boarded at the Xi'an station (the public ones are boarded from outside not inside the city wall) takes tourists to the Terracotta Warrior Army Museum, Huaqing Palace and hot springs at the foot of Li Shan in Lintong County. Alternatively, use number 914 and 915 to got to the Terracotta Army. Bus number 42 also goes to the Banpo Village Ruins and Shaanxi Historic Museum.

Bus 611 is a more frequent option to connect to the Bell Tower from the train station and a good alternative to line number 609. Tourists also use the Tourism Bus Line 1 boarded at the Xi'an Railway Station to go to attractions far away from town such as Huashan Mountain.

Long distance bus stations in Xi'an are Xi'an Bus Station, Nanguan Bus Station and the East City Bus Station. The other option is taking a bus at the Shaanxi Province Long-distance Bus Station, which is 100 m from Xi'an railway station. A taxi in Xi'an

Taxis and private transport are very efficient for far-away-from-the-city attractions, such as the Terracotta Warriors and Mount Hua.

Taxis in Xi'an are not as well regulated as in other big cities, and the drivers may try to scam tourists who generally don’t know what the money looks like, the travel routes, and other ways of being tricked.

Our private transport (with a guide for all your questions and translation needs) offers a far more reliable and fulfilling alternative to taxis. Contact us to make arrangements. Cycling on the Xi'an Ancient City Wall is popular.

A fortunate thing for tourists is that major attractions (with the exception of the Terracotta Warriors) are bunched together. Hence it is possible to access them using bikes, especially so because there are bike lanes on some streets.

Bicycles are the best for visiting attractions in central Xi'an including the Drum Tower, the City Wall, and the Bell Tower.

Cycling on the Xi'an Ancient City Wall is particularly popular. For tourists, there are a number of bikes available for rent to cycle around the wall (it's distance is 13.7 kilometers, height is 12 meters tall and is 15 meters-wide wall on top. It is the largest city wall in the world).

We help you avoid all the problems of public transportation in Xi'an, from exposure to counterfeit money, to getting lost, to fake rides by rogue drivers.

In addition, each tour can be customized to your needs. Here are some recommended tours.